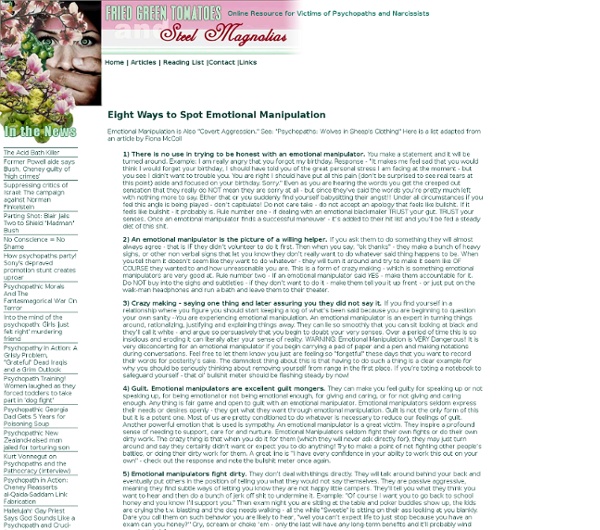 Color Psychology by David Johnson Like death and taxes, there is no escaping color. It is ubiquitous. Yet what does it all mean? Why are people more relaxed in green rooms? Why do weightlifters do their best in blue gyms? Top 10 Things That Determine Happiness photo: meddygarnet Happiness is, by nature, a subjective quality with a definition like a moving target. There is scant evidence — qualitative or quantitative — to lend convincing support to those life variables most critical in determining individual happiness, which is likely why past researchers committed to the scientific method rarely tried to tackle the subject. This is changing. Take, for example, the World Database of Happiness in Rotterdam, self-described as a, “continuous register of scientific research on subjective appreciation of life.” Also, take the positive psychologists, a movement whose “members” perform scientific research into the nature of happiness and who published Character Strengths and Virtues: A Handbook and Classification, an 800-page behemoth that outlines all the characteristics, behaviors and conditions that lead to happiness.

Get Anyone to Like You – Instantly – Guaranteed Get anyone to like you - Instantly - Guaranteed If you want people to like you, make them feel good about themselves. This golden rule of friendship works every time - guaranteed! Viewbix Brand your video Make it your own! Add your logo and contact info. Intellectually-honest and intellectually-dishonest debate tactics – John T. Reed Copyright by John T. Reed This Web site is, in part, a debate between me and others with whom I take various issues. Peter Principle An illustration visualizing the Peter principle The Peter Principle is a concept in management theory in which the selection of a candidate for a position is based on the candidate's performance in his or her current role rather than on abilities relevant to the intended role. Thus, employees only stop being promoted once they can no longer perform effectively, and "managers rise to the level of their incompetence." The principle is named after Laurence J. Peter who co-authored with Raymond Hull the humorous 1969 book The Peter Principle: Why Things Always Go Wrong. Overview[edit]

Welcome to Adobe GoLive 6 From Los Angeles Times: It's not all about you Chances are, others aren't judging you as harshly as you think, if at all. By Benedict Carey www.columbia.edu/~sss31/rainbow/murphy.combat.html 1. If the enemy is in range, so are you. 2. Incoming fire has the right of way. 3. Don't look conspicuous, it draws fire. 4. There is always a way. 5. The Origin of Consciousness in the Breakdown of the Bicameral Mind In this book, Jaynes theorizes that ancient consciousness was radically different from modern consciousness. He suggests that ancient human beings had no sense of an interior, directing self. Rather, they accepted commands from what appeared to them to be an externalized agency, which they obeyed blindly, without question. This externalized self was a consequence of the split between the two halves of the brain. Jaynes suggests that the left and right brains were not integrated—"unicameral"—they way they are today. Rather, the ancient brain was "bicameral," with the two brains working essentially independently of each other.

Dunning–Kruger effect The Dunning–Kruger effect is a cognitive bias wherein relatively unskilled individuals suffer from illusory superiority, mistakenly assessing their ability to be much higher than is accurate. The bias was first experimentally observed by David Dunning and Justin Kruger of Cornell University in 1999. Dunning and Kruger attributed the bias to the metacognitive inability of the unskilled to evaluate their own ability level accurately.