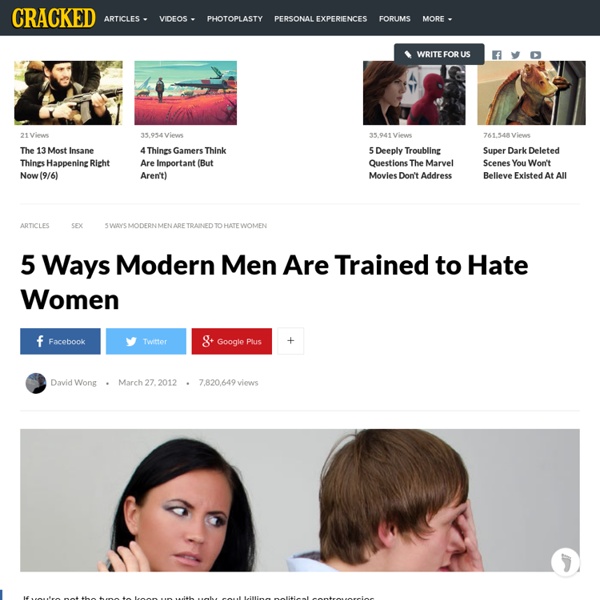 Photos.com I don't know what it's like to be a woman, so it's not easy for me to describe what it's like to be a man, because I don't know what you're using for context. I'm going to do my best: Did you ever watch old cartoons where a character is starving on a desert island, and when another character approaches, he's so hungry that he imagines the other character as a talking piece of food? Via TV TropesThird panel omitted due to graphic content. It's like that for most men, most of the time. Right now I'm reading a book from mega-selling fantasy author George R. "When she went to the stables, she wore faded sandsilk pants and woven grass sandals. That's written from the woman's point of view. Do you see what I'm getting at? Photos.comWe also assume you have the taste of a pimp. Go look at a city skyline. All those wars we fight? It's all about you. Photos.comNope. This is really the heart of it, right here. Which brings us back to where we started. Via Wikipedia Via Caglecartoons.com

Eight-COW WIFE The Eight-Cow Wife by Patricia McGerr, Adapted and edited from it's original appearance in Reader’s Digest, February 1988, pp138-141 The rise of enlightened sexism - The Scavenger Details Published: 12 February 2011 Hits: 4589 Enlightened sexism is a new, subtle, sneaky form of sexism that seems to accept – even celebrate – female achievements on the surface, but is really about repudiating feminism and keeping women, especially young women, in their place, writes Susan J. Get Internet Access When Your Government Shuts It Down These days, no popular movement goes without an Internet presence of some kind, whether it's organizing on Facebook or spreading the word through Twitter. And as we've seen in Egypt, that means that your Internet connection can be the first to go. Whether you're trying to check in with your family, contact your friends, or simply spread the word, here are a few ways to build some basic network connectivity when you can't rely on your cellular or landline Internet connections. Do-It-Yourself Internet With Ad-Hoc Wi-Fi Even if you've managed to find an Internet connection for yourself, it won't be that helpful in reaching out to your fellow locals if they can't get online to find you. If you're trying to coordinate a group of people in your area and can't rely on an Internet connection, cell phones, or SMS, your best bet could be a wireless mesh network of sorts--essentially, a distributed network of wireless networking devices that can all find each other and communicate with each other.

Create Something. Donate Login Remember Me 5 Mind-Blowing Facts Nobody Told You About Guns After every mass shooting, the gun debate splits into two camps: One side says it easily could have been avoided if these maniacs weren't allowed to have guns; the other says it easily could have been avoided if each innocent victim had only gone through their daily lives in cover formation, armed like the space marines entering the giant murder womb in Aliens. And that's pretty much the entire gun control debate, as far as the mainstream media are willing to cover. And that is a shame, because it leaves out all of the most interesting parts. Trust us, the longer you look into this, the weirder it gets. For instance ...

Arginine, Yohimbe, and Other Erectile Dysfunction Natural "Cures" Experts give their take on remedies such as ginseng, acupuncture, and pomegranate juice. Why do I need to register or sign in for WebMD to save? We will provide you with a dropdown of all your saved articles when you are registered and signed in. By David FreemanWebMD Feature WebMD Archive The Guy's Guide to Being a Feminist Ally in Video Gaming One of the things I hear whenever I write about misogyny in video games is that there’s a silent majority of male gamers who are uncomfortable with the vicious sexism some of their counterparts deploy against women (and frankly, against men, too). Women aren’t alone in feeling hopeless, or like there’s no effective way to change either the behavior of individuals or the culture that leaves space for the harassment of women. So I hopped on Twitter yesterday and asked men who play video games, and who push back against sexist behavior when they see it, what kinds of arguments they’ve found to be effective. Dozens of you responded, with a lot of terrific advice. So if you’ve ever wanted to call out sexism in video games but weren’t sure how to start the conversation or how to make sure it would be productive, here’s the collective wisdom of the internet.

How to make a tablet pc from an old laptop Check out my other projects:Xbox Hackintosh casemod AndDIY Spy phone In this project i used an old Fujitsu Siemens life book S series laptop. It has got a 1 Ghz processor and 256 Mb ram, (not sure about the graphic card but i know its between 8-32 Mb). In this instructable i will show how to do tablet pc the easy way(and the cheapest) , and how to do it hard way (including "touch" screen etc). I personaly did it the hard way about half way and run out of materials and i decided to finish it the easy way. Bizarre Websites On Which You Can Kill Time With Style - Smashing Magazine Modern Web-building technologies allow designers to realize their most daring and creative ideas. Enhanced interactivity and a remarkable visual appearance can be achieved by means of such tools as Flash, JavaScript and Papervision3D, to name just a few. These strengths usually impress and entertain visitors and thus are often used for conceptual artistic presentations and promotional campaigns. In this post, you’ll find a collection of amusing websites that, by combining unconventional (and sometimes bizarre) ideas and clever JavaScript and Flash effects, will entice you to play on them for an embarrassing long time. Bizarre and Beautiful Websites Link Record Tripping1 Record Tripping is a nifty experimental game by Bell Brothers.

After banning the burqa, French lawmakers target floral dresses An embarassing spectacle took hold of the French parliament on Tuesday when a Socialist government minister turned up to work in a floral dress. Rightwing lawmakers raised their eyebrows and hooted as minister of territories and housing, Cécile Duflot, took to the podium to speak about an architecture project. Centrist MP Jean-Christophe Fromantin called on the hecklers to pipe down and listen up, allowing Duflot to address the house. “Ladies and gentlemen,” she began, adding “obviously more gentlemen than ladies…”. The reaction could have gone two ways in France, where the nasty 2011 Dominique Strauss-Kahn affair was initially received with more amusement than ire, and ogling or getting ogled at work comes as part of the job.

Kickstarter of the Week: Plant-In City Offers an Internet of Vegetation Plants are the best. They’re pretty, they clean the air, they’re good listeners, and they don’t eat your furniture. On the downside, they need regular care, and they’re lousy communicators. Designers Huy Bui, Carlos J. Gomez de Llarena, and Jon Schramm have created a system to make your relationship with them easier. Their system, called Plant-In City, proposes to house your greenery in elegant structures that wrap them in a field of sensors to help you monitor their health. The Noticing Game - (moving, sexy, fun) This little game had us both in tears the last time I played it… And the time before that, we were both smiling so much our cheeks hurt… It’s simple, easy, in-the-moment, and you can play it with your lover, a friend, on a date, or with someone you’ve just met.