HOW TO CHEAT AT EVERYTHING 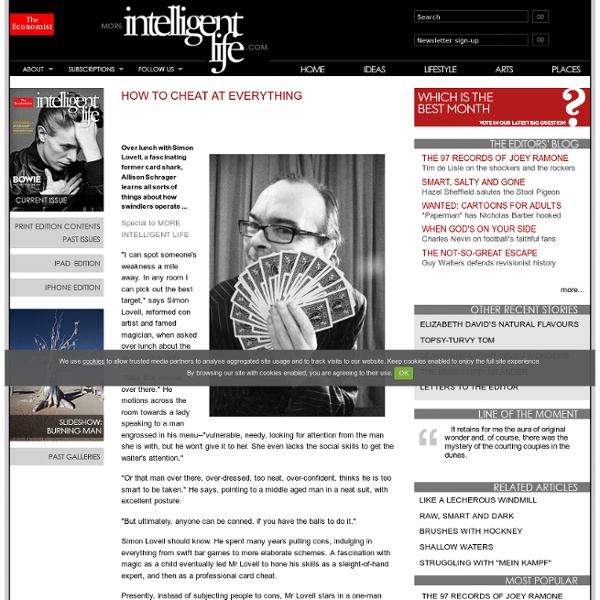 Over lunch with Simon Lovell, a fascinating former card shark, Allison Schrager learns all sorts of things about how swindlers operate ... Special to MORE INTELLIGENT LIFE "I can spot someone's weakness a mile away. In any room I can pick out the best target," says Simon Lovell, reformed con artist and famed magician, when asked over lunch about the root of his talents. "Take that woman over there." He motions across the room towards a lady speaking to a man engrossed in his menu--"vulnerable, needy, looking for attention from the man she is with, but he won't give it to her. "Or that man over there, over-dressed, too neat, over-confident, thinks he is too smart to be taken." "But ultimately, anyone can be conned, if you have the balls to do it." Simon Lovell should know. Presently, instead of subjecting people to cons, Mr Lovell stars in a one-man off-Broadway show, "Strange and Unusual Hobbies". It requires avid study of psychology and body language. But I would make a poor con artist.

Related:  Manipulation and Persuasion • How to...

How to Criticize with Kindness: Philosopher Daniel Dennett on the Four Steps to Arguing Intelligently By Maria Popova “In disputes upon moral or scientific points,” Arthur Martine counseled in his magnificent 1866 guide to the art of conversation, “let your aim be to come at truth, not to conquer your opponent. So you never shall be at a loss in losing the argument, and gaining a new discovery.” Of course, this isn’t what happens most of the time when we argue, both online and off, but especially when we deploy the artillery of our righteousness from behind the comfortable shield of the keyboard.

Twitter: How to archive event hashtags and create an interactive visualization of the conversation Jisc CETIS MASHe The use of Twitter to collecting tweets around an event hashtag allowing participants to share and contribute continues to grow and has even become part of mass media events, various TV shows now having and publicising their own tag. This resource is often lost in time, only tiny snippets being captured in blog posts or summaries using tools like Storify, which often loose the richness of individual conversations between participants. It doesn’t have to be this way. Using a combination of Google Spreadsheets as a data source and a simple web interface to add interactivity it’s possible to let users explorer your entire event hashtag and replay any of conversations. View example conversation replay Try out a LIVE version

Perfect Persuasive Messages Craft messages that change minds using these 20 principles of persuasion, all based on established psychological research. Perfection is hard to achieve in any walk of life and persuasion is no different. It relies on many things going just right at the crucial moment; the perfect synchronisation of source, message and audience. But even if perfection is unlikely, we all need to know what to aim for. How to Knuckle-Roll a Coin Like Doc Holliday If anyone who is still breathing has not seen the movie Tombstone this may come as a surprise, but you can, indeed, roll a coin down the knuckles of your hand. It's very simple to learn, but takes a bit of patience and practice. This instructable will teach you how to do it. Okay, so I really don't know if the real Doc Holliday ever actually rolled a coin across his knuckles while playing high-stakes poker, but it could have happened, right? Frankly, who cares?

Day and Night World Map +1 this page: Follow us on Google+: Like/share this page: Follow us on facebook: The map below shows the current position of the Sun and the Moon. It shows which parts of the Earth are in daylight and which are in night. Intellectually-honest and intellectually-dishonest debate tactics – John T. Reed Copyright by John T. Reed This Web site is, in part, a debate between me and others with whom I take various issues. I welcome intellectually-honest debate. It is one of my favorite ways to test my theories and learn. That is the way we were trained at Harvard Business School where all lessons are taught by the case method and my wife and I got our MBA's.

How to Make Holograms "Everything should be made as simple as possible, but not simpler” - Albert Einstein We attempt to follow this dictum so you can make holograms easily. The procedures we propose herein are as simple as it is physically possible. In the process, we make holography not only as simple as possible, but safer, less expensive, and more accessible to young people. Confidence tricks Techniques > Confidence tricks Articles | Examples | So what There is, according to legend, a sucker born every day, and of course there are many confidence tricksters around who are all too ready to relieve them of their wealth. Two main levers of confidence tricksters are gullibility and greed. They will exploit the incautious and naive and offer something for nothing as an appeal to our natural desires.

Card Throwing - The simple "trick" to do this right All you need to get started is a deck of cards and somewhere to throw them. I would suggest somewhere indoors where you won't knock stuff over and break it. Any cards will do, I used cheap crappy paper ones and expensive plastic coated ones and didn't notice a lot of difference. The main things to keep in mind are: Video and Podcasts: Events by Category Richard Candida Smith Intellectual History of the United States since 1865 - In this course we will be discussing key developments in U.S. thought since the middle of the nineteenth century, roughly beginning with the reception of Darwin. The broader story told in the class weaves together in the history of science and engineering, the arts and popular culture, philosophy, and education. read more Gail S.

How to Solve a Rubik's Cube (Easy Move Notation) First LayerMiddle LayerLast layerNotations Edited by NatK, Krystle, Mimi, BohemianWikipedian and 59 others The Rubik's Cube can be very frustrating and may seem next to impossible to restore to its original configuration. However, once you know a few algorithms, it is very easy to solve. The method described in this article is the layer method: we first solve one face of the cube (first layer), then the middle layer, and finally the last layer.

I.have. not . thought about putting up a picture yet. by athenaxwood Jul 31

Haven't thought about doing that yet. by athenaxwood Jul 30

no i dont read anything i am npt intrested in..... so why dobt you have a pic? savvybear200 to athenaxwood by savvybear200 Jul 30