15 Little Ways to Deepen Your Relationship With Anyone. 1. 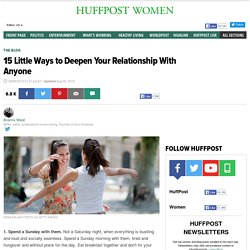 Spend a Sunday with them. Not a Saturday night, when everything is bustling and loud and socially seamless. Spend a Sunday morning with them, tired and hungover and without plans for the day. Eat breakfast together and don't fix your hair. Experience each other without needing to entertain. 2. 3. 4. 5. 6. 7. 8 Secret Ways We Influence Others With Our Body Language. A Way to Have Conversations That Will Lead to Deeper Relationships. When I was a mama of three very tiny, very messy, very beautiful rug rats, we had DAYS THAT WENT ON FOR LIFETIMES. 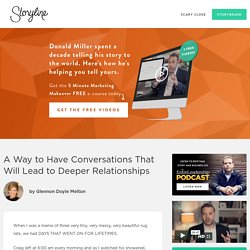 Become a Better Conversationalist With the "Rule of Three" What a difference a word can make. People spend a good deal of time talking to one another, and in general we do it pretty well. 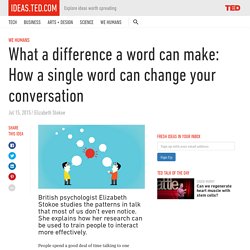 We might feel excited, angry, embarrassed, or — if we’re lucky — loved, in the course of our daily conversations. So is there any benefit to thinking about a science of talk? 9 Phrases Smart People Never Use In Conversation. We’ve all said things that people interpreted much differently than we thought they would. 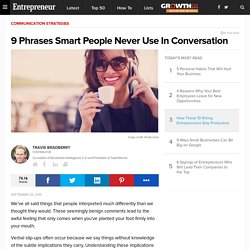 These seemingly benign comments lead to the awful feeling that only comes when you’ve planted your foot firmly into your mouth. Verbal slip-ups often occur because we say things without knowledge of the subtle implications they carry. Understanding these implications requires social awareness—the ability to pick up on the emotions and experiences of other people. TalentSmart has tested the emotional intelligence (EQ) of more than a million people and discovered that social awareness is a skill in which many of us are lacking. 5 Rules for Getting Along with Anyone, Anywhere. An Unusual Trick For Seeming Smart Anywhere, Anytime. 3 Things To Do For An Awesome First Impression (Says Science)  By Christine Schoenwald First impressions can be powerful and long-lasting, so you'd think they would take a lot of time and consideration when being formed. 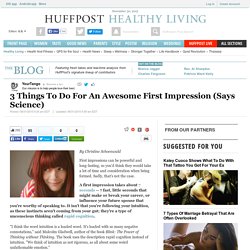 Sadly, that's not the case. A first impression takes about 7 seconds -- 7 fast, little seconds that might make or break your career, or influence your future spouse that you're worthy of speaking to. To Stop Procrastinating, Start by Understanding the Emotions Involved. The 7 Judgments People Make When They First Meet You  By Caithlin Pena Have you ever wondered what someone's first impression of you is? 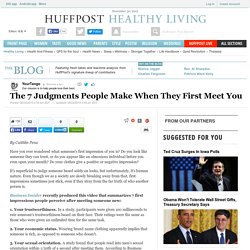 Do you look like someone they can trust, or do you appear like an obnoxious individual before you even open your mouth? Do your clothes give a positive or negative impression? It's superficial to judge someone based solely on looks, but unfortunately, it's human nature. Even though we as a society are slowly breaking away from that, first impressions sometimes just stick, even if they stray from the far truth of who another person is. People Who Possess This One Skill Are More Likable In Social Settings. Recently, I attended a wedding at the incredible W Hotel in Dallas, TX. 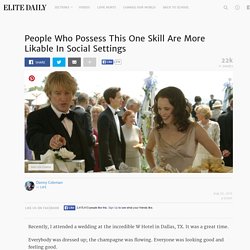 It was a great time. Everybody was dressed up; the champagne was flowing. Everyone was looking good and feeling good. Being Herd: The difference between persuasion and manipulation - Indianapolis Recorder Newspaper: Blogs. When we communicate, more often than not we are trying to convince someone to do something, make a decision or agree with our line of thinking. 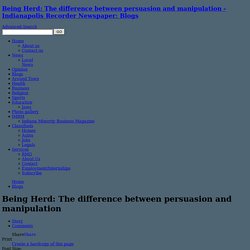 Understanding how people form opinions, arguments and present facts is critical in business. Do You Want People to Understand You? Stop Doing This. 4 Ways the Power of Suggestion Can Change Your Life. Want To Make A Good Impression? Try This Trick. In her new book No One Understands You And What to Do About It, social psychologist Heidi Grant Halvorson takes a closer look at why we're misunderstood. 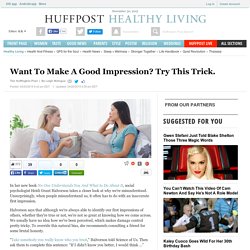 Unsurprisingly, when people misunderstand us, it often has to do with an inaccurate first impression. Halvorson says that although we're always able to identify our first impressions of others, whether they're true or not, we're not so great at knowing how we come across. We usually have no idea how we've been perceived, which makes damage control pretty tricky. Make a Great Impression. Curb Conversational Narcissism He's talking about his new Subaru, which reminds you of the battle you waged—and won—with that smarmy Hertz-rental-car dealer in Miami last month. 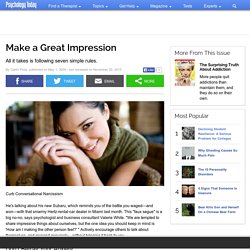 This "faux segue" is a big no-no, says psychologist and business consultant Valerie White. "We are tempted to share impressive things about ourselves, but the one idea you should keep in mind is 'How am I making the other person feel? ' " Actively encourage others to talk about themselves, and respond genuinely—without bringing it back to you. How to turn small talk into smart conversation. Imagine almost any situation where two or more people are gathered—a wedding reception, a job interview, two off-duty cops hanging out in a Jacuzzi.

What do these situations have in common? A shy person’s guide to making (and surviving) small talk. A few weeks into kindergarten, my teacher contacted my mother to express her concern over my behavior. “Mrs. Vendetti,” she began, “I don’t want to cause alarm but I think there’s something wrong with your daughter. She doesn’t talk to anyone. She just plays in the corner by herself. All the time.” 1) Plan conversation topics ahead of time. 7 Ways to Make Small Talk Work for You. 9 Ways to Increase Your Charisma. Why the Look on Your Face May Matter More Than What You Say. 3 Steps to Boosting Your Charisma. Make a Great Impression. Here's the science behind first impressions — and how to make up for a bad one. This is Dr. Heidi Grant Halvorson, and she's going to help us understand why first impressions are so important.

GIFs from Big Think. Dr. Grant Halvorson is a social psychologist and associate director of the Motivation Science Center at Columbia Business School. In a recent video for Big Think, she took a look at confirmation bias — what it is, how it works, and how to overcome it. Confirmation bias is the brain's tendency to seek out information that confirms our existing beliefs. This magical button delivers Upworthy stories to you on Facebook: Confirmation bias is something that affects us all.

But it's the primacy effect that explains why our brains really emphasize the first information we receive about a person or topic. The primacy effect is kind of like the overzealous sibling of confirmation bias. Do You Really Want to Know What People Think of You? What Does Your Face Really Tell the World About You? 10 Daily Habits Of Successful, Intelligent People  By Brenda Della Casa There are some who believe that successful people spend their weekends working overtime, but you'd be mistaken to equate success with a workaholic mindset.

The truth is that most of those who are successful use their weekends as a way to productively unwind and connect with themselves, their loved ones, and their goals. According to Laura Vanderkam, author of What the Most Successful People Do on the Weekend, successful people value the importance of productive relaxation, which allows them to recharge and reconnect with themselves and their goals. We're sharing 10 habits that will aid in your goal-getting. 1. While they may not get out of bed at their normal 5:30 a.m., they're also not crawling out from under-the-covers at noon. 2. 3. 13 Habits of Exceptionally Likable People. Too many people succumb to the mistaken belief that being likable comes from natural, unteachable traits that belong only to a lucky few—the good looking, the fiercely social, and the incredibly talented. It’s easy to fall prey to this misconception. In reality, being likable is under your control, and it’s a matter of emotional intelligence (EQ).

In a study conducted at UCLA, subjects rated over 500 adjectives based on their perceived significance to likeability. The top-rated adjectives had nothing to do with being gregarious, intelligent, or attractive (innate characteristics). Instead, the top adjectives were sincerity, transparency, and capacity for understanding (another person). These adjectives, and others like them, describe people who are skilled in the social side of emotional intelligence. Related: 9 Things Successful People Won't Do. Jedi Mind Tricks: 17 Lesser Known Ways to Persuade People. Formal_apology0-size-790x0.jpg (JPEG Image, 790x591 pixels) - Scaled (85%) Confidence tricks. Techniques > Confidence tricks Articles | Examples | So what. 35 Life Hacks! Free Perks, Snarky Tricks and More « Wonderment Blog. 9GAG's infographic teaches us all sorts of conveniences and short cuts to daily life, urawaza style.

Some aren't complete revelations (the first hanger trick below), but others are pretty cool (if they work!). HOW TO CHEAT AT EVERYTHING. Perfect Persuasive Messages. Craft messages that change minds using these 20 principles of persuasion, all based on established psychological research. Perfection is hard to achieve in any walk of life and persuasion is no different.