How to Manipulate People 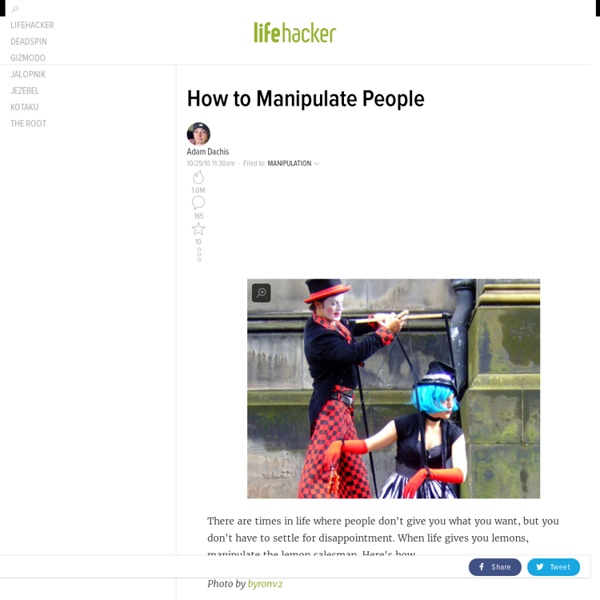 Emotion vs. Logic: "The easiest way to manipulate people—especially Americans—" Usually true and this makes me sad. But, its not always true. I find it helpful to apply the TV/Politics test. TV: Grey's Anatomy or House? Politics: Palin or Buckley? If they can't answer either of these questions, then just tell them what you want IS what they want in an authoritative manner and they'll probably do it.

Seven tricks your brain is playing on you (NaturalNews) We all want to believe we are tough to fool. The problem is, even if you are not so gullible, your brain still works a certain way, making associations that create vulnerability to being easily fooled, or fooling yourself. It takes work to release yourself from these natural assumptions that are presumed to originate from a mix of hard wiring and cultural conditioning. Getting beyond them is surely a worthwhile thing to do, however. Intellectually-honest and intellectually-dishonest debate tactics – John T. Reed Copyright by John T. Reed This Web site is, in part, a debate between me and others with whom I take various issues. I welcome intellectually-honest debate.

The Battle for Your Mind: Brainwashing Techniques Being Used On The Public By Dick Sutphen Authoritarian followers Mind Control Subliminals By Dick Sutphen Summary of Contents The Birth of Conversion The Three Brain Phases How Revivalist Preachers Work Voice Roll Technique Six Conversion Techniques 1. keeping agreements 2.physical and mental fatigue 3. increase the tension 4. Placebo Buttons The Misconception: All buttons placed around you do your bidding. The Truth: Many public buttons are only there to comfort you. You press the doorbell button, you hear the doorbell ring. You press the elevator button, it lights up. You press the button on the vending machine, a soft drink comes rattling down the chute.

Is All the Truth We Need in the Data? by Jag Bhalla Is all the truth we need found in the numbers? Can the stats always chart a better course? Although it seems savvy to defer to “the data,” the devil is in the details. 1. EAT BUGS: Monetary incentives distort our perceptions of what's good for us / Boing Boing There are lots of transactions that we're either prohibited from making (selling kidneys), or that are strictly regulated by statute (parental surrogacy). Naturally, these rules are hotly debated, especially among economists, who generally assume that markets of informed buyers and sellers produce outcomes that make everyone better off. In a Job Market paper, Stanford's Sandro Ambuehl describes a series of experiments that investigated the way in which incentives affect our ability to predict whether something is the best course of action for us. Specifically, Ambuehl set out to convince people to eat raw, whole insects, and compared how they rationalized their actions in the presence and absence of cash rewards. It may not surprise you to discover that people who've been promised a lot of money to do something are likely to ignore or discount evidence that they won't like that course of action. An Offer You Can’t Refuse?

Pandering to the lizard brain: American media versus objective reality / Boing Boing Matt Taibbi, in typical blazing form in the Rolling Stone, asks how it can be that millions of Americans believe Donald Trump's fairy-tale about Muslims cheering after 9/11 when it just didn't happen. There are many related questions, like how can so many people believe the (ahem) trumped-up stories about Planned Parenthood selling baby-parts, or the nonsense about how "92 percent of the jobs lost under Obama belonged to women." Taibbi says that investor-driven media, which no longer even plays lip-service to the idea of informing the public, is partly to blame -- but so is the public for demanding it. Though I will read Taibbi all day long, I don't entirely agree with his point here.

Jedi Mind Tricks: 17 Lesser Known Ways to Persuade People Want to know how to persuade people online and get what you want? The power of influence is usually all that separates the successful from everyone else. These are some tactics, discovered through psychological research, that you have probably not yet heard about, but have the potential to increase your persuasive abilities. I’m not going to cover reciprocity, scarcity or social proof and all those widely known persuasion principles.