How we change what others think, believe, feel and do 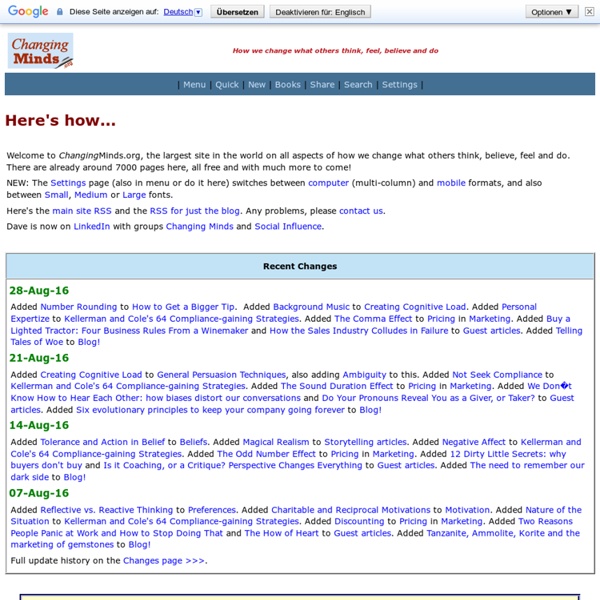 Scientists Discover Quadruple Helix: Four Strand DNA In Human Cells The human race knows very little of itself, almost like a race with amnesia. As we continue to move forward through time, new discoveries are made that make old theories obsolete and false. It’s a good lesson that shows us how we can attach ourselves to “truths” and believe them whole-heartedly, often forgetting that truth is constantly changing and new paradigms of perception always lurk around the corner. Decades after scientists described our “chemical code” of life using the double helix DNA, researchers have discovered four-stranded DNA within human cells. The structures are called G-quadruplexes, because they form in regions of DNA that are full of guanine, one of the DNA molecule’s four building blocks. The others are adenine, cytosine and thymine.

10 requirements of the perfect manager If you could hire your next boss, what selection criteria would you use? Alan Norton shares a make-believe want ad aimed at finding the ideal manager. Haven't you wished at least once that you could hire your next boss? You might win the lottery, buy the company, and do just that. But chances are if that happened, you would be out the door in less time than it took to pick the numbers. One of the wonderful things about being a writer is that I don't have to win the lottery for my daydreams to become reality. 100 I fatti molto cool sul corpo umano - TV Global One The Brain The human brain is the most complex and least understood part of the human anatomy. There may be a lot we don’t know, but here are a few interesting facts that we’ve got covered.

Critical Thinking Model 1 To Analyze Thinking We Must Identify and Question its Elemental Structures Standard: Clarityunderstandable, the meaning can be grasped Could you elaborate further? New Experiment Will Answer Some Mind-Bending Questions On Whether We Live In a Hologram The Department of Energy’s Fermi National Accelerator Laboratory is completing a unique experiment called the Holometer which has recently started collecting data to answer some mind-bending questions about our universe–including whether we live in a hologram. Much like characters on a television show would not know that their seemingly 3-D world exists only on a 2-D screen, we could be clueless that our 3-D space is just an illusion. The information about everything in our universe could actually be encoded in tiny packets in two dimensions.

How to Think When I applied for my faculty job at the MIT Media Lab, I had to write a teaching statement. One of the things I proposed was to teach a class called “How to Think,” which would focus on how to be creative, thoughtful, and powerful in a world where problems are extremely complex, targets are continuously moving, and our brains often seem like nodes of enormous networks that constantly reconfigure. In the process of thinking about this, I composed 10 rules, which I sometimes share with students. I’ve listed them here, followed by some practical advice on implementation. The Top 10 Psychology Studies of 2010 The end of 2010 fast approaches, and I'm thrilled to have been asked by the editors of Psychology Today to write about the Top 10 psychology studies of the year. I've focused on studies that I personally feel stand out, not only as examples of great science, but even more importantly, as examples of how the science of psychology can improve our lives. Each study has a clear "take home" message, offering the reader an insight or a simple strategy they can use to reach their goals , strengthen their relationships, make better decisions, or become happier.

Global Freedom Movement Illustration of how Liquid Democracy Works via Wikipedia Liquid democracy is a group-decision-making method that works as a sort of “direct democracy for people who know they’re not experts on a subject, but know of people that they trust who who know more about a subject than themselves”. Questions are settled by asking everyone… but many people’s answer will be “whatever X says”. Real Science Online We want you to know we use cookies to support features like login; without them, you're unlikely to be able to use our sites. By browsing our site with cookies enabled, you are agreeing to their use; read our newly updated privacy policy here to find out more. Sort by All Space Climate Humanities Nature Biology Physics

This Is How To Be Productive: 5 New Secrets Proven By Research Want to know how to be productive? Create goals, make a plan and execute. We all know this is a good idea… and it never, ever seems to work. It’s like simplifying boxing down to “Just go into the ring and punch the other guy until he’s knocked out.” Sounds easy. (Hint: it’s not that easy.)

Consensus Team Decision Making Strategic Leadership and Decision Making The Westerner and the Japanese man mean something different when they talk of "making a decision." In the West, all the emphasis is on the answer to the question. To the Japanese, however, the important element in decision making is defining the question. Art of War by SunTzu [SunZi] -English Hypertext Translated from the Chinese By LIONEL GILES, M.A. (1910) [This is the basic text of Sun Tzu on the Art of War. It was extracted from Mr. Giles' complete work as titled above. The commentary itself, which, of course includes this work embedded within it, has been released as suntzu10.txt (or suntzu10.zip). This is being released only as an adjunct to that work, which contains a wealth of commentary upon this text.]

OODA Loops - Decision-Making Skills Training from MindTools.com Understanding the Decision Cycle Observation is the first step. © iStockphoto/DivaNir4a Has it ever struck you just how many military terms have become everyday terms in business-speak? War and business are often compared and contrasted. As well as "fighting off threats" or "engaging in a price war", we talk about "gathering intelligence", "making a pre-emptive strike", and even trying to "out-maneuver" the competition.

25 Google Drive Tips You’ve Probably Never Heard Before Recently I moved over from Dropbox to Google Drive and found a few unexpected benefits. At first I had a little trouble managing the space since the 1TB on my Google Drive was bigger than my HDD, but after I got that sorted I started to learn some of the deeper features of Google Drive, some of which are pretty cool. Below is a list of the top tips and tricks I have learned from playing with Google Drive over the last few months. Work Well with Others Google drive got it’s early breaks in the market by being far superior at collaborating with others than any other tool out there. This still holds true today.