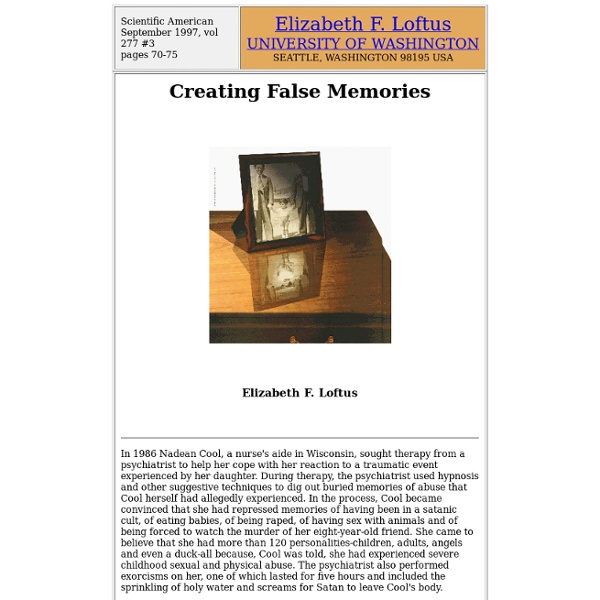 Elizabeth F. Loftus In 1986 Nadean Cool, a nurse's aide in Wisconsin, sought therapy from a psychiatrist to help her cope with her reaction to a traumatic event experienced by her daughter. During therapy, the psychiatrist used hypnosis and other suggestive techniques to dig out buried memories of abuse that Cool herself had allegedly experienced. In the process, Cool became convinced that she had repressed memories of having been in a satanic cult, of eating babies, of being raped, of having sex with animals and of being forced to watch the murder of her eight-year-old friend. She came to believe that she had more than 120 personalities-children, adults, angels and even a duck-all because, Cool was told, she had experienced severe childhood sexual and physical abuse. When Cool finally realized that false memories had been planted, she sued the psychiatrist for malpractice. False Childhood Memories My research associate, Jacqueline E. Imagination Inflation Impossible Memories The Author

How to Memorize - Learn to memorize and increase memory If you are visiting from StumbleUpon and like this article and tool, please consider giving it a thumbs up. Thanks! Memorizing does not have to be as hard as most people make it. The problem is that most people only know how to memorize by reading the same thing over and over again. Scientists capture the first image of memories being made The ability to learn and to establish new memories is essential to our daily existence and identity; enabling us to navigate through the world. A new study by researchers at the Montreal Neurological Institute and Hospital (The Neuro), McGill University and University of California, Los Angeles has captured an image for the first time of a mechanism, specifically protein translation, which underlies long-term memory formation. The finding provides the first visual evidence that when a new memory is formed new proteins are made locally at the synapse - the connection between nerve cells - increasing the strength of the synaptic connection and reinforcing the memory. The study published in Science, is important for understanding how memory traces are created and the ability to monitor it in real time will allow a detailed understanding of how memories are formed.

Intellectually-honest and intellectually-dishonest debate tactics – John T. Reed Copyright by John T. Reed This Web site is, in part, a debate between me and others with whom I take various issues. The lesson you never got taught in school: How to learn! A paper published in Psychological Science in the Public Interest evaluated ten techniques for improving learning, ranging from mnemonics to highlighting and came to some surprising conclusions. The report is quite a heavy document so I’ve summarised the techniques below based on the conclusions of the report regarding effectiveness of each technique. Be aware that everyone thinks they have their own style of learning (they don't, according to the latest research), and the evidence suggests that just because a technique works or does not work for other people does not necessarily mean it will or won’t work well for you. If you want to know how to revise or learn most effectively you will still want to experiment on yourself a little with each technique before writing any of them off. Elaborative Interrogation (Rating = moderate) A method involving creating explanations for why stated facts are true.

The biology of dreaming o one would normally consider David Maurice, Ph.D., professor of ocular physiology in the Department of Ophthalmology at Columbia-Presbyterian Medical Center, a revolutionary. Nevertheless, he has reignited a decades-long controversy that could spark a revolutionary re-evaluation of an entire field of behavioral research. Dr. Maurice has developed a startling new line of scientific inquiry that, when added to other findings, could change our understanding of rapid eye movement (REM) sleep and the nature of dreams.

5 Brain Hacks That Give You Mind-Blowing Powers #2. Control Anger by Using Your Less-Dominant Hand Hemera Technologies/AbleStock.com Everyone knows at least one guy who hulks out over the stupidest things -- a messed up coffee order, a red light, global warming. Usually these people are just harmless joke fodder until they road rage on an elderly person over a politically charged bumper sticker. The 5 Weirdest Sixth Senses Humans Have (Without Knowing It) Every attempt to prove that humans have some kind of telepathic sixth sense shows it to be complete bullshit. But we still shouldn't sell ourselves short -- we have all sorts of "extra" senses that we either never use or don't notice when we do. And some of them come pretty damned close to mind reading. For instance ... #5.

Incremental reading Introduction Traditional linear reading is highly inefficient. This comes from the fact that various pieces of the text are of various importance. The Science of Word Recognition About fonts > ClearType The Science of Word Recognition or how I learned to stop worrying and love the bouma Kevin LarsonAdvanced Reading Technology, Microsoft CorporationJuly 2004 Introduction Is All the Truth We Need in the Data? by Jag Bhalla Is all the truth we need found in the numbers? Can the stats always chart a better course? Although it seems savvy to defer to “the data,” the devil is in the details.

How to Become a Human Calendar Mentally finding out the day of the week for any date is a skill you can easily learn. You don’t need to be an autistic genius – all it takes is basic memorization effort and some trivial math. When I first learned this technique many years ago, I did it just for fun. With time, I learned to enjoy the convenience of not needing a calendar anymore. It’s far more useful than I first thought, and with just a little practice, you’ll be able to find out the days of the week much faster than when reaching for a calendar. The Method

The Unexpected Reason Facebook May Be Good For Older Adults Spending time on Facebook has been shown to reduce stress levels, slow down heart rates and -- generally speaking -- just simply relax people. Now new research suggests that learning to use Facebook may have an additional benefit for adults over 65: a sharpening of mental abilities. Janelle Wohltmann, a graduate student in the University of Arizona department of psychology, set out to see whether teaching older adults to use the popular social networking site could give a boost to their cognitive performance and make them feel more socially connected. Her preliminary findings, which she shared this month at the International Neuropsychological Society Annual Meeting in Hawaii, reveal that older adults, after learning to use Facebook, performed about 25 percent better on memory tasks. During her study, Wohltmann helped train 14 older adults who had never before -- or who had rarely used -- Facebook so that they ultimately amassed new online friends while posting daily on the site.

EAT BUGS: Monetary incentives distort our perceptions of what's good for us / Boing Boing There are lots of transactions that we're either prohibited from making (selling kidneys), or that are strictly regulated by statute (parental surrogacy). Naturally, these rules are hotly debated, especially among economists, who generally assume that markets of informed buyers and sellers produce outcomes that make everyone better off. In a Job Market paper, Stanford's Sandro Ambuehl describes a series of experiments that investigated the way in which incentives affect our ability to predict whether something is the best course of action for us. Specifically, Ambuehl set out to convince people to eat raw, whole insects, and compared how they rationalized their actions in the presence and absence of cash rewards. It may not surprise you to discover that people who've been promised a lot of money to do something are likely to ignore or discount evidence that they won't like that course of action.