How to turn small talk into smart conversation 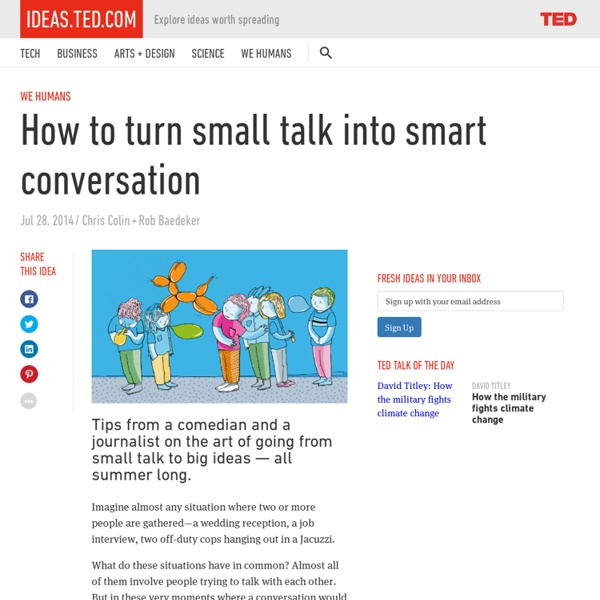 Imagine almost any situation where two or more people are gathered—a wedding reception, a job interview, two off-duty cops hanging out in a Jacuzzi. What do these situations have in common? Almost all of them involve people trying to talk with each other. But in these very moments where a conversation would enhance an encounter, we often fall short. We can’t think of a thing to say. Or worse, we do a passable job at talking. We stagger through our romantic, professional and social worlds with the goal merely of not crashing, never considering that we might soar. We at What to Talk About headquarters set out to change this. Ask for stories, not answers One way to get beyond small talk is to ask open-ended questions. Instead of . . . Try . . . Break the mirror When small talk stalls out, it’s often due to a phenomenon we call “mirroring.” Mirrored example: James: It’s a beautiful day! See? Non-mirrored example: James: It’s a beautiful day! See? Leapfrog over the expected response

25+ apps that the TED staff swears make their everyday lives easier At our small, fast-moving nonprofit company, everyone does a couple of jobs — and productivity apps help us manage roles that shift between coding, writing/designing and running a full-scale conference twice a year. We asked the TED staff what apps they can’t live without. And beyond the classics—Instagram, Google Maps, Spotify, Uber, Seamless—we found some great apps that might help you too. (A star denotes that the app is free, or at least has a free version.) For random life stuff…

Why You Hate Work - The New York Times Purpose: Employees who derive meaning and significance from their work were more than three times as likely to stay with their organizations — the highest single impact of any variable in our survey. These employees also reported 1.7 times higher job satisfaction and they were 1.4 times more engaged at work. We often ask senior leaders a simple question: If your employees feel more energized, valued, focused and purposeful, do they perform better? Not surprisingly, the answer is almost always “Yes.” Next we ask, “So how much do you invest in meeting those needs?”

20 Best Inspirational Speeches from the Movies When inspiration does not come, I go for a walk, go to the movies, talk to a friend, let go… The muse is bound to return again, especially if I turn my back! ~Judy Collins People watch movies for a lot of different reasons. Some watch for escapism—to leave their everyday lives and experience the exotic, exciting lands that are in the movies they watch. Some watch movies to be thrilled or even scared, They watch action movies and horror movies to get the blood pumping. I watch movies for another reason—to be inspired. Why I Gave Up a $95,000 Job to Move to an Island and Scoop Ice Cream There is a chicken in my shower. It's 8:30 a.m., I've just sat down on the toilet to pee. I casually glance around and there it is, drinking some of the residual water puddled on my shower floor. This is not the first creature to make an appearance in my bathroom. Since I moved to the Caribbean, I've had spirited encounters with tarantulas, scorpions, and untold lizards. But the chicken got me thinking.

Charming talks for a boost on a bad day Now playing All under the age of 16, brothers Jonny, Robbie and Tommy Mizzone are from New Jersey, a US state that's better known for the rock of Bruce Springsteen than the bluegrass of Earl Scruggs. Nonetheless, the siblings began performing bluegrass covers, as well as their own compositions, at a young age. Here, they play three dazzling songs in three different keys, passing the lead back and forth from fiddle to banjo to guitar. Think You're Too Old to Be An Entrepreneur? Think Again. (Infographic) If Hollywood wants to portray an entrepreneur in a movie, then he -- and it’s usually a he – is in his early 20s, may or may not have a college degree, is probably wearing blue jeans and a hoodie, and is a bit unkempt, with messy hair and facial hair. That stereotype may appeal to our interest in a narrative where geeks take over the world, but the Mark Zuckerberg-inspired vision is absolutely only a part of the entrepreneurship story. Many entrepreneurs don’t even think about launching their own business until they are in their 30s, 40s, and even 50s, after years of work experience. Related: Failure Is Part of the Game. Getting Back Up Is the Magic Sauce.

The best stats you've ever seen - Hans Rosling Rosling is a passionate advocate for “liberating” publicly-funded data on the Internet. Select one topic area for which country-specific data might be compared (e.g., education, health, food production, the environment, etc.), and identify what you think are the best sources of data in this area on the Internet. Create a guide that lists these sources, and provides a brief review of each. Entrepreneurs: Your Irrational Optimism Is Necessary Research confirms what feels intuitive; entrepreneurs are an optimistic group, afflicted with the 'optimism bias,' a tendency to view the glass as half full backed by the belief that negative events are what happens to other people. This is particularly true, one study found, of serial entrepreneurs, those bootstrapping men and women who we celebrate for persevering in the face of multiple failures. The more times you step up to bat, of course, the greater the likelihood that you'll hit a home run. But most of us aren't wired that way.

Sound Types FindSounds Search the Web for Sounds What types of sounds can be found on the Web using FindSounds? Below is a partial list.