HOW TO TICK PEOPLE OFF 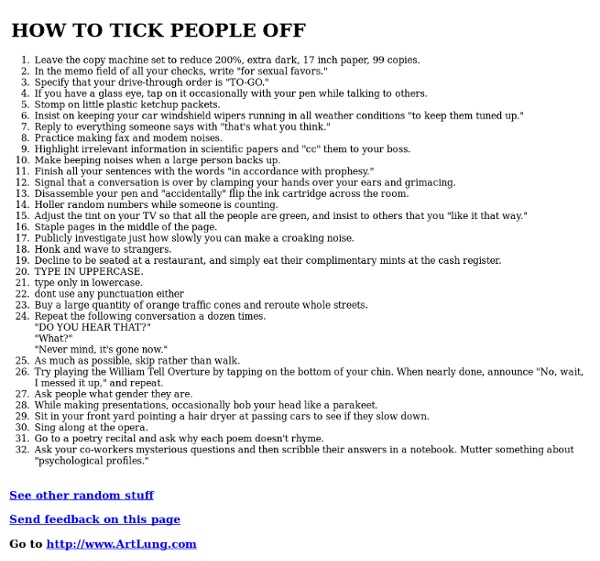 Things People Said: Courtroom Quotations The following quotations are taken from official court records across the nation, showing how funny and embarrassing it is that recorders operate at all times in courts of law, so that even the slightest inadvertence is preserved for posterity. Lawyer: "Was that the same nose you broke as a child?"Witness: "I only have one, you know." Lawyer: "Now, Mrs. why americans should never be allowed to travel I had someone ask for an aisle seats so that his or her hair wouldn't get messed up by being near the window. A client called in inquiring about a package to Hawaii. After going over all the cost info, she asked, "Would it be cheaper to fly to California and then take the train to Hawaii?" I got a call from a woman who wanted to go to Capetown. I started to explain the length of the flight and the passport information when she interrupted me with "I'm not trying to make you look stupid, but Capetown is in Massachusetts.

Intellectually-honest and intellectually-dishonest debate tactics – John T. Reed Copyright by John T. Reed This Web site is, in part, a debate between me and others with whom I take various issues. I welcome intellectually-honest debate. Nerd Fitness: Helping You Lose Weight, Get Stronger, Live Better. I received an email a few months back from a NF reader that made me smile: “I am going back to square one. I noticed the only habit that I changed and stuck with was drinking tons of water. Have you ever started playing a game and get a few hours in and go “man I wish I knew these controls/tips from the beginning”? So you restart and the game just feels easier from that point on.

funny-animated-gifs from thinknice.com Animated GIFs are graphic files that are composed of multiple different images on top of each other. Together these images are compressed and work together (creating movement) to give the appearance of a mini movie. GIF stands for Graphics Interchange Format. best of craigslist: Why Geeks and Nerds Are Worth It... In the wide world of dating, there are many options. Do you go for the flashy guy with the smooth smile, or the dude in the corner typing away on his laptop? The following are reasons why I think my fellow females should pay more attention to the quiet geeks and nerds, and less attention to the flashy boys. 1.)

Amazing. Definately a need to memorize. by andrewmassengale Jul 22