23 Tools To Brainwash and Influence People Through Media 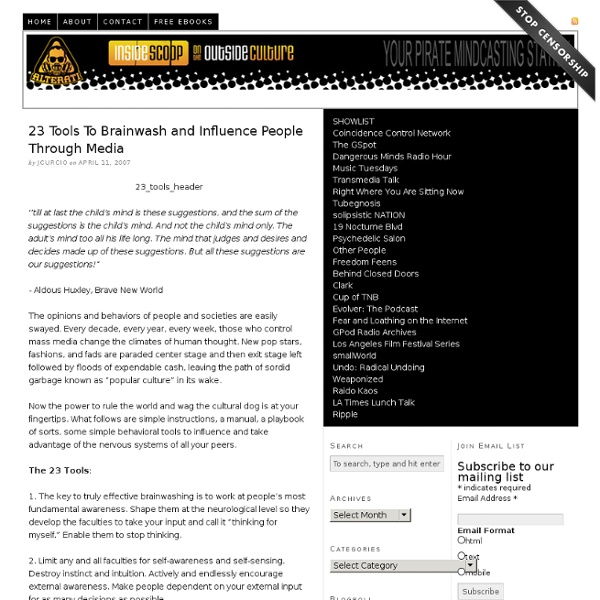 ‘’till at last the child’s mind is these suggestions, and the sum of the suggestions is the child’s mind. And not the child’s mind only. The adult’s mind too all his life long. The mind that judges and desires and decides made up of these suggestions. But all these suggestions are our suggestions!“ - Aldous Huxley, Brave New World The opinions and behaviors of people and societies are easily swayed. Now the power to rule the world and wag the cultural dog is at your fingertips. The 23 Tools: 1. 2. 3. 4. 5. 6. 7. 8. 9. 10. 11. 12. 13. 14. 15. 16. 17. 18. 19. 20. 21. 22. 23. By sticking to these simple premises you should be able to produce entire societies capable of ending world hunger, but too selfish to care. Devon White specializes in PR for the brain, promoting integrity, responsibility and conscious evolution through online video and lecture-performances on sex. Like this: Like Loading... Related:  Manipulation and Persuasion

Ben Franklin effect The Ben Franklin effect is a psychological finding: A person who has done someone a favor is more likely to do that person another favor than they would be if they had received a favor from that person. Similarly, one who harms another is more willing to harm them again than the victim is to retaliate.[1] Recognition of effect by Franklin[edit] In the words of Benjamin Franklin, who famously observed the effect and for whom it is named, "He that has once done you a kindness will be more ready to do you another, than he whom you yourself have obliged In his autobiography, Franklin explains how he dealt with the animosity of a rival legislator when he served in the Pennsylvania legislature in the 18th century: Having heard that he had in his library a certain very scarce and curious book, I wrote a note to him, expressing my desire of perusing that book, and requesting he would do me the favour of lending it to me for a few days. Effect as an example of cognitive dissonance[edit] Notes[edit]

Three Techniques for Quieting Your Mind Three Techniques for Quieting Your Mind Courtesy of Andrea A mere week ago, I was telling a client that I thought it was impossible to completely stop ourselves from thinking. Here are three of my newly discovered techniques for creating a quiet, peaceful, empty mind: 1. This technique came up in one of my coaching sessions. Our breathing cycle and the flow of our thoughts are closely linked. As we focus on those tiny pauses between our in- and out-breaths, we find that our mind quiets down at those points in our breathing. Without holding or interrupting your breath, begin extending those brief silences in your thoughts. 2. Imagine that you are holding a bunch of balloons in your hand. Instead of looking after them or watching them float away, focus on the empty space that is now in your hand. 3. Has your mind ever insisted on a particular stream of thought on and on, keeping you from sleep? If unwanted thoughts keep turning up in your mind, take a different approach! Blessings, Andrea

Welcome- The Incunabula Papers: Ong’s Hat 19. Quest to Learn : Imagination: Creating the Future of Education & Work 19. Quest to Learn Video: Katie Salen discusses Quest 2 Learn in a six part series on Big Think. Katie Salen recognizes that play is a profound part of the human experience. Salen is a game designer, interactive designer, animator, and design educator. On April 6, 2010, the Village Voice reported on Quest to Learn in “Game Theory: A city school explores the educational power of playing and designing games.” In the class “Sports for the Mind,” students build their own video games using a program called Gamestar Mechanic that was designed by Salen. “Sports for the Mind” teacher Al Doyle says his class helps students learn “systems thinking,” to understand the relationship of parts to wholes. Critic Diane Ravitch, an education historian and NYU professor, was cited in the article. “What [students] need most,” she said, “is to know history, civics, foreign languages, economics, literature, and to engage in the arts.

Cialdini's Six Principles of Influence - Communication Skills Training from MindTools Convincing Others to Say "Yes" (Also known as the Six Weapons of Influence) How do you influence others? © iStockphoto/blackred You've come up with a fantastic idea for a new product. Now you need to convince everyone to support it. However, you haven't had much success with this in the past. Influencing others is challenging, which is why it's worth understanding the psychological principles behind the influencing process. This is where it's useful to know about Cialdini's Six Principles of Influence. In this article, we'll examine these principles, and we'll look at how you can apply them to influence others. About the Six Principles The Six Principles of Influence (also known as the Six Weapons of Influence) were created by Robert Cialdini, Regents' Professor Emeritus of Psychology and Marketing at Arizona State University. The six principles are as follows: 1. As humans, we generally aim to return favors, pay back debts, and treat others as they treat us. 2. 3. 4. 5. 6. Warning: Reciprocity