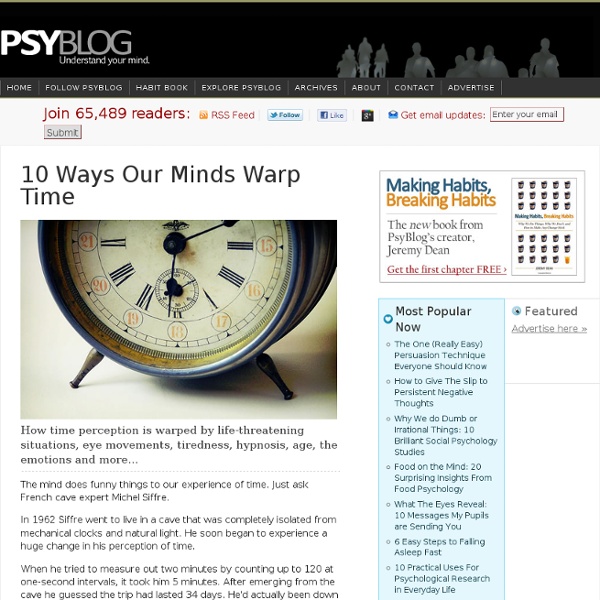 How time perception is warped by life-threatening situations, eye movements, tiredness, hypnosis, age, the emotions and more… The mind does funny things to our experience of time. Just ask French cave expert Michel Siffre. In 1962 Siffre went to live in a cave that was completely isolated from mechanical clocks and natural light. He soon began to experience a huge change in his perception of time. When he tried to measure out two minutes by counting up to 120 at one-second intervals, it took him 5 minutes. But you don’t have to hide out in a cave for a couple of months to warp time, it happens to us all the time. 1. People often report that time seems to slow down in life-threatening situations, like skydiving. But are we really processing more information in these seconds when time seems to stretch? To test this, Stetson et al. (2007) had people staring at a special chronometer while free-falling 50 metres into a net. 2. 3. 4. 5. 6. 7. 8. 9. 10. Time is relative “Time is an illusion.

The Cognitive Science of Rationality (The post is written for beginners. Send the link to your friends! Regular Less Wrong readers may want to jump to the Stanovich material .) The last 40 years of cognitive science have taught us a great deal about how our brains produce errors in thinking and decision making, and about how we can overcome those errors. Top Psychology Studies The end of 2010 fast approaches, and I'm thrilled to have been asked by the editors of Psychology Today to write about the Top 10 psychology studies of the year. I've focused on studies that I personally feel stand out, not only as examples of great science, but even more importantly, as examples of how the science of psychology can improve our lives. Each study has a clear "take home" message, offering the reader an insight or a simple strategy they can use to reach their goals , strengthen their relationships, make better decisions, or become happier.

Creating False Memories Elizabeth F. Loftus In 1986 Nadean Cool, a nurse's aide in Wisconsin, sought therapy from a psychiatrist to help her cope with her reaction to a traumatic event experienced by her daughter. During therapy, the psychiatrist used hypnosis and other suggestive techniques to dig out buried memories of abuse that Cool herself had allegedly experienced. In the process, Cool became convinced that she had repressed memories of having been in a satanic cult, of eating babies, of being raped, of having sex with animals and of being forced to watch the murder of her eight-year-old friend. 60 Ways to Become The Person You Love photo credit: Niffty.. Only the time and attention we give ourselves demonstrates how much we love and admire ourselves. Self love requires that we place ourselves at the top of our priority list. Self-nurturing is everything that makes us feel positive, happy and joyful. When we decide to honor ourselves with the love we need and deserve like the sun we radiate a glow, touching everything and everyone in our lives. Below are 60 ideas for glowing:

Fixed Mindset vs. Growth Mindset: Which One Are You? Here is an excerpt from an article about Carol Dweck, a professor of psychology at Stanford University: Through more than three decades of systematic research, [Carol Dweck] has been figuring out answers to why some people achieve their potential while equally talented others don’t—why some become Muhammad Ali and others Mike Tyson. The key, she found, isn’t ability; it’s whether you look at ability as something inherent that needs to be demonstrated or as something that can be developed. To anyone who is into personal growth and self-improvement, this seems obvious. But clearly, it is not obvious to everybody: look at this diagram by Nigel Holmes representing the two types of mindsets and I’ll sure you’ll recognize the attitudes of many people you know. Fixed Mindset

Why Does Beauty Exist? Over at the always excellent Not Exactly Rocket Science, Ed Yong summarizes a new investigation into the neural substrate of beauty: Tomohiro Ishizu and Semir Zeki from University College London watched the brains of 21 volunteers as they looked at 30 paintings and listened to 30 musical excerpts. All the while, they were lying inside an fMRI scanner, a machine that measures blood flow to different parts of the brain and shows which are most active. Bananas and Monkeys Original source unknown. (But the story appears to have some basis in fact.) Start with a cage containing five monkeys. Inside the cage, hang a banana on a string and place a set of stairs under it. Rosenhan experiment Rosenhan's study was done in two parts. The first part involved the use of healthy associates or "pseudopatients" (three women and five men, including Rosenhan himself) who briefly feigned auditory hallucinations in an attempt to gain admission to 12 different psychiatric hospitals in five different states in various locations in the United States. All were admitted and diagnosed with psychiatric disorders. After admission, the pseudopatients acted normally and told staff that they felt fine and had no longer experienced any additional hallucinations. All were forced to admit to having a mental illness and agree to take antipsychotic drugs as a condition of their release. The average time that the patients spent in the hospital was 19 days.

Best Quotes of All Time It’s been three years since we shared our original list of some of the best quotes of all time, and we felt it was a good time for an update. We’ve added another 25 quotes for you. But these aren’t just any quotes. Artist Manipulates Water With The Power Of Her Mind "Man is something that shall be overcome. What have you done to overcome him?” asked existentialist philosopher Friedrich Nietzsche. NY-based artist Lisa Park took this prompt as an invitation to extend the potential of man beyond our bodily limitations in the performative art project Eunoia, which means “beautiful thought” in Greek. Exploring questions of vulnerability, self-control, and liberation, Park recreates a scene that looks as if it's been lifted from your favorite Kung-Fu movie or an outtake from Kill Bill. Wearing a futuristic headset embeded with electroencephalography (EEG) sensors, Park moniters her own brain activity during meditation and transposes this energy onto dishes of water to reveal zen-like vibrations.

Time on the Brain: How You Are Always Living In the Past, and Other Quirks of Perception I always knew we humans have a rather tenuous grip on the concept of time, but I never realized quite how tenuous it was until a couple of weeks ago, when I attended a conference on the nature of time organized by the Foundational Questions Institute. This meeting, even more than FQXi’s previous efforts, was a mashup of different disciplines: fundamental physics, philosophy, neuroscience, complexity theory. Crossing academic disciplines may be overrated, as physicist-blogger Sabine Hossenfelder has pointed out, but it sure is fun.