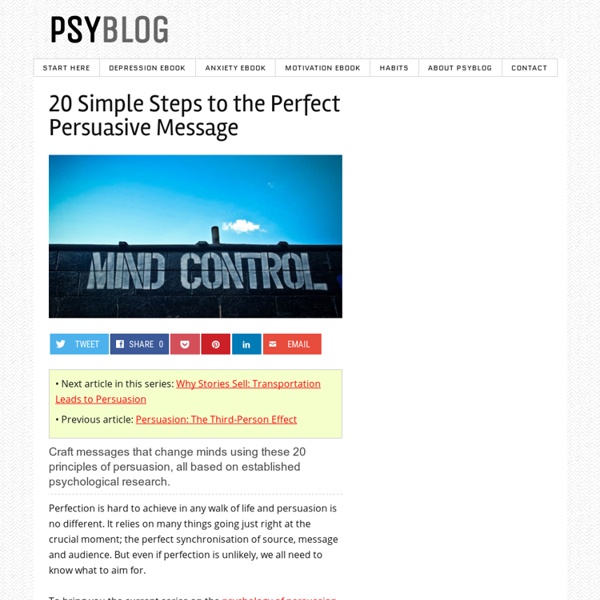 Craft messages that change minds using these 20 principles of persuasion, all based on established psychological research. Perfection is hard to achieve in any walk of life and persuasion is no different. It relies on many things going just right at the crucial moment; the perfect synchronisation of source, message and audience. But even if perfection is unlikely, we all need to know what to aim for. To bring you the current series on the psychology of persuasion I’ve been reading lots of research, much more than is covered in recent posts. As I read, I noticed the same themes cropping up over and over again. Here are the most important points for crafting the perfect persuasive message, all of which have scientific evidence to back them up. Change minds You should be aware that many of these factors interact with each other. Argument strength is also critical. Image credit: Maigh

How to Criticize with Kindness: Philosopher Daniel Dennett on the Four Steps to Arguing Intelligently By Maria Popova “In disputes upon moral or scientific points,” Arthur Martine counseled in his magnificent 1866 guide to the art of conversation, “let your aim be to come at truth, not to conquer your opponent. So you never shall be at a loss in losing the argument, and gaining a new discovery.” Of course, this isn’t what happens most of the time when we argue, both online and off, but especially when we deploy the artillery of our righteousness from behind the comfortable shield of the keyboard.

Confidence tricks Techniques > Confidence tricks Articles | Examples | So what There is, according to legend, a sucker born every day, and of course there are many confidence tricksters around who are all too ready to relieve them of their wealth. The 6 Elements of Persuasion (Infographic) Join us live at Entrepreneur's Accelerate Your Business event series in Chicago or Denver. Secure your spot » The word "influencer" gets thrown around a lot in business, but how does the power of the persuasion really work? Intellectually-honest and intellectually-dishonest debate tactics – John T. Reed Copyright by John T. Reed This Web site is, in part, a debate between me and others with whom I take various issues. I welcome intellectually-honest debate. It is one of my favorite ways to test my theories and learn. That is the way we were trained at Harvard Business School where all lessons are taught by the case method and my wife and I got our MBA's.

HOW TO CHEAT AT EVERYTHING Over lunch with Simon Lovell, a fascinating former card shark, Allison Schrager learns all sorts of things about how swindlers operate ... Special to MORE INTELLIGENT LIFE "I can spot someone's weakness a mile away. The Ten Golden Rules of Argument ​​“You don’t have to attend every argument you’re invited to.” — Anonymous Arguments are tricky. We spend a lot of our time trying to persuade others. We think that if we show them the facts that we have they will, logically, reach the same conclusions we did. Unfortunately that’s not how it works. When is the last time someone changed your mind this way?

38 Ways To Win An Argument—Arthur Schopenhauer - The India Uncut Blog - India Uncut For all of you who have ever been involved in an online debate in any way, Arthur Schopenhauer’s “38 Ways To Win An Argument” is indispensable. Most of these techniques will seem familiar to you, right from questioning the motive of a person making the argument instead of the argument itself (No. 35), exaggerating the propositions stated by the other person (No. 1) , misrepresenting the other person’s words (No. 2) and attacking a straw man instead (No. 3). It’s a full handbook of intellectual dishonesty there. Indeed, I generally avoid online debates because they inevitably degenerate to No. 38. The full text is below the fold. Many thanks to my friend Nitin Pai for reintroducing me to it.

The Science of Persuasion: How To Get People to Agree with What You Say 7.1K Flares Filament.io 7.1K Flares × “A large state does not behave at all like a gigantic municipality” – Nassim Nicholas Taleb What does this statement make you think? Disagree at all? When I first read that line, I thought “Oh really? Here are some reasons why a large state could in fact behave like a gigantic municipality...” Poor Man's Polygraph Part 1 Poor Man's Polygraph - Part 1 The Well... Technique Imagine you think your spouse is having an affair. The 6 Scientific Principles Behind Influence and Persuasion At the core of much of our marketing activity is one simple desire: to influence and persuade our audience. How does it actually work, though? Are we just throwing things out into the universe and hoping that someone, somewhere will find our content influential and persuasive?

Is All the Truth We Need in the Data? by Jag Bhalla Is all the truth we need found in the numbers? Can the stats always chart a better course? 25 Acts of Body Language to Avoid Our body language exhibits far more information about how we feel than it is possible to articulate verbally. All of the physical gestures we make are subconsciously interpreted by others. This can work for or against us depending on the kind of body language we use. Some gestures project a very positive message, while others do nothing but set a negative tone.