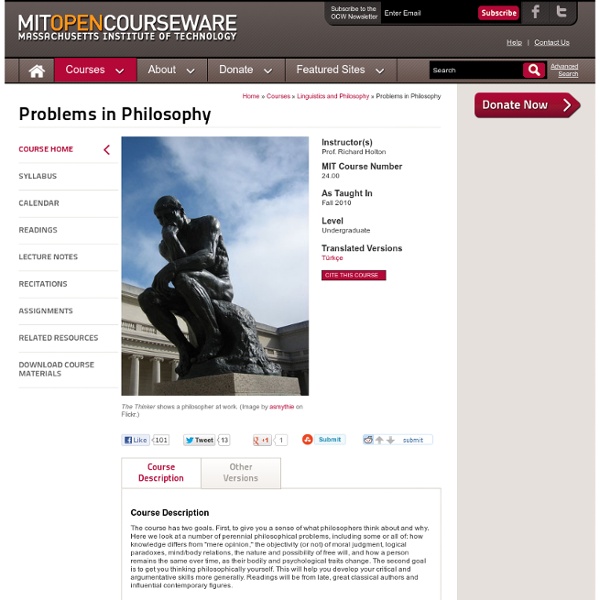 Course Description The course has two goals. First, to give you a sense of what philosophers think about and why. Here we look at a number of perennial philosophical problems, including some or all of: how knowledge differs from "mere opinion," the objectivity (or not) of moral judgment, logical paradoxes, mind/body relations, the nature and possibility of free will, and how a person remains the same over time, as their bodily and psychological traits change. The second goal is to get you thinking philosophically yourself. This will help you develop your critical and argumentative skills more generally.

clean sweep assessment Are you ready to clean up your life? The Clean Sweep Program is a checklist of 100 items which, when completed, give one complete personal freedom. These 100 items are grouped in 4 areas of life with 25 in each group: Physical Environment, Well-being, Money and Relationships. Warchalking Warchalking symbols Warchalking is the drawing of symbols in public places to advertise an open Wi-Fi network. Inspired by hobo symbols, the warchalking marks were conceived by a group of friends in June 2002 and publicised by Matt Jones who designed the set of icons and produced a downloadable document containing them.[1][2] Within days of Jones publishing a blog entry about warchalking, articles appeared in dozens of publications and stories appeared on several major television news programs around the world. Having found a Wi-Fi node, the warchalker draws a special symbol on a nearby object, such as a wall, the pavement, or a lamp post. Those offering Wi-Fi service might also draw such a symbol to advertise the availability of their Wi-Fi location, whether commercial or personal. See also[edit]

How Vinyl Records Are Made–And How to Pirate A Vinyl Record Vinyl records have a unique place in the world of music media. Aside from their warm analog tone, vinyl is the only popular medium that is nearly impossible to create or duplicate at home – something that can’t be claimed by cassettes, CDs, DVDs, and certainly not mp3s. Not to be an apologist for piracy, this inherently creates more value for recorded music than using an easily reproducible medium (be it physically or digitally) does. But as we all know, digital is the present and the future, and I am not complaining about that at all; one look at my iTunes playlist and you’ll know what I mean. A while back, the site qj.net ran a piece on how to “pirate” a vinyl record using normal silicone casting materials. Sadly, the link is broken, but thanks to the Wayback Machine, I’ve pulled the archived copy up and am attaching it here for posterity:

Humans vs. Zombies The game was created in the fall of 2005 at Goucher College by Chris Weed and Brad Sappington, who have since created an official website with general guideline rules and information for other universities to create and customize their own HvZ game. Final rules are determined by each game's moderators and admins. Since the game's creation, Humans vs. Zombies has been played at over 1,000 locations, spanning across six continents. Humans vs. Zombies has grown in popularity across campuses. [APP]SuperOneClick v1.7 (Root, Unroot, Enable Non-Market App) SuperOneClick Downloads available at v2.3.3 ------ Motorola ADB Patching Checks for shell root before applying exploits Unroot has been fixed to work more reliably LG devices no longer need to use alternate ADB v2.3.2 ------ Better LG phone support v2.3.1 ------ Auto driver installation v2.2 is up!

Han shot first The 1997 "Special Edition" of Star Wars depicts Greedo firing a shot at Han Solo shortly before Han responds in kind. In the original 1977 release, Han is the only one to fire. Scene[edit] Greedo is an associate of Jabba the Hutt, a Tatooine based crime lord for whom Han Solo also used to work. Before the events of the film, Jabba has put a bounty on Han, who had been transporting cargo for the crime lord, but was forced to dump it in order to avoid capture by an Imperial search party. The scene depicts Greedo pulling his blaster on Han as he attempts to leave the Mos Eisley cantina and cornering him to sit down in a booth. Install & Boot OS X Leopard from a USB Flash Drive By Dan Hinckley Update: You can now find instructions on how to install OS X Snow Leopard from a USB Drive at Maciverse. If you’re one of those people that continually adjust system settings, make changes in terminal, and try new and experimental software then you’ve probably done something in the past to your OS X installation that has compromised performance or made things stop working completely. On the other hand, you may have installed the latest updates to OS X and various programs just stopped working. If either of these sound like you, you may find it handy to have a back up OS X 10.5 Leopard install that you can boot to and make adjustments to your system. Installing OS X Leopard on a USB Flash Drive is much easier than expected.

Chekhov's gun Chekhov's gun is a dramatic principle requiring that every element in a narrative be necessary and irreplaceable, and that everything else be removed.[1][2][3] Remove everything that has no relevance to the story. If you say in the first chapter that there is a rifle hanging on the wall, in the second or third chapter it absolutely must go off. If it's not going to be fired, it shouldn't be hanging there. Variations on the statement include: rebel:art » Blog Archive » Ariel Schlesinger & Aram Bartholl: “Looptaggr”, 2010 Der unermüdliche Aram Bartholl hat nach “Dead Drops” schon wieder ein geniales Projekt realisiert – diesmal zusammen mit Ariel Schlesinger: “Looptaggr” – “Expressing your opinion in public just became 10 times easier. Looptaggr drive-by stenciling technology is infinite fun. Create your own Looptaggr today! Spin it!”. Via: Mail, danke Aram!

Cryptomnesia Cryptomnesia occurs when a forgotten memory returns without it being recognized as such by the subject, who believes it is something new and original. It is a memory bias whereby a person may falsely recall generating a thought, an idea, a song, or a joke,[1] not deliberately engaging in plagiarism but rather experiencing a memory as if it were a new inspiration. Early use[edit] The word was first used by the psychiatrist Théodore Flournoy,[2] in reference to the case of medium Hélène Smith (Catherine-Élise Müller) to suggest the high incidence in psychism of "latent memories on the part of the medium that come out, sometimes greatly disfigured by a subliminal work of imagination or reasoning, as so often happens in our ordinary dreams." How To Use Usenet Usenet is considered to be the most “private” way to share files. In other words, no MPAA or RIAA watching your back. It is fast, has a lot of content, and it’s getting more popular, even though the technology is almost 30 years old.

Son House Eddie James "Son" House, Jr. (March 21, 1902[1] – October 19, 1988) was an American blues singer and guitarist, noted for his highly emotional style of singing and slide guitar playing. After years of hostility to secular music, as a preacher, and for a few years also as a church pastor, he turned to blues performance at the age of 25. He quickly developed a unique style by applying the rhythmic drive, vocal power and emotional intensity of his preaching to the newly learned idiom. In a short career interrupted by a spell in Parchman Farm penitentiary, he developed to the point that Charley Patton, the foremost blues artist of the Mississippi Delta region, invited him to share engagements, and to accompany him to a 1930 recording session for Paramount Records. In 1964, a group of young record collectors discovered House, whom they knew of from his records issued by Paramount and by the Library of Congress.

How to Combine Rescue Disks to Create the Ultimate Windows Repair Disk We’ve covered loads of different anti-virus, Linux, and other boot disks that help you repair or recover your system, but why limit yourself to just one? Here’s how to combine your favorite repair disks together to create the ultimate repair toolkit for broken Windows systems—all on a single flash drive. The ones we’ve covered already? Here’s a quick list of all the ways you can recover your system with a rescue disk: