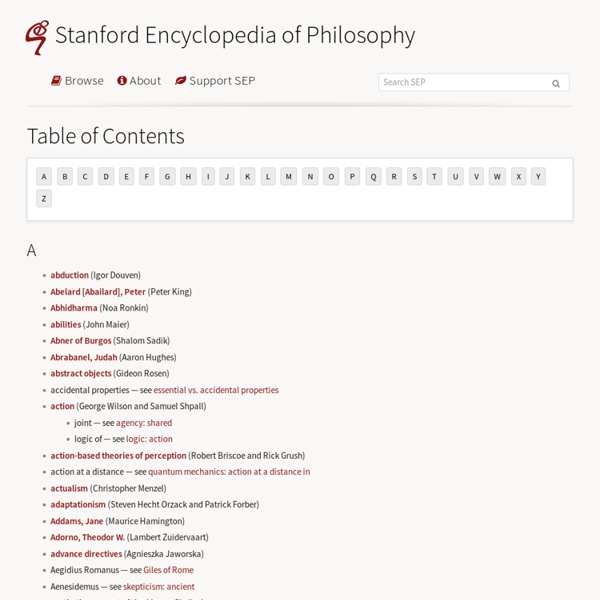 Why Do Most Languages Have So Few Words for Smells? Describe a banana. It's yellow, perhaps with some green edges. When peeled, it has a smooth, soft, mushy texture. It tastes sweet, maybe a little creamy. And it smells like... well, it smells like a banana. Met Museum Open Access Makes 375,000 Pieces Available for Free Claude Monet, Bridge Over a Pond of Water Lilies (1899) Renowned for its comprehensive collection of work that captures “5,000 years of art spanning all cultures and time periods,” New York City’s world famous Metropolitan Museum of Art has recently announced that 375,000 of its pieces in the public domain are now available without restrictions. As an update to a similar 2014 initiative, the new policy, called Open Access, allows individuals to easily access the images and use them for “any purpose, including commercial and noncommercial use, free of charge and without requiring permission from the Museum.”

Concise Encyclopedia of Economics Harry Johnson, a Canadian, was one of the most active and prolific economists of all time. His main research was in the area of international trade, international finance, and monetary policy. One of Johnson's early articles on international trade showed that a country with monopoly power in some good could impose a tariff and be better off, even if other countries retaliated against the tariff. How speaking multiple languages benefits the brain - Mia Nacamulli Amazed by what you have learned about having a bilingual brain? Then, start learning another language now! This website has tons of free lessons, games and quizzes to get you started! Pick one language or even two languages and get that gray matter growing. Speaking more than one language is like exercise for the brain? Read Radiolab blogger Chris Berube discusses the advantages of speaking multiple languages in his post “Mapping the Bilingual Brain” Want to know some more of the advantages of having a bilingual brain?

The Trump Resistance Plan: A Timeline – Russia and President Trump Of the Jan. 6, 2017, meeting, when Comey told Trump about the infamous Steele dossier, Trump said: “He shared it so that I would think he had it out there” as leverage against Trump. Of the Feb. 14, 2017, meeting, when Trump said he hoped Comey could see his way to “letting Flynn go,” Trump said: “He said I said ‘hope’ — ‘I hope you can treat Flynn good’ or something like that. I didn’t say anything. But even if he did — like I said at the news conference on the, you know, Rose Garden — even if I did, that’s not — other people go a step further. Write Better: 3 Ways To Introduce Your Main CharacterWritersDigest.com One of the biggest bugaboos in manuscript submissions is when the author doesn’t properly introduce the protagonist within the first chapter. Readers want to know quickly the protagonist’s sex, age and level of sophistication in the world of the story, and they want to relate to the character on an emotional level. Readers’ interest in the protagonist has to be earned, in other words. If we like a character, then we want to see her do well and we’re willing to follow her around and invest our time and interest in rooting her on in her struggle.

34 Welsh words and phrases that are just as good as popty ping 1. Wnco mwnco It means: Him over there 9 of the Strangest and Loveliest Dioramas Ever While there are endless different kinds of dioramas, there is something that most all of them have in common: the strange beauty that comes from capturing our world in miniature, in exacting detail. Some of the most impressive examples of this craft are on display in museums around the globe, while others a bit more off the beaten path. From bizarre to beautiful, here are nine places to see these intricate three-dimensional snapshots of the world. Fisher Museum Forestry Dioramas

Dream Dictionary The significance of dreams has probably been debated since people first developed the ability to communicate. Despite this, there's still no agreement on why we dream. It's hard to believe that dreams have no meaning at all, though, especially when it's so much fun to try to figure out what they're trying to tell us. To help you interpret your dreams, we've developed a dictionary you can use to look up some of the images and feelings commonly found in these night time visions.

What is a milkshake duck? And why isn't it the word of the year? In June 2016, Twitter user @PixelatedBoat coined a neologism that was arguably robbed as Oxford Dictionaries’ 2017 word of the year: “Milkshake duck”. The tweet went viral for neatly describing a now familiar arc, where the internet rushes en masse to embrace something or someone as cute, worthy, fun or funny – then just as quickly drops it, when it’s revealed to somehow be unpleasantly complicated. In just 140 characters, as was the style at the time, @PixelatedBoat encapsulated social media’s inclination to cast heroes and villains in black and white; to gloss over nuance and pay for it later; its short-sightedness, its fickleness, its breakneck pace, and its penchant for animals doing human things. With 30,000 favourites to date, the tweet is about as close to canon as it gets on a platform built for goldfish memories. “Milkshake duck” has become a useful shorthand, referenced if (or, as seems increasingly the case, when) a favourite is revealed to be problematic.

15 Famous Sculptures in History click 2x Lincoln Memorial, designed by Daniel Chester French & carved by the Piccirilli Brothers (1920) Originally designed to be 10 feet tall, this marble sculpture of the 16th president of the United States was enlarged to 19 feet from head to foot. It depicts Lincoln in contemplation, sitting inside the majestic temple structure that forms the rest of the Lincoln Memorial. From the 1930s, the space has gained importance as a symbol of race relations in the United States. Bird in Space by Constantin Brancusi (1923) Bird in Space is a series of sculptures by Romanian artist Constantin Brancusi, the first being cast in 1923.