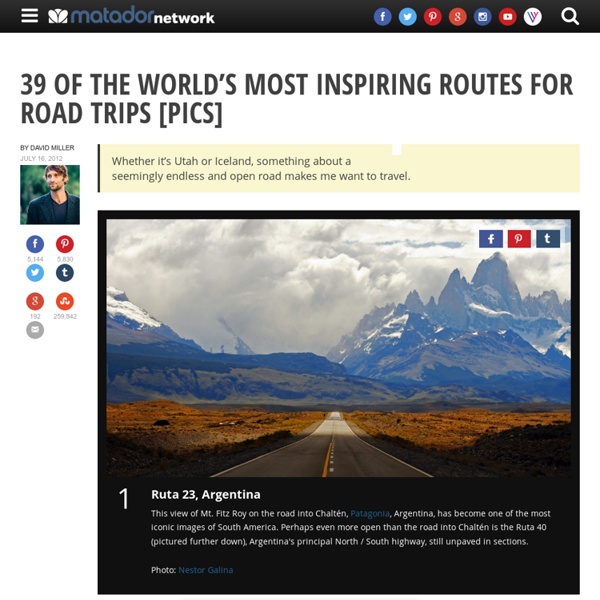 Whether it’s Utah or Iceland, something about a seemingly endless and open road makes me want to travel.

The 10 best treks in the world These 10 classic treks are for serious walkers. All of them require a sturdy pair of lungs, fit legs and a good amount of preparation. However, if you choose to go on any of these trails then you will be rewarded with experiences that last a lifetime. In no particular order: Chocolate Chip Cookie Dough Peanut Butter Cups Soooooo… you know that episode of Sex and the City where Miranda has to dump dish soap on top of chocolate cake just so she will stop eating it?? Uh. Yeeeeeah. These are like… of that caliber. And that totally almost happened to me. You PROBably should not make these if you are home alone for four days.

27 Medicinal Plants Worth Your Garden Space Playful as kids are, accidents happen. And the accident that befallen me at 7 years old was the feeling of the hot exhaust pipe of a motorcycle kissing the skin of my leg. Grandma was around and saw it. Immediately, she took out a knife and slice the thick lower part of the aloe vera plant by the garden and rubbed the exposed end on the burn. Looking back, I realized that it was important to have medicinal plants around the house cause you never know when you might need them. So here are a list of plants that have the highest medicinal value compared to the other million species around the world worth planting around the house.

Amazing Places To Experience Around the Globe (Part 3) Devetashkata Cave - Bulgaria Ben Bulben at County Sligo, Ireland Shark Island - Sydney The Luxury Dhigu Resort, Maldives The luxury Dhigu Resort, Maldives Anantara Dhigu Resort & Spa is encircled by mystic lagoons and unspoilt crystal shores, the resort is a heavenly sanctuary on a secluded paradise island, offering barefoot elegance in one of the world’s most celebrated tropical havens. Here the sparkling turquoise waters of the Indian Ocean offer an endless horizon of aquatic allure and the evocative location is matched by a tranquil island design style. Anantara Dhigu is a luxurious five-star resort hidden on tropical terrain on Dhigufinolhu Island in the Maldives’ South Male Atoll, a mere 35 minute speedboat journey from the island nation’s international airport, or a scenic five minutes by private chartered seaplane. Male-based architect Mohamed Shafeeq from Group X Design Associates and Thailand-based interior design company, Abacus, headed by John Lightbody, have styled the resort’s distinctive environment as a creative complement to the natural beauty of the island. Anantara Dhigu, P.O.

Places That Are Actually Real But Don't Look So These places look so unreal, but they are real! Maybe some of you were on one of these beautiful place, and if one of you did, you are than really happy person who live on this planet! Just look how this photos are cool and so sweet. The microhydro plant My little paradise has a stream that provides enough water flow and head to run a small turbine, to provide electricity to my home. While writing this, the microhydro plant is being implemented, and here are some photos of the process. Since I usually like to start at the end, the first thing I built is the controller: It is an implementation of Jan Portegijs' "Humming Bird", with some changes and adaptations. Scientists discover new species of blind snake in Brazilian river (and please stop sniggering at the back) By Eddie Wrenn Published: 15:46 GMT, 1 August 2012 | Updated: 19:05 GMT, 1 August 2012 Forgive us if this puts you off your dinner because, as snakes go, this is not much of a charmer. The unique creature, atretochoana eiselti, was found after engineers drained a hydroelectric dam which spans a river connected to the Amazon.

Santorini (Thira) Travel Information and Travel Guide - Greece Santorini may well have conquered a corner of your imagination before you've even set eyes on it. With multicoloured cliffs soaring over 300m from a sea-drowned caldera, it rests in the middle of the indigo Aegean, looking like a giant slab of layered cake. The island spoons the vast crater left by one of the biggest volcanic eruptions in history. Smaller islands curl around the fragmented western edge of the caldera, but it is the main island of Thira that will take your breath away with its snow drift of white Cycladic houses lining the cliff tops and, in places, spilling like icy cornices down the terraced rock. 10 Best Hiking Trails in the World If everyone placing personal ads who claimed the hobby of “hiking” really did it with any regularity, the earth would have been trampled flat decades ago. But those who really do enjoy this peaceful outdoor activity have plenty of incredible choices in every corner of the world. Here are the ten best hikes on the planet, each with a combination of scenery and special extras that make them well worth going out of your way to enjoy. You can use Indie, BootsnAll’s multi-country flight finder, to search and book flights for your trip. Plan a round the world trip around these great hiking spots, and sign up for Plan Your RTW Trip in 30 Days to learn the ins and outs of planning a trip of this magnitude (it’s free!). Tongariro Northern Circuit, North Island, New Zealand

40 free things to do in New York City Seeing the bulk of New York City's biggest attractions can mean spending a hefty chunk of a trip's budget on tickets. Empire State Building? $27. The Met? $25. The Guggenheim and the Whitney go for $22 and $20, respectively. Human Useless Facts Men fart an average of 17 times a day, and women fart an average of 9 times a day. If you fart constantly for 6 years, 9 months and 23 days you would produce enough gas to explode an atomic bomb. The longest ever penis recorded by scientists is 13.5 inches. Humans are only second to cats for having the dirtiest mouths. It takes about 40 muscles to smile, but only 4 to pull the trigger of a decent rifle. Beard hair grows at twice its usual rate when you're in a plane. The 50 Best Burgers in San Francisco The Gott's burger definitely made the cut.Photo: Georg Lester There was a time not that long ago when having a burger on your menu was déclassé unless you were a diner. Jeremiah Tower led the trend to change that, at least in San Francisco, offering a burger at Stars, and now, almost thirty years later, we live in a city chock full of fancy burgers. We still have our share of great cheap burgers, too, most of which get held up against the standard bearer: In-N-Out. So, when it came to compiling a list of the 50 best in San Francisco (with a couple nods in the direction of Oakland and Berkeley), we actually found ourselves having to trim off some perfectly excellent hunks of ground beef — even a classic or two — in order to make room for the plethora of high-quality burgers you can now find across the city.