Scientists Invent Particles That Will Let You Live Without Breathing 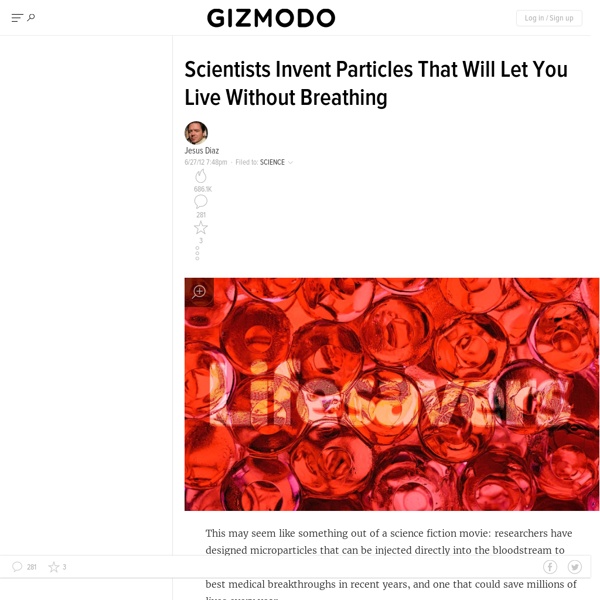 World's first GM babies born Published: 05 May 2001 The world's first geneticallymodified humans have been created, it was revealed last night. The disclosure that 30 healthy babies were born after a series of experiments in the United States provoked another furious debate about ethics. So far, two of the babies have been tested and have been found to contain genes from three 'parents'. Fifteen of the children were born in the past three years as a result of one experimental programme at the Institute for Reproductive Medicine and Science of St Barnabas in New Jersey. The babies were born to women who had problems conceiving. Genetic fingerprint tests on two one-year- old children confirm that they have inherited DNA from three adults --two women and one man. The fact that the children have inherited the extra genes and incorporated them into their 'germline' means that they will, in turn, be able to pass them on to their own offspring. Some experts severely criticised the experiments.

Aquaponics greenhouse for - DIY We’re here to tell you it is possible – but don’t take our word for it: ask Aquaponics Steve. Aquaponics is defined as “sustainable food production system that combines plant-growing with a traditional aquaculture (raising aquatic animals such as snails, fish). It was Steve’s years working in a pet shop that gave him the know-how. The secret is in breeding the bacteria from fish waste – sounds yucky but it works – with no need to use creepy chemicals. He shows you how to make a tiny greenhouse and stock it full of plants for just $50. The greenhouse is made from found lumber to create the structure which can be any shape and size depending on the dimensions of your balcony or yard. By running the water through black tubing (IV tubing from from a medical supplies store), he can tru the water temperature from cold to tepid – which is what crayfish need. He does not say where got the earth, but the compost presumably was from a Garcen center.

Solar-Powered Supertrees Sprout at Singapore’s Gardens by the Bay – New Photos! Gardens by the Bay-Grant Associates We just caught sight of this incredible crop of solar-powered Supertrees rising at Singapore's Gardens By The Bay, a 101-acre conservatory that will soon blossom with 226,000 plants and flowers from all over the world. Designed by Grant Associates, the 18 Supertrees will serve as towering vertical gardens that collect rainwater, generate solar power, and act as venting ducts for the conservatories. Although the gardens aren't expected to be complete for another full year, construction is moving right along and the Supertrees are truly a magical sight to behold. Gardens by the Bay will be Singapore’s largest garden project and is central to the country’s continued development of Marina Bay. Managed by the Singapore‘s National Park Board, the gardens will feature two cooled conservatories – the Flower Dome (cool dry biome) and Cloud Forest (cool moist biome), as well as themed horticulture gardens, heritage gardens, and hundreds of thousands of plants from around the world.

A Former Chicago Meatpacking Plant Becomes a Self-Sustaining Vertical Farm - Design Launch Slideshow The Plant occupies a former meatpacking plant and slaughterhouse in the Union Stock Yards, transforming a huge brick building that once specialized in bringing red meat to the masses into a green space all about urban farming without waste. The interior looks like something straight out of a scientific-environmental fantasy. Tenants include aquaponic farms (think vegetables on water beds flourishing under colored UV lights), a tilapia fish farm, beer and Kombucha tea breweries, a mushroom garden, and a host of independent bakers and caterers that will work together in a communal kitchen space. Future plans include living walls and rooftop gardens. But the most ambitious part of the building is its focus on producing "net-zero waste" in its 93,500-square-foot space. “Industrial ecology—the concept of using other people’s waste as input—is fascinating. The building, which was purchased in July 2010, is currently undergoing renovations by a team of volunteers.

Robot Prostitutes, the Future of Sex Tourism Let's cut to the chase. Would you pay to have sex with a robot prostitute? Ian Yeoman and Michelle Mars think someone will. Yeoman is a futurist with an interest in tourism, and Mars is a sexologist at the University of Wellington's Victoria Management School in New Zealand. The duo just co-authored a paper entitled "Robots, Men and Sex Tourism" for the current issue of Futures. BLOG: Bar-coded Condoms Track Where You Have Sex In their paper, they envision a future where robotic prostitutes are the solution to the sex industry's most glaring problems, such as human trafficking, human degradation and the spread of sexually transmitted infections. Playing off the "Yab-Yum," once one of Amsterdam's most exclusive brothels before its closure in 2008, Yeoman and Mars imagine what the red-light district will look like in the year 2050: The Yub-Yum is Amsterdam's top sex club for business travelers located beside a 17th century canal house on the Singel. What's your opinion? via io9

MIT researchers seek to create robotic 'self-sculpting sand' By Doug Gross, CNN It could be something out of "Harry Potter," or a scene from "Terminator 2" if you want to take it to a creepier place. Take a box full of sand and tell it what you need - say a hammer, a ladder or a replacement for a busted car part. Bury a tiny model of what you need in the sand, give it a few seconds and - voila! - the grains of sand have assembled themselves into a full-size version of the model. MIT robotics researchers say such a magical sandbox could be no more than a decade away. A team from the school's Computer Science and Artificial Intelligence Laboratory says they've developed algorithms that could enable "smart sand" - essentially miniscule, simple robots that would communicate with each other about how to align together properly once they've been given a model to copy. The team has already done limited testing with larger cubes - 10 millimeters wide with rudimentary microprocessors inside and magnets on four of their sides.

Evacuated Tube Transport Technologies : et3 Network : Space Travel on Earth™ Chinese worker builds "egg" house to beat high cost of living BEIJING, Dec. 3, 2010 (Xinhua) -- An egg-shaped small cabin made of bamboo bars, bags of grass seeds and wood crumbs appeared in the yard of a residential area in Beijing recently, arousing curiosity of many passers-by. Its owner, Dai Haifei, 24, coming from the countryside of central China's Hunan Province, is one of the "bei piao" group, a nickname for young dream hunters migrating to Beijing without a registered residence. Upon college graduation, Dai came to Beijing alone and worked in an architecture design company. Inspired by a concept creation dubbed "eggs laid by city" displayed in his company's design show, he built the "egg cabin" with 6,427 yuan RMB (about 965 US dollars) in two months. By living in this cabin next to his office building, the young man was quite pleased with the money he saved from house rent. With an area of 6 square meters and a height of 2 meters, the "egg" can accommodate one single bed and a small bedstand.

Artificially Intelligent Being Designs Videogame for Humans Writers such as Ray Kurzweil defined the so called "Singularity" as the moment in time when an artificial intelligence becomes powerful enough to design another intelligence that surpasses, and ultimately renders powerless, human intelligence. The new game designed from scratch by a freaking computer, may not be enough to push mankind over the Singularity hump once and for all, but I do know one thing: We're a hell of a lot closer now that an artificially intelligent robot has personally developed a game in which other artificially intelligent robots try to hunt and kill human beings. Now, before you try to arm yourselves with makeshift mobile EMPs and struggle to remember the correct pronunciation of "Klaatu barada nikto," perhaps a more detailed explanation is in order. A few years ago, mad scientist Michael Cook began work on what (who?) Source: NewScientist

How Engineering the Human Body Could Combat Climate Change - Ross Andersen - Technology Some of the proposed modifications are simple and noninvasive. For instance, many people wish to give up meat for ecological reasons, but lack the willpower to do so on their own. The paper suggests that such individuals could take a pill that would trigger mild nausea upon the ingestion of meat, which would then lead to a lasting aversion to meat-eating. Other techniques are bound to be more controversial. For instance, the paper suggests that parents could make use of genetic engineering or hormone therapy in order to birth smaller, less resource-intensive children. The lead author of the paper, S. Judging from your paper, you seem skeptical about current efforts to mitigate climate change, including market based solutions like carbon pricing or even more radical solutions like geoengineering. One human engineering strategy you mention is a kind of pharmacologically induced meat intolerance. Liao: There is a widely cited U.N. S. Liao: There are a couple of ways, actually. Liao: Yes.

Flying Swarm Of Robots Gives Protesters And Activists Free Wi-Fi, On The Go During the 2011 Egyptian revolution, the government unplugged the Internet. Protesters were left without Internet, and thereby the ability to communicate even locally, instantly. Electronic Countermeasures is a project by Liam Young of think tank Tomorrow’s Thoughts Today and Unknown Fields Division, with assistance from Eleanor Saitta, Oliviu Lugojan-Ghenciu, and Superflux. “These drones would fly off and hover above the city, and create ad hoc connections and networks in a new form of nomadic territorial infrastructure,” Young tells Co.Design, “a flock of interactive autonomous drones that form their own place specific, temporary, local, Wi-Fi community--a pirate Internet.” Rather than carry satellites to uplink to the greater Internet, Young imagines his swarm as a highly site-specific means to create peer-to-peer communication (think text messaging or the old Napster file sharing model). There’s no reason the idea couldn’t scale.