Introduction to Heredity and Traits 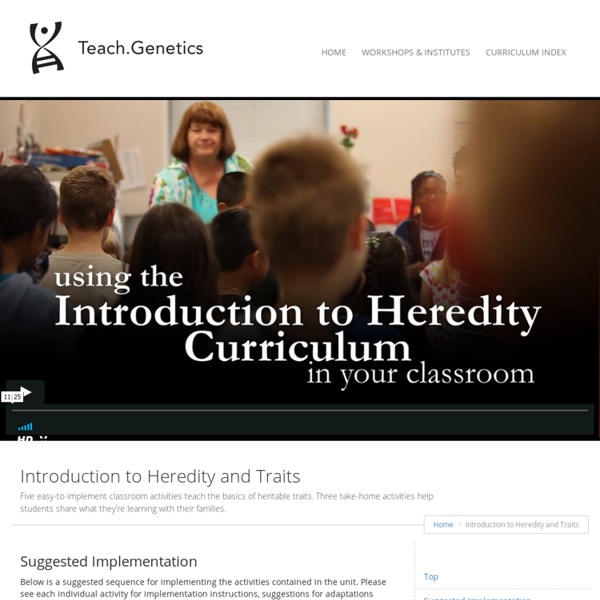 The 2004 publication Investigating Safety: A Guide for High School Teachers by Texley et al. has raised an alarm in the teaching community about the usefulness and safety of PTC taste testing. This has led to PTC being banned from many schools and districts - we believe unnecessarily. Yes, PTC is toxic. In rats, the most sensitive animals tested, the oral LD50 of PTC (the amount that killed 50% of test animals) is 3 mg/kg. However, PTC is so intensely bitter that tasters can detect it in miniscule quantities. There is no question that PTC is toxic (LD50 in rat is 3mg/kg, in mouse 10mg/kg, and in rabbit 40mg/kg), but so is table salt (acute toxicity in humans at 500-1000mg/kg).

Activity Detail What You'll Need WaterSaltShampoo or dish soap (clear shampoo with EDTA, such as Suave Daily Clarifying, works best)Cold 70% to 95% isopropyl alcohol (place in freezer overnight)Ziploc-type bagStrawberries or other foods like grapes, kiwi, tomatoes, bananas or lettuceTest tubeCoffee filterPlastic cupPipette What to Do Create the DNA extraction buffer by mixing 450 milliliters of water with two teaspoons of salt. Gently add 50 milliliters of shampoo (this recipe is enough for 50 groups of students). Place a strawberry in a Ziploc bag and gently mash for two minutes, being careful not to pop the bag. Assemble the DNA filter by draping a coffee filter over a plastic cup. Pour a small amount (three to four milliliters) of the filtered strawberry solution into a test tube. What's Happening The shampoo helps dissolve the fatty cell membrane, while the salt makes the DNA molecules stick together and breaks up the proteins that bind to the DNA.

5 Helpful Tips for Teaching Genetics | The TpT Blog This post originally appeared on the blog Biology Roots. Here is #2 for my “5 Helpful Tips” series. If you missed the first one, check out 5 Helpful Tips for Teaching Photosynthesis. Genetics is one of my favorite things to teach *cue sparkly harp music*. Here is a complete list of human genetic myths that you can read for your consideration. Busting Student Misconceptions: Students tend to struggle with some terminology — it can be really difficult for students to differentiate between terms such as DNA, gene, and allele. Stay Science Classy, Vanessa Vanessa Jason is a Massachusetts native who loves designing captivating science resources; you can find her resources in her TpT store Biology Roots.

First identical twins with different skin colour born in the UK  Identical twins Amelia and Jasmine are thought be the first black and white twins born in the UK, despite coming from the same egg. The girls were born to mum Libby Appleby, 37, from West Rainton, County Durham who is white and her partner Tafadzwa Madzimbamuto, 40, who is black. They are identical or monozygotic twins, meaning they developed from the same zygote, which split and formed two embryos. Scroll down for video Libby Appleby, 37, from West Rainton, County Durham was told she wouldn't be able to tell her identical twin babies apart. Elder twin Amelia (right) has dark skin, black hair and brown eyes, her sister Jasmine has fair skin, blue eyes and mousey curls Monozygotic twins are always the same sex, share identical blood groups and genetic make-up and always closely resemble each other. There are other reported cases of non-identical twins being born with different coloured skin and eyes to mixed race couples in the UK. An ultrasound scan of identical twins Jasmine and Amelia.

Why Dogs Have Floppy Ears Tuesday is an anniversary worth noting: On Jan. 30, 1868, Charles Darwin published a follow-up to his masterpiece On The Origin Of Species. This less-popular tome (897 pages!) contained a vexing puzzle: Why do pets and livestock tend to have "drooping ears?" Wolves, for example, have perky, upright ears. But the ears of many dogs are distinctly floppy. "The incapacity to erect the ears," Darwin concluded, "is certainly in some manner the result of domestication." A century later, an ambitious (and adorable) experiment in the Soviet Union proved him right. Belyayev took 130 foxes from fur farms and started a breeding program. In just a few dozen generations, Belyayev's foxes were tame. But what's behind this mysterious change?

DNA from the Beginning - An animated primer of 75 experiments that made modern genetics. DNA from the Beginning is organized around key concepts. The science behind each concept is explained by: animation, image gallery, video interviews, problem, biographies, and links. DNAftb blog: It's the season of hibernation, something I've always wished I could do. Feature: We have relaunched the Weed to Wonder site as a flexible "e-book" that can be viewed as a website, an app, or a printable PDF. Mailing List Gene News - ‘Alien’ DNA makes proteins in living cells for the first time Find the DNALC on: Language options: