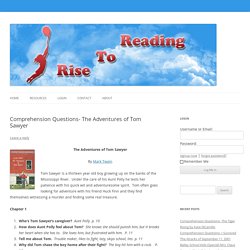 Under the care of his Aunt Polly he tests her patience with his quick wit and adventuresome spirit. Tom often goes looking for adventure with his friend Huck Finn and they find themselves witnessing a murder and finding some real treasure. Chapter 1 Who’s Tom Sawyer’s caregiver? Chapter 2 What did Tom have to do Saturday morning as a punishment for his ruined clothes? Chapter 3 What rewards did Tom get when his aunt thought he’d done the fence? Chapter 4 When Tom was doing his lessons, why did he choose to memorize the Sermon on the Mount? The Adventures of Tom Sawyer Unit Study [Lit21] - $5.95 : Confessions of a Homeschooler, Online Store for Printables, Curriculum, Preschool, and More! Personal Use Download. 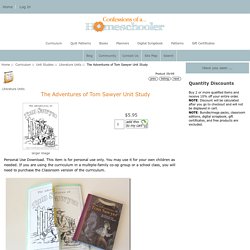 This item is for personal use only. You may use it for your own children as needed. If you are using the curriculum in a multiple-family co-op group or a school class, you will need to purchase the Classroom version of the curriculum. Story Summary: Log in. The Adventure Of Tom Sawyer - Bedtime Story For Kids. Character Map. A Map Of The Most Popular Fictional Characters From Every. The Adventures of Tom Sawyer: Historical Fiction. The Adventures of Tom Sawyer: Plot Overview. An imaginative and mischievous boy named Tom Sawyer lives with his Aunt Polly and his half-brother, Sid, in the Mississippi River town of St. 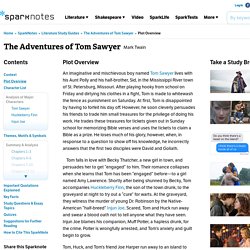 Petersburg, Missouri. After playing hooky from school on Friday and dirtying his clothes in a fight, Tom is made to whitewash the fence as punishment on Saturday. At first, Tom is disappointed by having to forfeit his day off. However, he soon cleverly persuades his friends to trade him small treasures for the privilege of doing his work. He trades these treasures for tickets given out in Sunday school for memorizing Bible verses and uses the tickets to claim a Bible as a prize.

Tom falls in love with Becky Thatcher, a new girl in town, and persuades her to get “engaged” to him. Tom, Huck, and Tom’s friend Joe Harper run away to an island to become pirates. Back in school, Tom gets himself back in Becky’s favor after he nobly accepts the blame for a book that she has ripped. The Adventures of Tom Sawyer Plot Chart by Patrick Valente on Prezi. Campfire Graphic Novels The Adventures of Tom Sawyer, Thu, 1 May 14. 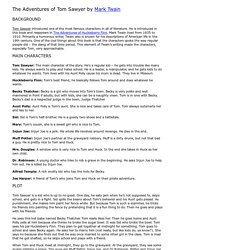 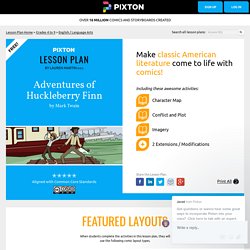 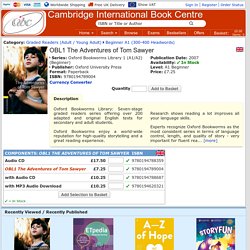 Oxford Bookworms enjoy a world-wide reputation for high-quality storytelling and a great reading experience. Research shows reading a lot improves all your language skills. Experts recognize Oxford Bookworms as the most consistent series in terms of language control, length, and quality of story - very important for fluent rea... [more]ding and extensive reading. Key Features: • Graded according to the acclaimed Bookworms syllabus • Award-winning titles • Stunning covers • Extended activities section at the back • Word count and CEF level on every cover • Audio CDs for the complete text • Free print and online teachers' support for every title: www.oup.com/bookworms [less] 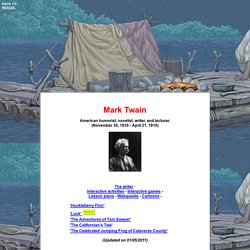