Halden Packard. Coalescing Around the Commons. What we strive to hold, share and take care of in common Most of us who are actively seeking to create a world where people and nature can thrive are actually nurturing a piece of the commons. 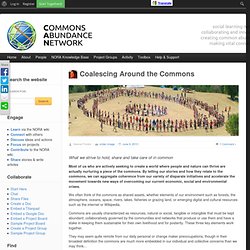 By telling our stories and how they relate to the commons, we can aggregate coherence from our variety of disparate initiatives and accelerate the movement towards new ways of overcoming our current economic, social and environmental crises. We often think of the commons as shared assets, whether elements of our environment such as forests, the atmosphere, oceans, space, rivers, lakes, fisheries or grazing land, or emerging digital and cultural resources such as the internet or Wikipedia. Commons are usually characterized as resources, natural or social, tangible or intangible that must be kept abundant; collaboratively governed by the communities and networks that produce or use them and have a stake in keeping them sustainable for their own livelihood and for posterity. Federating Efforts. The commons as scaffold and underlying guiding principle. 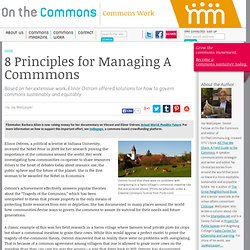 For more information on how to support this important effort, see Indiegogo, a commons-based crowdfunding platform. Ostrom found that there were no problems with overgrazing in a Swiss village’s communal meadow like the one pictured above. (Photo by juhansen under a Creative Commons license from Flickr.com) Elinor Ostrom, a political scientist at Indiana University, received the Nobel Prize in 2009 for her research proving the importance of the commons around the world.

Ostrom’s achievement effectively answers popular theories about the “Tragedy of the Commons,” which has been interpreted to mean that private property is the only means of protecting finite resources from ruin or depletion. 8 Principles for Managing a Commons 1. 2. 3. 4. 5. 6. 7. 8. Governing the Commons by Elinor Ostrom: Review. Ostrom begins by noting the problem of natural resource depletion—what she calls “common pool resources”—and then goes on to survey three largely complementary (“closely related concepts”) major theories that attempt to explain “the many problems that individuals face when attempting to achieve collective benefits”: Hardin’s “tragedy of the commons,” the prisoner’s dilemma, and Olson’s “logic of collective action.” 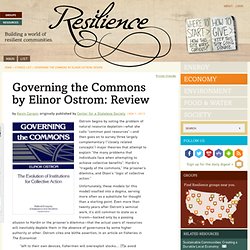 Unfortunately, these models (or this model) ossified into a dogma, serving more often as a substitute for thought than a starting point. Even more than twenty years after Ostrom’s seminal work, it’s still common to state as a truism—backed only by a passing allusion to Hardin or the prisoner’s dilemma—that the actual users of resources will inevitably deplete them in the absence of governance by some higher authority or other. Ostrom cites one blithe assertion, in an article on fisheries in The Economist: “left to their own devices, fishermen will overexploit stocks…. 1. 2. Elinor Ostrom Debunks Tragedy of the Commons. Nobel Prize-winning economist Elinor Ostrom proved that people can—and do—work together to manage commonly-held resources without degrading them. posted Oct 27, 2009 The biggest roadblock standing in the way of many people’s recognition of the importance of the commons came tumbling down when Indiana University professor Elinor Ostrom won the Nobel Prize for Economics. 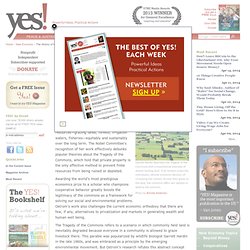 Garrett Hardin described the Tragedy of the Commons with a hypothetical example of shared herding land: If all herders make the individually rational economic decision of increasing the number of cows they graze on the land, the collective effect will deplete or destroy the common. Over many decades, Ostrom has documented how various communities manage common resources—grazing lands, forests, irrigation waters, fisheries—equitably and sustainably over the long term. Garrett Hardin himself later revised his own view, noting that what he described was actually the Tragedy of the Unmanaged Commons.

Elinor Ostrom's 8 Principles for Managing A Commmons. OTC co-sponsers a Commons Festival featuring the Nobel Prize winner Oct. 7-8 in Minneapolis Photo by the International Land Coalition under a Creative Commons license from Flickr.com Elinor Ostrom shared the Nobel Prize in Economics in 2009 for her lifetime of scholarly work investigating how communities succeed or fail at managing common pool (finite) resources such as grazing land, forests and irrigation waters. 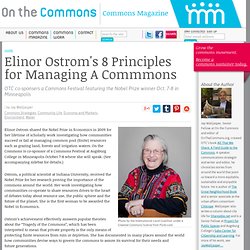 On the Commons is co-sponsor of a Commons Festival at Augsburg College in Minneapolis October 7-8 where she will speak. Why Elinor Ostrom Matters. 8 Principles for Managing A Commmons.