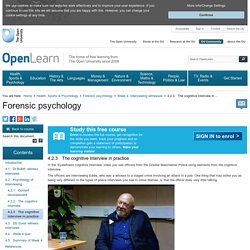 It's up to the police teams treating this as a real crime to make sense of what they're being told. Rule one of cognitive interviewing is to let the interviewees do most of the talking. They began effing and jeffing, like swearing quite forcefully. Not a problem for detective sergeant Wendy Haslem who is interviewing, or rather listening to Eddie. The next thing, he got more violent. Well the reason we've asked him for a recall, and we don't interrupt, is so that he is using his own words and his own memory. This geezer was doing all the swearing, dived on top of him.

If we were to stop him or ask questions and stop that flow and it becomes a stop start thing, so there is no fluidity to it, and it becomes quite disjointed. And somebody said 'He's bleeding, he's stabbed him'. Freddie's free recall draws to a natural conclusion and Wendy begins the next stage of the interview process. BBC - Terry Pratchett - Living with Alzheimer's - Episode One (2009) (480p) Copy of Loftus and Palmer Eyewitness Testimony Experiment by Holly Jewell on Prezi. Kerboodle. BBC - Terry Pratchett - Living with Alzheimer's - Episode Two (2009) (480p)

What is Alzheimer's Disease? - Living with Alzheimer's Film Project. Alzheimer’s is a slow, fatal disease of the brain affecting one in ten people over the age of 65. 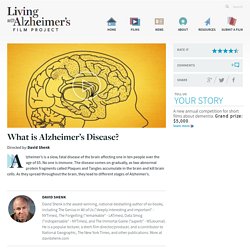 No one is immune. The disease comes on gradually, as two abnormal protein fragments called Plaques and Tangles accumulate in the brain and kill brain cells. As they spread throughout the brain, they lead to different stages of Alzheimer’s. David Shenk David Shenk is the award-winning, national-bestselling author of six books, including The Genius in All of Us ("deeply interesting and important" - NYTimes), The Forgetting ("remarkable" - LATimes), Data Smog ("indispensable" - NYTimes), and The Immortal Game ("superb" - WSJournal). Schizophrenia - Memory Disorders - The Human Memory. Schizophrenia is a mental disorder mainly characterized by abnormalities in the perception or expression of reality, usually manifesting itself in hallucinations, "voices", paranoid delusions or disorganized speech and thinking, often with significant social or occupational dysfunction. 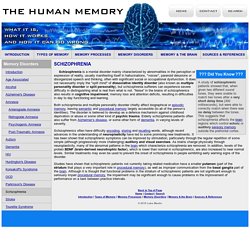 It does not necessarily imply the "split mind" of dissociative identity disorder (also known as multiple personality disorder or split personality), but schizophrenia sufferers can experience severe difficulty in distinguishing what is real from what is not. “Noise” in the brains of schizophrenics also results in cognitive impairment, memory loss and attention deficits, resulting in difficulties in day to day functioning and learning. Both schizophrenia and multiple personality disorder chiefly affect biographical or episodic memory, leaving semantic and procedural memory largely accessible (to all of the person’s identities). Anterograde Amnesia - Memory Disorders - The Human Memory. Anterograde amnesia is the loss of the ability to create new memories, leading to a partial or complete inability to recall the recent past, even though long-term memories from before the event which caused the amnesia remain intact. 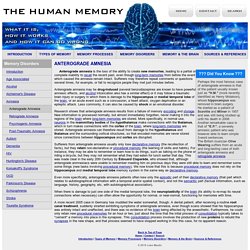 Sufferers may therefore repeat comments or questions several times, for example, or fail to recognize people they met just minutes before. Anterograde amnesia may be drug-induced (several benzodiazepines are known to have powerful amnesic effects, and alcohol intoxication also has a similar effect) or it may follow a traumatic brain injury or surgery in which there is damage to the hippocampus or medial temporal lobe of the brain, or an acute event such as a concussion, a heart attack, oxygen deprivation or an epileptic attack. Less commonly, it can also be caused by shock or an emotional disorder. Research shows that anterograde amnesia results from a failure of memory encoding and storage. Eyewitness Testimony Part 1. Eyewitness Testimony Part 2.