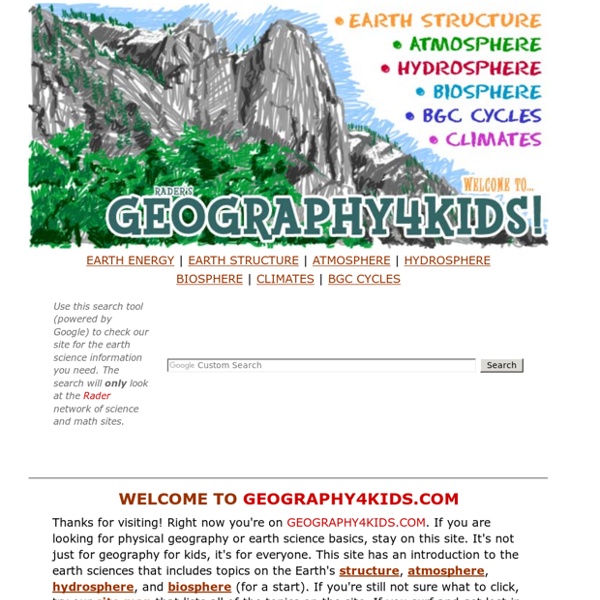 OKAY! Let's start here... Many of you may not be familiar with PHYSICAL GEOGRAPHY. It's the biggest EARTH SCIENCE around. It uses many ideas from other sciences that you have seen before. We can only begin to explain how ideas from many different fields combine into the knowledge of physical geography.

The history of the European Union EU Pioneers The following visionary leaders inspired the creation of the European Union we live in today. Without their energy and motivation, we would not be living in the sphere of peace and stability that we take for granted. From resistance fighters to lawyers and parliamentarians, the EU pioneers were a diverse group of people who held the same ideals: a peaceful, united and prosperous Europe.

How classrooms look around the world — in 15 amazing photographs To mark last month’s World Teachers’ Day (sponsored by UNESCO , the United Nations Educational, Scientific and Cultural Organization), photographers from Reuters took pictures around the world of educators with their students in a telling exhibit of the very different circumstances under which children attend school. Here are 15 pictures taken by Reuters photographers, revealing the spectrum of “classrooms” — from those with literally no resources to those well-stocked and housed. Teacher Mahajera Armani and her class of girls pose for a picture at their study open area, founded by Bangladesh Rural Advancement Committee (BRAC), outside Jalalabad city, Afghanistan September 19, 2015. (Reuters) Class one children aged between six and seven years old pose for pictures in their classroom at Gifted Hands Educational Centre in Kenya’s Kibera slum in the capital Nairobi, September 16, 2015.

Earth at Night 2012 Account Options Sign in Earth at Night 2012 Number Games for Kids Online - SplashLearn Frequently Asked Questions: Q1: How do I teach my kindergartener to recognize numbers? Ans: You can use objects, pictures, counters or abacus to make your kindergarten learn and recognise numbers. Global Learning This past year, students from around the world came together to collaborate on world issues affecting their communities, taking the concept of global learning and turning it into a reality. In GlobalCOlab (GCL), Students teaching students from around the world, has connected students and educators from different cultures and religions from around the world to cross-cut disciplines, curricula, and traditional subjects to empower participants through student-led and student-created topics. These topics are based around global issues affecting each student’s community.