2015 Ranking of Top 100 Best Places to Live in America. Major Anasazi Regions and Sites. At least from the time of Jesus, and for possibly 1,500 years before, the Anasazi occupied a huge chunk of mostly arid and barren real estate in the Four Corners Area of the American Southwest where four modern states – Colorado, New Mexico, Arizona and Utah – join at one point. 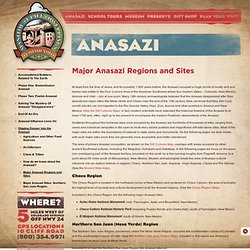 Many 19th century archaeologists believed that the Anasazi disappeared after they abandoned major cities like Mesa Verde and Chaco near the end of the 13th century. 32 Surreal Places On Earth That Belong In A Dream. I’ve Never Wanted To Travel So Badly… During the rainy season, the world’s largest salt flat becomes the world’s largest mirror. 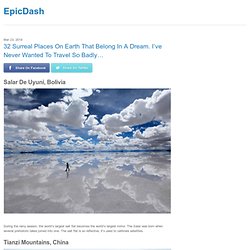 The Salar was born when several prehistoric lakes joined into one. The salt flat is so reflective, it’s used to calibrate satellites. Tianzi Mountains, China These unqiuely tall and thin mountains are so alien that they were used in James Cameron’s “Avatar.” Formed underwater 380 million years ago, the ground rose as a result of volcanic activity. Sentinels of the Arctic, Finland These sentinels are actually giant trees covered in snow and ice. Reed Flute Caves, China. Zone Of Alienation – Pripyat: Middle School #3. Amarillo, TX. Norton I, Emperor of the United States. Joshua A. 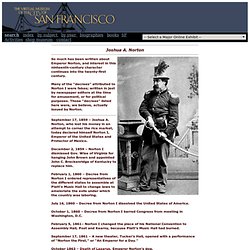 Norton So much has been written about Emperor Norton, and interest in this ninteenth-century character continues into the twenty-first century. Many of the “decrees” attributed to Norton I were fakes; written in jest by newspaper editors at the time for amusement, or for political purposes. Those “decrees” listed here were, we believe, actually issued by Norton. September 17, 1859 – Joshua A. December 2, 1859 – Norton I dismissed Gov. February 1, 1860 – Decree from Norton I ordered representatives of the different states to assemble at Platt’s Music Hall to change laws to ameloriate the evils under which the country was laboring. July 16, 1860 – Decree from Norton I dissolved the United States of America. 6 Things From History Everyone Pictures Incorrectly. 8 Historic Symbols That Mean The Opposite of What You Think. Misunderstood By: Libertarians, Glenn Beck. 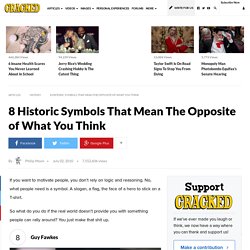 Glenn Beck has recently found a soul mate in Thomas Paine, the Founding Father known for his Revolutionary War tract Common Sense. So much so that he's gone so far as to rewrite Common Sense for the modern era, essentially stuffing words hand over fist into the mouth of a centuries-dead political philosopher for the soul-shriveling disgust Beck knows Paine would feel about Barack Obama.

Libertarians and tea partiers are so enamored by their new ideological BFF that they've taken to dressing up like him on YouTube and spouting off about the evils of taxation, weak foreign policy and too many brown people. But Beck and his minions could probably benefit from actually reading some Thomas Paine. 5 Artifacts That Will Shatter Your Image of the Middle Ages.

I don't know about you, but I always thought the Middle Ages were strictly about dying at age 30 and giant birds posing as doctors. 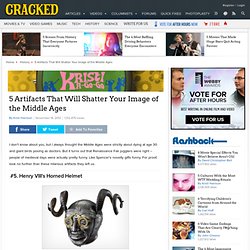 But it turns out that Renaissance Fair jugglers were right -- people of medieval days were actually pretty funny. Like Spencer's novelty gifts funny. For proof, look no further than these hilarious artifacts they left us. #5. 7 Insanely Advanced Weapons History Somehow Forgot About. As we have mentioned before, technological breakthroughs aren't always built upon or improved -- oftentimes they're just outright forgotten, destroyed or lost to some ridiculous accident. 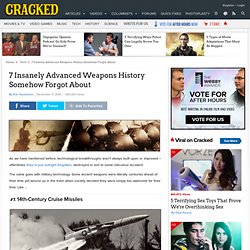 The same goes with military technology. Some ancient weapons were literally centuries ahead of their time yet wound up in the trash when society decided they were simply too awesome for their time. Like ... 14th-Century Cruise Missiles As you're about to find out, the Chinese have a knack for inventing truly awesome things and then forgetting all about them. The Chinese also invented tofu, but that's barely interesting enough to deserve a caption. 10 Eerie Items of Clothing from the Past.

Creepy Fashion is a product of its time. 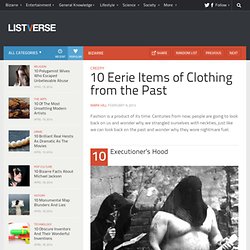 Centuries from now, people are going to look back on us and wonder why we strangled ourselves with neckties, just like we can look back on the past and wonder why they wore nightmare fuel. When we think of an executioner, that’s what we picture—a brute in a mask. The image is so iconic that it continues to show up in pop culture long after we stopped beheading the condemned. How many of us have seen a movie or played a video game where a masked executioner lumbers after our hero?

Contrary to popular belief, the hood was far from common. 17 Apocalypses We'll Never See Coming Slideshow. 10 Genocides Forgotten By History. History It can be almost impossible to keep up on all types of world affairs but it seems like everyone should be aware of a possible genocide. 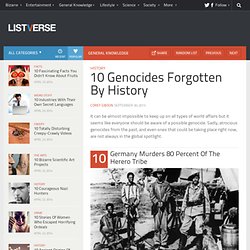 Sadly, atrocious genocides from the past, and even ones that could be taking place right now, are not always in the global spotlight. 10Germany Murders 80 Percent Of The Herero Tribe The southern African country of Namibia is a tough place to live. Roseborough Springs, Harrison County, Texas, USA - Maps, Photos, Weather, Local Links.