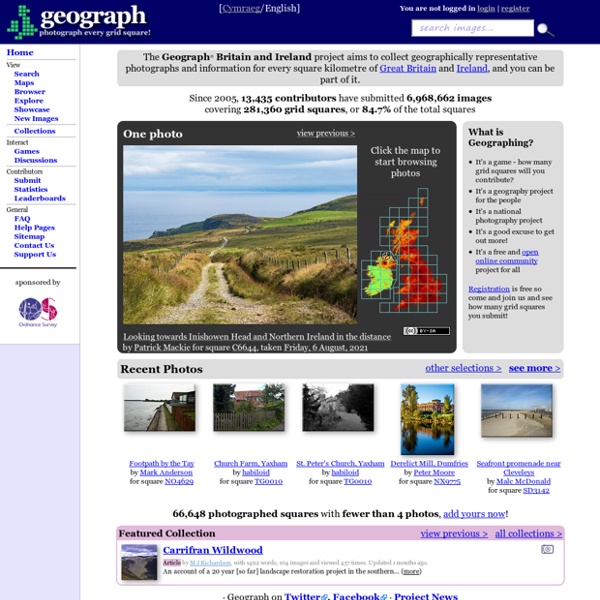 The Geograph® Britain and Ireland project aims to collect geographically representative photographs and information for every square kilometre of Great Britain and Ireland, and you can be part of it. 12,047 contributors have submitted 3,920,312 images covering 271,190 grid squares, or 81.7% of the total Today's photo Click the map to start browsing photos What is Geographing? It's a game - how many grid squares will you contribute?

Learn English by Watching Films Archives - Lingvistov Marley and me (2008) Marley & Me is a 2008 American comedy-drama about the titular dog, Marley. It was directed by David Frankel and the screenplay by Scott Frank and Don Roos is based on the memoir of the same name by John Grogan. After their wedding, newspaper writers John and Jennifer Grogan move to Florida. In an attempt to stall Jennifer’s «biological clock», John gives her a puppy.

DIY - Concrete Garden Edging - Quiet Corner Looking for an inexpensive, lasting way to set apart your planting beds? Use these steps to make concrete garden edging in any length you wish. Always affordable and at once both decorative and functional, concrete garden edging effectively defines garden beds, tree surrounds, and driveway curbs, their versatility enabling you to match any landscape contour. Perhaps most appealing of all is that concrete garden edging lasts for years and years. Once you’ve completed this project, you can forget all about it, resting assured of its durability.

St Margaret, Whaddon - Gloucestershire St Margaret's stands on a slight eminence, with fine views down the Severn Vale from the Churchyard. The name Whaddon is from the Saxon "hwaete dun" meaning "the hill where wheat is grown". The building probably dates from around 1200, consisting of a chancel and nave, with possibly a little turret for a bell. 200 search engines You can place your slogan here. This would also be a great spot for a top product pitch. 200+ Search engines all in one easy to find place

The Global Solution to Extinction The one major reserve in the United States that has been subjected to a complete census is the Great Smoky Mountains National Park. Fifty thousand hours of field work there by specialists and assistants have yielded records of 18,000 species of animals and microorganisms alone, with 40,000 to 60,000 considered likely on the roster when all transients, as well as rare and undescribed species, have been registered. 50 percent of habitats saved. 25 percent of habitats saved. 15 percent of habitats saved (roughly the total preserved land habitat in the world today). The mapping of Earth’s biodiversity was not, as many assume, mostly completed in the 19th and 20th centuries.

RAF HOLMPTON RAF HOLMPTON 1952 to 2015 Updated 30th May 2015Use the links on this page forRAF HOLMPTON 1952 - 2014 A BRIEF HISTORYRAF HOLMPTON HISTORY RESOURCES RAF Holmpton's Magnificent Twin Level Operations Room in 1954 - (Sadly Removed 1960's) The Station started life in 1952 as a construction site and became operational as a 'Rotor' Radar Station in 1953 as No 336 Signals Unit operating various GCI - CHEL & HF Radars. The station consisted of a Domestic Camp located at Patrington Haven and a Technical site at Holmpton some 3 miles distant - The technical site at Holmpton housed an R3 Bunker comprising some 30,000sq ft of space set about 100ft below ground with the associated radars located directly above the bunker on a 36 acre secure site. By the late 60's Three massive new radars: Type 84, Type 85 & HSA were added 50 miles away at RAF Staxton Wold with the technical site at Holmpton remaining as the Command & Control Centre.

14 Google Tools You Didn't Know Existed Now that you've written your eulogies for Google Reader, it's a good time to remember that Google has an abundance of other resources that may not be as popular but still deserve a spotlight. We rounded up some lesser-known Google tools and applications that could help you cope with the loss of Reader and rekindle your love for Google. From fun tools like Google Ngram Viewer to useful resources like Full Value of Mobile Calculator, you'll find an array of tools for developers to small business owners to the average consumer.

Video Teaching and Video Films. ESL Teaching Videos Google + Students really enjoy watching movies and TV for a variety of reasons. For one, they get exposure to natural language in a non-threatening setting. Secondly, movies and video provide common ground to students of any international background.