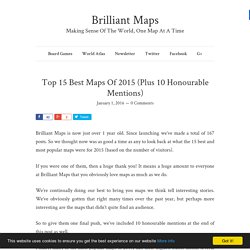 Since launching we’ve made a total of 167 posts. So we thought now was as good a time as any to look back at what the 15 best and most popular maps were for 2015 (based on the number of visitors). If you were one of them, then a huge thank you! It means a huge amount to everyone at Brilliant Maps that you obviously love maps as much as we do. We’re continually doing our best to bring you maps we think tell interesting stories. So to give them one final push, we’ve included 10 honourable mentions at the end of this post as well. Finally, many of the most popular maps of 2015, had their highest traffic month several months after the original post was made. So if you’ve shared any of our maps with a friend an extra special thank you to you!

15. Map created by reddit user scolbert08 Published On: April 21, 2015Most Popular Month: April Comments: A truly fascinating and nuanced look at religion around the world today. 14. 13. 12. 11. 10. 9. 8. 7. 6. 5. Primary School Spatial Thinking and GIS Activities. We receive many inquiries about how GIS and spatial thinking can be used with primary (elementary) aged students. 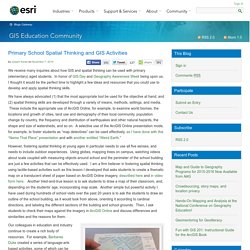 In honor of GIS Day and Geography Awareness Week being upon us, I thought it would be the perfect time to highlight a few ideas and resources that you could use to develop and apply spatial thinking skills. We have always advocated (1) that the most appropriate tool be used for the objective at hand; and (2) spatial thinking skills are developed through a variety of means, methods, settings, and media. These include the appropriate use of ArcGIS Online, for example, to examine world biomes, the locations and growth of cities, land use and demography of their local community, population change by country, the frequency and distribution of earthquakes and other natural hazards, the shape and size of watersheds, and so on.

However, fostering spatial thinking at young ages in particular needs to use all five senses, and needs to include outdoor experiences. Google Earth for Educators. Integrating Historical and Geographic Thinking. The following is a guest post by Michael Apfeldorf, a member of the Library’s education team. 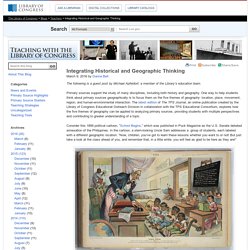 Primary sources support the study of many disciplines, including both history and geography. One way to help students think about primary sources geographically is to focus them on the five themes of geography: location, place, movement, region, and human-environmental interaction. The latest edition of The TPS Journal, an online publication created by the Library of Congress Educational Outreach Division in collaboration with the TPS Educational Consortium, explores how the five themes of geography can be applied to analyzing primary sources, providing students with multiple perspectives and contributing to greater understanding of a topic. Consider this 1899 political cartoon, “School Begins,” which was published in Puck Magazine as the U.S. Senate debated annexation of the Philippines. School begins, 1899 January 25 Thinking historically, students might reflect on questions such as: Proportional Pie Chart of the World’s Most Spoken Languages [2000x3261]

Graphic & Spatial Thinking. Map of South America. Map of Africa. Map of India. Click that ’hood! Map: African Pre-colonial Political Entities. The title of the original map in the Collins, et al., volume is "African States on the Eve of Partition: 1884. 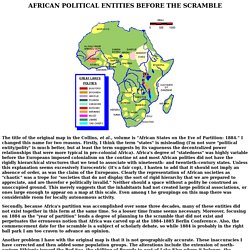 " I changed this name for two reasons. Firstly, I think the term "states" is misleading (I'm not sure "political entity/polity" is much better, but at least the term suggests by its vagueness the decentralized power relationships that were more typical in pre-colonial Africa). Africa's degree of "statedness" was highly variable before the Europeans imposed colonialism on the contine nt and most African polities did not have the rigidly hierarchical structures that we tend to associate with nineteenth- and twentieth-century states. Unless this explanation seems excessively Eurocentric (it's a fair cop), I hasten to add that it should not imply an absence of order, as was the claim of the Europeans.

Secondly, because Africa's partition was accomplished over some three decades, many of these entities did not exist together in this form at the same time. Natural Resources of Africa.