Round the World by Andrew Carnegie. Hills and the Sea by H. Belloc. Eight Hundred Leagues on the Amazon by Jules Verne - Full Text Free Book. Adventures and Letters by Richard Harding Davis - Full Text Free Book (Part 1/7) Celebrated Travels and Travellers by Jules Verne. Book of Pirates by Howard Pyle. Nd of Tortuga free from the obnoxious strangers, down upon Hispaniola they came, flushed with their easy victory, and determined to root out every Frenchman, until not one single buccaneer remained. 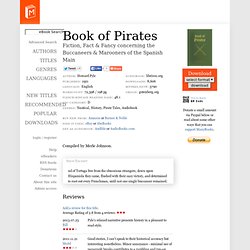 For a time they had an easy thing of it, for each French hunter roamed the woods by himself, with no better company than his half-wild dogs, so that when two or three Spaniards would meet such a one, he seldom if ever came out of the woods again, for even his resting place was lost. The Paris Sketch Book by William Makepeace Thackeray. Packages, love--twenty-seven packages,--and bring little Flo; where's little Flo? 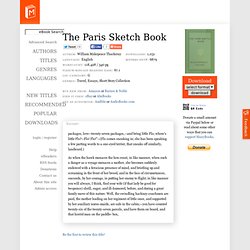 --Flo! Flo! "--(Flo comes sneaking in; she has been speaking a few parting words to a one-eyed terrier, that sneaks off similarly, landward.)

Sea, Poles or Oceania. Asia. Adventures in the Philippine Islands by Paul P. de La Gironière. To satisfy the wishes of my countrymen; it was a question of saving the lives of the crews of two vessels, and hesitation was impossible. 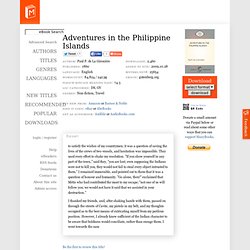 They used every effort to shake my resolution. "If you show yourself in any part of the town," said they, "you are lost; even supposing the Indians were not to kill you, they would not fail to steal every object intrusted to them. " I remained immovable, and pointed out to them that it was a question of honour and humanity. "Go alone, then! " exclaimed that Métis who had contributed the most to my escape; "not one of us will follow you; we would not have it said that we assisted in your destruction. " The Malay Archipelago, vol 1 by Alfred Russel Wallace. Ing the islands of Timor, Flores, Sumbawa, and Lombock, with several smaller ones. 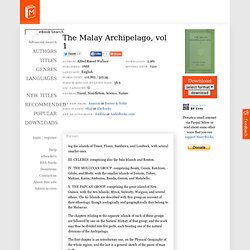 Africa. Queer Things About Egypt by Douglas Sladen. Sixty thousand words, and thereby curtailing the space indispensable for a description of the life and cities on the Nile, from the Sea to Assuan, was to generalise upon it in an introductory essay. 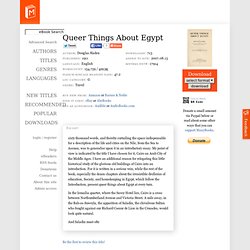 My point of view is indicated by the title I have chosen for it, Cairo an Arab City of the Middle Ages. I have an additional reason for relegating this little historical study of the glorious old buildings of Cairo into an introduction. The Albert N'Yanza, Great Basin of the Nile by Samuel White Baker. Him step by step along my rough path from the beginning to the end; through scorching deserts and thirsty sands; through swamp, and jungle, and interminable morass; through difficulties, fatigues, and sickness, until I bring him, faint with the wearying journey, to that high cliff where the great prize shall burst upon his view--from which he shall look down upon the vast ALBERT LAKE, and drink with me from the Sources of the Nile! 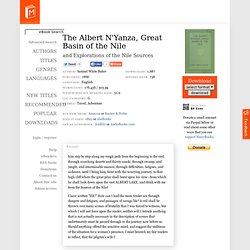 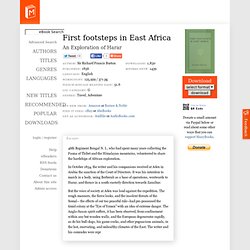 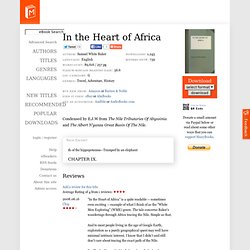 The tale concerns Baker's wanderings through Africa tracing the Nile. Simple as that. And to most people living in the age of Google Earth, exploration as a purely geographical quest may well have minimal intrinsic interest. I know that I didn't and still don't care about tracing the exact path of the Nile. But "In the Heart of Africa" also relates Baker's adventures while traveling, the people he met and animals he hunted. Like all examples of the WME genre, Baker's book frequently creates very mixed emotions.

But -- of course -- Baker's encounter with local people is colored by an ingrained sense of racial superiority, making it sometimes a bit depressing. Two Trips to Gorilla Land and the Cataracts of the Congo, vol 2 by Sir Richard Francis Burton. Tion by the second week in October. 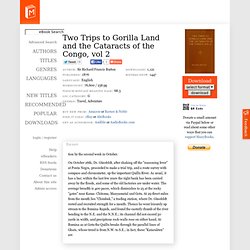 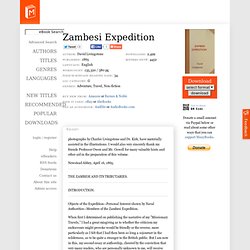 Kirk, have materially assisted in the illustrations. I would also very sincerely thank my friends Professor Owen and Mr. Oswell for many valuable hints and other aid in the preparation of this volume. In Morocco by Edith Wharton. There are other things to think about. At the first turn out of Tangier, Europe and the European disappear, and as soon as the motor begins to dip and rise over the arid little hills beyond to the last gardens one is sure that every figure on the road will be picturesque instead of prosaic, every garment graceful instead of grotesque.

One knows, too, that there will be no more omnibuses or trams or motorcyclists, but only long lines of camels rising up in brown friezes against the sky, little black donkeys trotting across the scrub under bulging pack-saddles, and noble draped figures walking beside them or majestically perching on their rumps. And for miles and miles there will be no more towns--only, at intervals on the naked slopes, circles of rush-roofed huts in a blue stockade of cactus, or a hundred or two nomad tents of black camel's hair resting on walls of wattled thorn and grouped about a terebinth-tree and a well. Through South Africa by Henry M. Stanley. Sh statesman had asked such a question, it must have been with the view of knowing--if diplomacy failed--what result would follow the final attempt to induce Kruger to listen to reason. From the shock this declaration from such a prominent Uitlander gave me and a colleague of mine, we understood what the feelings of the statesman referred to must have been, and we had no option left than to suppose the Uitlanders, despite all their clamour and affected indignation against the Transvaal Government, would prefer the Colonial Office to continue writing despatches than to take coercive measures.

It must be an immense relief to Englishmen all over the country, as well as it was to me, to know that we were not expected to be at the trouble and cost of sending troops, and we may all feel sure that as despatch-writing is considered to be so efficacious, the Colonial Office will not begrudge the labour nor spare expense in stationery. Tales of Lonely Trails by Zane Grey. Er into a widening space thick with cedars. It ended in a bare slope of smooth rock. Here we dismounted to begin the ascent. It was smooth and hard, though not slippery.

There was not a crack. I did not see a broken piece of stone. The Confidence-Man: His Masquerade by Herman Melville. "Poor fellow! " "Who can he be? " "Casper Hauser. " "Bless my soul! " "Uncommon countenance. " "Green prophet from Utah. " "Humbug! " "Singular innocence. " Following the Equator by Mark Twain. Erths in Sleepers--Elderly Ladies have Preference of Berths--An American Lady Takes One Anyhow--How Smythe Lost his Berth--How He Got Even--The Suttee. Adventures in Many Lands by Various Authors. Which he was reading slip into his soup.

Great Britain. Wild Wales by George Borrow. Mystic Isles of the South Seas. by Frederick O'Brien. Ay in a retired spot, brooding, apparently over his fate. He never smiled, though I who have been much in China, tried to stir him from his sadness by exclamations and gestures. His race has a very keen sense of humor. They see a thousand funny things about them, and laugh inwardly; but they never see anything amusing in themselves. A Tramp Abroad by Mark Twain. He hill, above the Castle. Adventures of a Young Naturalist by Lucien Biart. Fer not to think of you," he responded.

"You would rather, then, that I staid at Orizava? " "Oh no; I should like you to go, and--to go with you. " "What can you be thinking of? Abroad by Various Authors. Across the Equator by Thomas H. Reid.