UK trade. UK North-South Divide. The Monarchy. Map of Britain and Ireland in 620 AD. I asked friend & colleague @DapperHistorian a question about Birmingham, Eng. He told me, "it's just quite big." Um. No it isn't. *****Great Lakes surface area is almost exactly the same as area of the UK. And Scotland area = Lake… 27 things you'd never know about Britain if it wasn't for Ordnance Survey. 1885 map of occupations in England & Wales by county. Intriguing data, but somewhat dizzying to look at... Note all the herring off the east… Things aren’t always what they seem on the surface. 12,000 years ago Britain was connected to Europe until a tsunami from a submarine landsl…

Twitter. Vintage 1942 #map of resources in #UK looks so hip it could’ve been produced by a hipster 2017 designer! *****Controversial Cultural North-South Divide Map of England & Wales. Map created by reddit user atrainmadbrit The map above shows the “border” between North and South in England and Wales (Scotland is even further North) based on a 2007 study by the University of Sheffield. 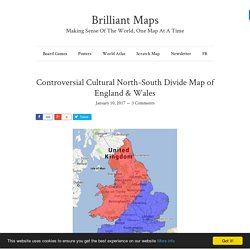 An 1856 map of the many different ethnic & cultural divisions of Britain. #r4today #Brexit Wanting free trade with 'the rest of the world' suggests that we make stuff the rest of the world wants to buy. The only map of Scotland you'll ever need. *****The North-South Divide according to @GreggsOfficial locations (take note, @dannydorling ;) #geography #inequality. The Anglo-Saxon Kingdoms, CA. 800. British Isles: Historic Counties. Animated #map morphs #UK by regional #GDP and highlights the importance of #London for national #economy. @galka_max. *****Nobody lives here #Population #UK. UK leads world in: - Books published per person - Largest TV broadcaster - Overseas territories - Oldest currency - Offshore wind energy. *****The UK: Building a picture / changing places /

Key Stage 2 teaching resources This module, comprising seven lessons or half a term's work, focusses on the UK. 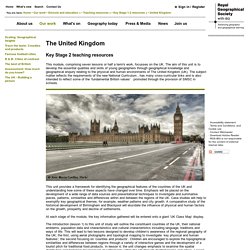 #Map explains which #geography #UK #GB etc refers too. I sometimes say GB when I mean UK. Sorry :) *****UK GB political geography map explainer: Here is a better #map explaining the nomenclature of the #geography of all those islands north of France (not sure if I can say Britain...) The 13 unhappiest places to live in Britain. Wikicommons/Tanya Dedyukhina The top 13 unhappiest places to live in Britain are all in England. 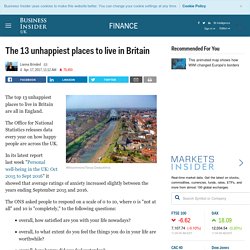 The Office for National Statistics releases data every year on how happy people are across the UK. In its latest report last week "Personal well-being in the UK: Oct 2015 to Sept 2016" it showed that average ratings of anxiety increased slightly between the years ending September 2015 and 2016. The ONS asked people to respond on a scale of 0 to 10, where 0 is "not at all" and 10 is "completely," to the following questions: overall, how satisfied are you with your life nowadays?

From there, the ONS produced estimates of the mean ratings for all 4 personal well-being questions. "At a time when economic measures are generally improving, this is not necessarily reflected in how people tell us they are feeling about their lives," said Matthew Steel, a statistician at the Office for National Statistics. *****The true shape of the UK economy (size = share of UK GDP) The legend of Owain Glyndwr (part 1 of 8) 12 April 1606. The flags of St George & Andrew plus the Cross of St Patrick, which was added in 1801, became the official union flag.

*****12 Maps That Will Change The Way You Look At Scotland. #Map shows that population of #Scotland comfortably fits into #London. Good to know. *****Not many wild beasts around Salisbury now...(also Canterbury) *****Union flag: 28 March 1800. Irish Parliament passed the Act of Union with England (took effect 1 Jan 1801. It created UK of Great Britain and Ireland. *****1982: Nationwide visited Central Scotland's answer to Silicon Valley, Silicon Glen. Technically it isn't a glen... 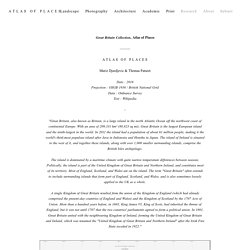 With an area of 209,331 km² (80,823 sq mi), Great Britain is the largest European island and the ninth-largest in the world. In 2011 the island had a population of about 61 million people, making it the world's third-most populous island after Java in Indonesia and Honshu in Japan. The island is dominated by a maritime climate with quite narrow temperature differences between seasons. The British Isles explained in one chart. The absurdly confusing lands of the British Crown, explained in 1 chart. US states overlaid on areas of Europe with equal population Source: Reddit User Speech500. ***UK areas w popn equal to London. Kennington Barlow via Chuffing Cross: the northern Northern line. Japan, New Zealand and UK Size Comparison #Japan #NewZealand #Sizecomparisonmaps #UK. Animated #map morphs #UK by regional #GDP and highlights the importance of #London for national #economy. @galka_max. Population density. The one thing each UK county leads in.

Welsh women at tea c. 1905. London labour & the London poor is sad reading but intrigued by cluster of female “criminals” along Welsh border. #OTD 1937: John Hume was born. The Nobel Laureate, civil rights leader and architect of the Northern Ireland peace process is 80 today. Twitter. 1000+ images about Stamps A-Z on Pinterest. Maps. I think it is disrespectful King Harold II to leave his ancestral lands in Sussex outside the province of Wessex. ***Interactive UK statistics. We’re always looking for new ways to bring statistics to light and so we’ve assembled a list of highlights of the past year, from tools to aid understanding of the EU referendum debate, to issues like migration, unpaid work and the gender pay gap. 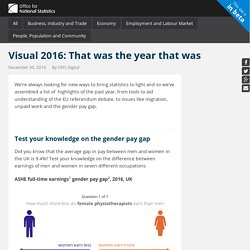 Test your knowledge on the gender pay gap Did you know that the average gap in pay between men and women in the UK is 9.4%? Test your knowledge on the difference between earnings of men and women in seven different occupations ASHE full-time earnings gender pay gap, 2016, UK Baby Names – how popular is yours? Find out using our interactive graphic that shows the top 100 names for baby boys and girls in England and Wales for every ten years between 1904 and 1994 and for each year from 1996 onwards.

What’s the best time for a wedding? Did you know that on average there were 508 weddings on 30th December between 1995 and 2013 (the most recent data available)? We put together two innovative ways to visualise and understand wedding data. The United Kingdom takes pride in Scotland’s success. I wish everyone in the UK and across the world a very happy #StAndrewsDay. Birthplace of English Monarchs since William the Conqueror - Zoomable Image. Love this photo of the ferry heading into Ardrossan. Captured wonderfully by William McKnight. #SaveOurFerry. 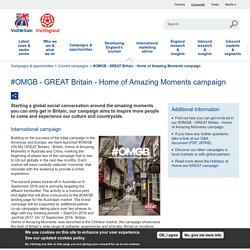 Each market will have carefully selected ‘moments’ that resonate with the audience to provide a richer experience. The second phase kicked off in Australia on 9 September 2016 and is primarily targeting the affluent trendsetter. The activity is a mixture print and digital that will drive consumers to the #OMGB landing page for the Australian market. The brand campaign will be supported by additional partner co-op campaigns taking place over two phases to align with key booking periods – Sept/Oct 2016 and Jan/Feb 2017.

Domestic campaign We have launched our largest domestic marketing campaign for 2016, the ‘Home of Amazing Moments.’ Locate That Landmark Game. Higher than Ben Nevis (the highest point in the UK) 12 data maps that sum up London. Image copyright James Cheshire/Oliver Uberti A new collection of data maps of London reveals a city heaving with information. 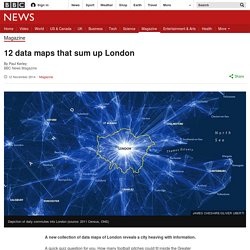 A quick quiz question for you. How many football pitches could fit inside the Greater London boundary? Well, 220,000 of them would fill the space between Cockfosters and Croydon, Heathrow and Hornchurch. UK coastline.. which country is due east/west? — Steven Kay aka stevefaeembra. England vs Great Britain vs United Kingdom Explained. Venn Diagram Map created by Anna Debenham The map above demonstrates the difference between the British Isles, United Kingdom, Great Britain, and England. 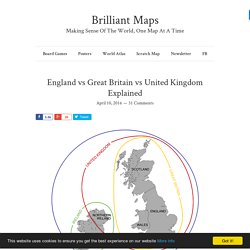 While the terms are often used interchangeably they actually mean different things.