Online Map of the World. Chinese provinces vs countries. USA. Africa. Africa is divided by the Sahara Desert, which stretches west to east just below the top of the continent. 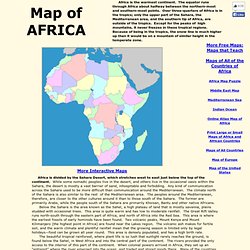 While some nomadic peoples live in the desert, and others live in the occasional oasis within the Sahara, the desert is mostly a vast barrier of sand, inhospitable and forbidding. Any kind of communication across the Sahara used to be more difficult than communication around the Mediterranean. The climate north of the Sahara is also similar to the rest of the Mediterranean area. The peoples around the Mediterranean, therefore, are closer to the other cultures around it than to those south of the Sahara. The former are primarily Arabs, while the people south of the Sahara are primarily Khoisan, Bantu and other native Africans. Below the Sahara is the area known as the Sahel, a high plateau of land that is mostly savanna, plains studded with occasional trees.

The Nile river flows north through the Sahara on the eastern edge of Africa. Senegal and the Gambia: "Congo": Cote d'Ivoire: Europe. Europe is the second smallest of the inhabited continents. 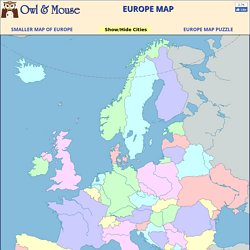 It is a part of the Eurasian land mass that includes Europe, Asia, Asia Minor and the Arabian Peninsula. As many large islands east and south of Asia are usually included in Asia, the Eurasian land mass extends from Iceland to New Guinea, from the Atlantic to the Pacific and from the Arctic to the Indian Oceans. Just where to divide this mass into continents has long been debated. Traditionally the Ural mountains in Russia have been used as a division. This line then had to curve back through the Caspian and Black Seas to avoid leaving Turkey in Europe. Asia. Asia is the largest continent, both in land area and in population. 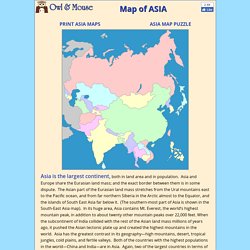 Asia and Europe share the Eurasian land mass; and the exact border between them is in some dispute. The Asian part of the Eurasian land mass stretches from the Ural mountains east to the Pacific ocean, and from far northern Siberia in the Arctic almost to the Equator, and the islands of South East Asia far below it. (The southern-most part of Asia is shown in the South-East Asia map). In its huge area, Asia contains Mt. Middle East. China Provinces. Canada. Mexico. Southeast Asia & Australia. South America. South America extends from north of the equator almost to Antarctica. 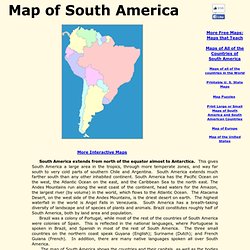 This gives South America a large area in the tropics, through more temperate zones, and way far south to very cold parts of southern Chile and Argentina. South America extends much farther south than any other inhabited continent.