Escape Colorado provides hand-on geography lesson - Journal Advocate. Fourth grade students at Campbell Elementary work to put together a puzzle and answer the puzzle's question to find another clue about where their missing teacher is located during an Escape Colorado activity Friday. 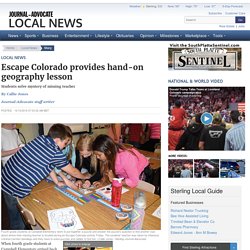 The students' teacher was taken by infamous criminal Carmen Sandiego and they have to solve puzzles and riddles to find her. Who Actually Owns Antarctica? Highland Middle School seventh-graders to start ‘Geocaching’ in geography class. World's Largest Canyon Could Be Under Antarctic Ice. And you thought that gazing over the edge of the Grand Canyon was spectacular. 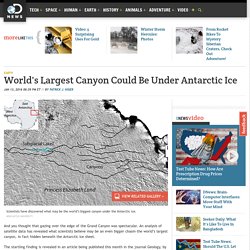 An analysis of satellite data has revealed what scientists believe may be an even bigger chasm–the world’s largest canyon, in fact–hidden beneath the Antarctic ice sheet. The startling finding is revealed in an article being published this month in the journal Geology, by a team that includes researchers from the UK’s Dunham and Newcastle universities and Imperial College London. Chronicling America. Students practice geography with classroom 1,000 miles away. Geography Education News. Elephant Rock, Iceland. 10 Things You Didn’t Know About the Dead Sea. The Dead Sea, also known as the Salt Sea, is a salt lake bordering Jordan to the east and Israel and the West Bank to the west. 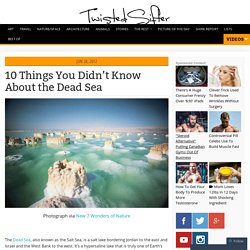 It’s a hypersaline lake that is truly one of Earth’s unique places. Below you will find ten interesting facts along with a gallery of picture of this fascinating place. All information below via Wikipedia, enjoy! 1. The surface and shores of the Dead Sea are 423 metres (1,388 ft) below sea level, making it Earth’s lowest elevation on land. 2. 3. 4. 5. 6. Technology in the Classroom: How to Make Geography Fun. One of the hardest challenges for teachers is how to use technology in the classroom to engage students in core subjects such as geography. 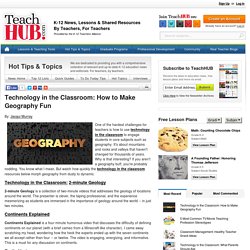 It's about mountains and rocks and valleys that haven't changed for thousands of years. Why is that interesting? If you aren't a geography buff, you're probably nodding. This Amazing Visualization Shows How We Got to 7 Billion People on Earth. Everything you ever wanted to know about the U.S. foreign assistance budget - Washington Post. Promoting Geography Awareness. I’m not usually one to brag, but one of my proudest accomplishments in life is winning the National Geographic Bee at my school as an eighth grader. 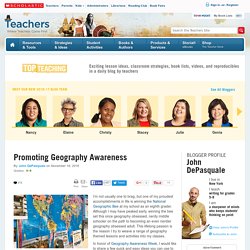 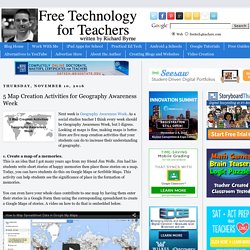 As a social studies teacher I think every week should be Geography Awareness Week, but I digress. Looking at maps is fine, making maps is better. Here are five map creation activities that your students can do to increase their understanding of geography. 1. Create a map of a memories. You can even have your whole class contribute to one map by having them enter their stories in a Google Form then using the corresponding spreadsheet to create a Google Maps of stories. 2. Mission Map Quest, developed by Russel Tarr, is a map-based tool for creating virtual treasure hunts. 4. Geography Timeline: 13 Key Moments That Changed U.S. Boundaries. 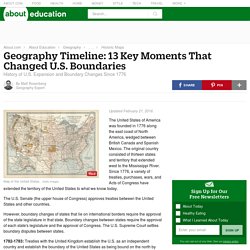 The United States of America was founded in 1776 along the east coast of North America, wedged between British Canada and Spanish Mexico. The original country consisted of thirteen states and territory that extended west to the Mississippi River. Since 1776, a variety of treaties, purchases, wars, and Acts of Congress have extended the territory of the United States to what we know today. Maps. A stunning map shows how living on America’s coasts really is so different. You probably know that New York City is an expensive place to live. 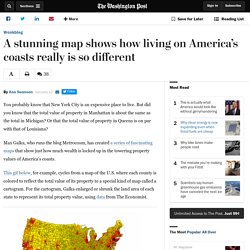 MAPS OF THE WORLD. Barefoot World Atlas App for Research and Exploration. The days of flipping through an encyclopedia and atlas are over in most classrooms. 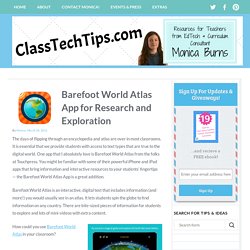 It is essential that we provide students with access to text types that are true to the digital world. One app that I absolutely love is Barefoot World Atlas from the folks at Touchpress. You might be familiar with some of their powerful iPhone and iPad apps that bring information and interactive resources to your students’ fingertips — the Barefoot World Atlas App is a great addition. 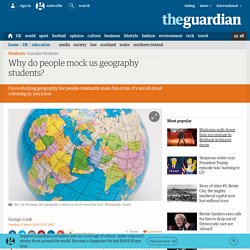 For years I’ve experienced jibes, sarcastic comments and mockery for the fact I like geography, but I didn’t think it would carry on at university. My friends and I have heard all the digs, from: “where are your colouring pencils?” Of Hyperbole And Geography: A Map Of The World's 'Other' Capitals. To be named "world capital" of something is both a badge of honor, yet also something of a badge of shame, writer George Pendle tells NPR's Robert Siegel. It means your city revolves entirely around a single product, like gravel or toothpicks. Pendle should know: He's reported on a series of random but rather amusing list of "Other Capitals of the World" for Atlas Obscura — not the capitals of countries but of products, games and states of mind.

Here's a list of some that made us chuckle. The Toilet Paper Capital Of The World: Green Bay, Wis. "Up until the early 20th century, there was some toilet paper, but it had a devastating problem: the paper had splinters in it. The Carpet *And* Former Bedspread Capital Of The World: Dalton, Ga. 22 Maps That Show The Deepest Linguistic Conflicts In America - Business Insider. Mapping 65 Years of Explosive Urban Growth Around the World. In 1950, only 30 percent of the world’s population lived in cities, compared with 54 percent in 2015. A new map by urban geographer Duncan Smith tracks the bursts in city populations that contributed to this growth.

Here’s Smith on the implication of global urbanization patterns, in a guide to his interactive data viz: Our increasingly urban world now frames many of society’s greatest challenges. From global equality to health, education, prosperity and, not least, sustainability, solutions need to be interwoven with fostering livable, efficient and inclusive cities. In its 2014 World Urbanization Prospects report, the UN tracked the populations of major cities from 1950 to 2014, then predicted how these populations would grow (or shrink) up to the year 2030.

The result is a delightfully user-friendly map of urban trajectories. Much urban growth in the 21st century has been driven by Asia, which now houses 53 percent of the world’s urban population. Half the World Lives on 1% of Its Land, Mapped. The people of Earth really love their cities. In the simple map above lies a stark spatial imbalance: half the people in the world cram into just 1 percent of the Earth’s surface (in yellow), and the other half sprawl across the remaining 99 percent (in black). Data viz extraordinaire Max Galka created this map using NASA’s gridded population data, which counts the global population within each nine-square-mile patch of Earth, instead of within each each district, state, or country border. Map creator online to make a map with multiple locations and regions. Make Maps Online with Click2Map.

Draw On Maps and Make Them Easily.