How does geography effect economy

Geography and Economic Development. World Geography - Economic Geography - Globalization. Geography. Answers - How does geography affect the economy of Asian countries? What Actually Affects the Economic and Political Outcomes of Countries? – InfoRefuge.com. How does a country become rich? 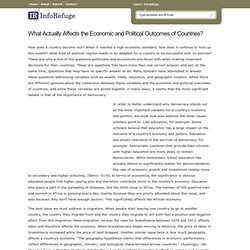 When it reaches a high economic standard, how does it continue to hold up this wealth? What kind of political regime needs to be adapted for a country to be successful with its policies? Japan Economy - What Is the Economy in Japan - How Does Japan's Economy Affect the Global Economy. Updated August 28, 2013 Before Japan's 2011 earthquake and nuclear power plant disaster, its economy was emerging from the deepest recession since the 1970s. 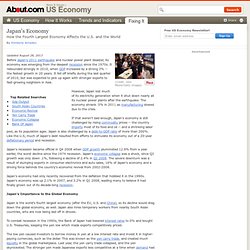 It rebounded strongly in 2010, when GDP increased by a strong 3% -- the fastest growth in 20 years. It fell off briefly during the last quarter of 2010, but was expected to pick up again with stronger exports to fast-growing neighbors in Asia. How is economy affected by geography. How does u.s. geography affect u.s. economy.