OTD 5 years ago we 3 met to devise Rowan's bit of the 2012 Games opening ceremony. We took a silly photo. The 'Tokyo 2020 medal project' turns mobiles from across Japan into medals,starting from April 1st! #GreenMedals2020. STUB -the stump of a tree or plant. "Ye'll find a pretty many stubs about when ye gets into de wood. Ye must look where ye be goin'." Rio's Olympic legacy: six months on, how has the city fared? It’s been over six months since the Olympic games came to a close in Rio. 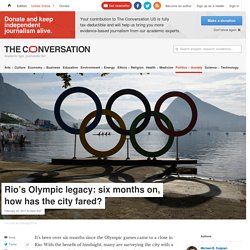 With the benefit of hindsight, many are surveying the city with a critical eye, wondering whether the multi-billion dollar mega-event was “worth it”. When a city is graced by the pinnacle of cultural and sporting celebration that is the Olympic Games, it also carries out a programme of ambitious urban development: from short-term regeneration to longer-term infrastructure works. Since the start of the century, such non-sporting outcomes have become a major part of the bidding process for would-be host cities. Today, a bid to host the Olympics can provide a powerful political will for change, pool public and private money together in enormous funds, and catalyse urban development at an astounding rate.

Mixed visions Yet event-led policies are complex. Rio’s favelas offer a case in point. Venues remain without owners, part-functioning or in complete disarray. Stratford: then and now - Stratford before the Olympics - Time Out London. It cost £9 billion to bring the Olympic Games to Stratford, and despite years of public apprehension, London’s reaction was unanimous and emphatic: it was so worth it. 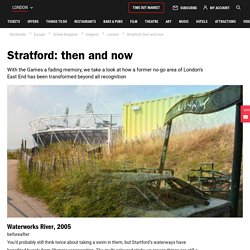 With the Games long since over and the Olympic site in full-on Legacy Mode, we thought it was high time we took a closer look at how those Olympic millions have turned one of London’s most deprived areas into a shiny new postcode to be proud of. Drag the slider handles from side to side to compare old and new, and share your favourite Stratford memories in the comments box below. 'Fridge Mountain', 2006. ***Stratford rebranding: International Quarter London the future is heading east. Theconversation. A sad view of Rio's Olympic legacy, just 6 months later #geographyteacher. 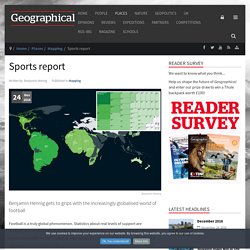 Statistics about real levels of support are problematic, but there are estimates of up to 3.5 billion fans of football globally. A study conducted in 2006 by the Fédération Internationale de Football Association (FIFA), which represents 211 members as the global governing body of football, estimated 270 million people being active in the sport worldwide. FIFA’s data give a rough idea of football’s global importance and distribution. From the statistics published, Asia emerged as the biggest player with 85 million footballers. Europe had 62 million, Africa 46 million, North and Central America had 43 million, South America 27 million, and Oceania 0.5 million. Largest Football Stadium Capacity in Europe (Map) We’re obsessed with the topic of football stadium capacity and to indulge our curiosity we’ve trawled around Europe to find the largest football stadium in each country. 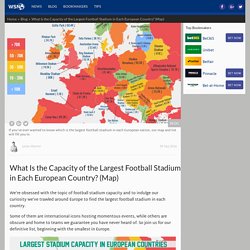 Some of them are international icons hosting momentous events, while others are obscure and home to teams we guarantee you have never heard of. A 17 year-old Pelé in Sweden before the start of the 1958 World Cup. Ailsa Craig is the major supplier of a rare type of micro-granite which is used to curling stones. Eric and Ernie On The Ball... @MemorabiliaMall @FootballArchive @footballmemorys. Love this infographic that I spied in my presentation space at #pracped16. 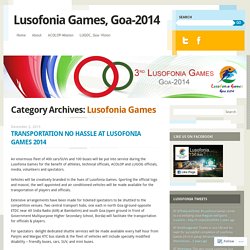 The following article is extracted and translated from the official ACOLOP website, Article Link: The General Assembly ACOLOP met on 10th May in Goa, India. The Assembly was being attended by representatives of the Olympic Committees of Angola, Brazil, Cape Verde, Goa, India, Macau, China, Mozambique, Portugal, Sao Tome and Principe and Sri Lanka. During the Assembly, the annual report and financial report for 2012 was approved, and also the report of activities and budget for the year 2013 ACOLOP was discussed and approved.

Football in Turkey? Just like ours, apart from the corners (via @TSF) Leaving a Legacy: Mega-Sporting Events - World Forum on Sport and Culture; Co-Creation, Co-Growth for Tokyo 2020 and Beyond. National Sports Campus. TOBIN Consulting Engineerrs are proud of our continued involvement on the National Sports Campus project in Abbotsown, Co. 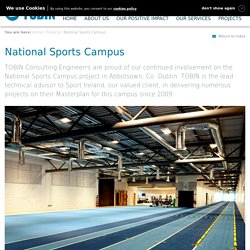 Dublin. TOBIN is the lead technical advisor to Sport Ireland, our valued client, in delivering numerous projects on their Masterplan for this campus since 2009. This landmark project involves the development of external sports facilities including natural grass and synthetic pitches with ancillary fencing and floodlighting. It also includes large scale building sports facilities including indoor athletic tracks, indoor courts, gyms, changing rooms and spectator accommodation. 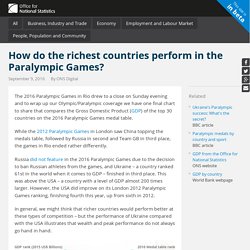 While the 2012 Paralympic Games in London saw China topping the medals table, followed by Russia in second and Team GB in third place, the games in Rio ended rather differently. Russia did not feature in the 2016 Paralympic Games due to the decision to ban Russian athletes from the games, and Ukraine – a country ranked 61st in the world when it comes to GDP – finished in third place. This was above the USA – a country with a level of GDP almost 200 times larger. However, the USA did improve on its London 2012 Paralympic Games ranking, finishing fourth this year, up from sixth in 2012. Well played Hamburg. A great idea to motivate people to exercise by using the stairs rather than the escalators. Scenes from football history, 301 ~ Lone Ranger.

Heating up the Games: Why the British Isles could be the only viable Olympic hosts. Only four Northern hemisphere cities are likely to be cool enough to host the summer Olympic and Paralympic Games by 2100 – Belfast, Dublin, Edinburgh and Glasgow Tropical Rio de Janeiro is in the middle of an Olympic-Paralympic Games festival of sport, with Tokyo primed to take over in 2020, and Paris, Los Angeles, and Budapest jostling over who gets to host the Games four years after that (Rome is also technically in the running but nobody expects its bid to survive much longer if the new mayor sticks to her election promises). 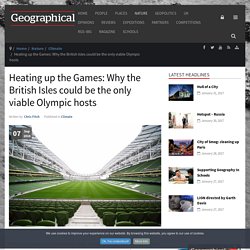 But a warming climate suggests that sites for future Olympics will be significantly more restricted. Summary of all 645 northern hemisphere cities in 2085 capable of mounting the Summer Olympics. Bar charts organise the number of cities in each region by whether their estimated summer WBGT will put them at low (~5 per cent globally), medium (~7 per cent), or high (~88 per cent) risk (Image: Smith et al.) US OPEN TENNIS. Climate change could have a major impact on future Olympic Games. This is why.

By 2085, only eight Northern Hemisphere cities outside of western Europe are likely to be cool enough to host the summer Olympic games, predict researchers. 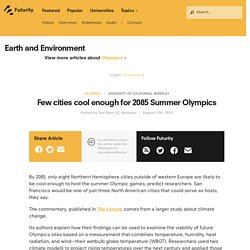 San Francisco would be one of just three North American cities that could serve as hosts, they say. Its authors explain how their findings can be used to examine the viability of future Olympics sites based on a measurement that combines temperature, humidity, heat radiation, and wind—their wetbulb globe temperature (WBGT). Researchers used two climate models to project rising temperatures over the next century and applied those results to current safety procedures used in determining the viability of a host city. The final study, which is still forthcoming and holds much broader implications than the future of outdoor Olympics, examines the relationship between health and productivity as the global climate continues to warm. Canceled marathons. Rio Olympics 2016: Participants and All-Time Medals - Views of the World.

Rio 2016, this year’s Summer Olympic Games are about to start. 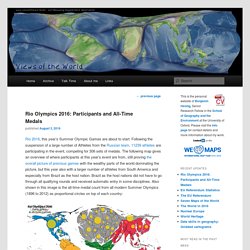 Following the suspension of a large number of Athletes from the Russian team, 11239 athletes are participating in the event, competing for 306 sets of medals. The following map gives an overview of where participants at this year’s event are from, still proving the overall picture of previous games with the wealthy parts of the world dominating the picture, but this year also with a larger number of athletes from South America and especially from Brazil as the host nation. Brazil as the host nations did not have to go through all qualifying rounds and received automatic entry in some disciplines. Also shown in this image is the all-time medal count from all modern Summer Olympics (1896 to 2012) as proportional circles on top of each country: (click for larger version)

Who Won in Rio: Bloomberg’s Olympic Medal Tracker. Watch Rio build its 2016 Summer Olympic sites from the space. Predicting the Rio Olympic medal table. Image copyright Getty Images The Rio Olympics have yet to start, but of one thing we can be confident - the US and China will top the medals table when it's all over on Sunday 21 August. But why are they always so successful? And can we predict which other countries will do well this year? In terms of the overall medals won, the US, China and Russia can be relied on to top the list. It was like this in 2012, 2008 and 2004, though in 2000 China tied for third place with the host nation, Australia.

Usain Bolt and the Fastest Men in the World Since 1896 – on the Same Track. Advice on dealing with pressure from a sports psychologist who trains Olympians. Don't blame them. Utter exploitation. Team GB’s Olympic success: five factors behind their Rio medal rush. 1) The National Lottery It’s unlikely Max Whitlock was thinking of Sir John Major, the former Conservative prime minister, as he stood on the podium on Sunday as Britain’s first gymnastics gold medalist.

But it was Major who decided, after the humiliation in Atlanta when Britain came home 36th in the medal table, beneath Kazakhstan for example, with one gold, to divert National Lottery funding into elite sport. Britain's Olympians - But Where Are They From? - Hopewiser UK. A contagious epidemic is at large in GB right now. Symptoms include goosebumps, a righteous sense of pride in one's nationality and an itching sensation that can only be cured by dusting off the old running boots. You've guessed it, Olympic fever is well and truly in full swing. Can data predict the winner of Euro 2016? Reuters/Eddie Keogh Goldman Sachs' economic research team circulated a note over the weekend predicting the results of the UEFA European Championship, which begins on Friday night in Paris. Goldman is backing host nation France to win the tournament, saying that its models suggest the French team has a 23.1% chance of victory, compared to 19.9% for 2014 World Cup winners Germany.

Coming in third place are current holders Spain, with a 13.6% chance. Perhaps a little surprisingly for British fans, England is seen as the fourth most likely to win, with a 10.5% chance of doing so. How many England internationals have been born in your area? Alternative Olympics medal table. Alternative Olympics medal table. Olympics 2016: Live medal map. Oxford Olympics Study 2016: Cost ans cost overrun.