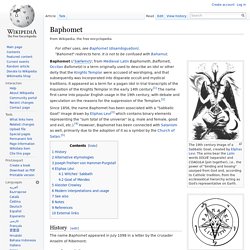 It is not to be confused with Bahamut. The 19th century image of a Sabbatic Goat, created by Eliphas Levi. The arms bear the Latin words SOLVE (separate) and COAGULA (join together), i.e., the power of "binding and loosing" usurped from God and, according to Catholic tradition, from the ecclesiastical hierarchy acting as God's representative on Earth.

The original goat pentagram first appeared in the book "La Clef de la Magie Noire" by French occultist Stanislas de Guaita, in 1897. This symbol would later become synonymous with Baphomet, and is commonly referred to as the Goat of Mendes or Sabbatic Goat. Baphomet (/ˈbæfɵmɛt/; from Medieval Latin Baphometh, Baffometi, Occitan Bafometz) is a term originally used to describe an idol or other deity that the Knights Templar were accused of worshiping, and that subsequently was incorporated into disparate occult and mystical traditions. §History[edit] The name Baphomet comes up in several of these confessions. Secret Teachings of All Ages: The Cross and the Crucifixion. Sacred Texts Esoteric Index Previous Next p. 181 ONE of the most interesting legends concerning the cross is that preserved in Aurea Legenda, by Jacobus de Vorgaine. 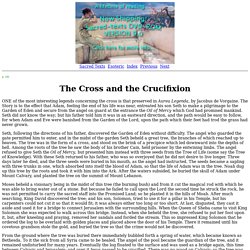 The Story is to the effect that Adam, feeling the end of his life was near, entreated his son Seth to make a pilgrimage to the Garden of Eden and secure from the angel on guard at the entrance the Oil of Mercy which God had promised mankind. Seth did not know the way; but his father told him it was in an eastward direction, and the path would be easy to follow, for when Adam and Eve were banished from the Garden of the Lord, upon the path which their feet had trod the grass had never grown. Seth, following the directions of his father, discovered the Garden of Eden without difficulty. Moses beheld a visionary being in the midst of this tree (the burning bush) and from it cut the magical rod with which he was able to bring water out of a stone. Concerning this, H. The Tau (or T-shaped) Cross: Hopi-Maya-Egyptian Connections. By Gary A. 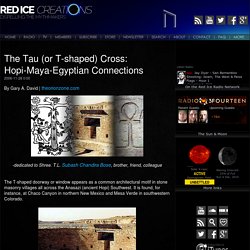 David | theorionzone.com The T-shaped doorway or window appears as a common architectural motif in stone masonry villages all across the Anasazi (ancient Hopi) Southwest. It is found, for instance, at Chaco Canyon in northern New Mexico and Mesa Verde in southwestern Colorado. Steps leading through a T-shaped doorway down into Casa Rinconada, the Great Kiva at Chaco Canyon, New Mexico. Cross Symbol *** The Cross SymbolNative American Indians were a deeply spiritual people and they communicated their history, thoughts, ideas and dreams from generation to generation through Symbols and Signs such as the Cross symbol. 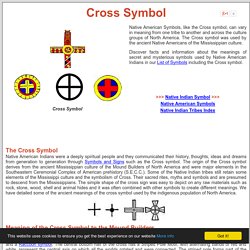 The origin of the Cross symbol derives from the ancient Mississippian culture of the Mound Builders of North America and were major elements in the Southeastern Ceremonial Complex of American prehistory (S.E.C.C.). Some of the Native Indian tribes still retain some elements of the Mississippi culture and the symbolism of Cross. Their sacred rites, myths and symbols and are presumed to descend from the Mississippians. The simple shape of the cross sign was easy to depict on any raw materials such as rock, stone, wood, shell and animal hides and it was often combined with other symbols to create different meanings. 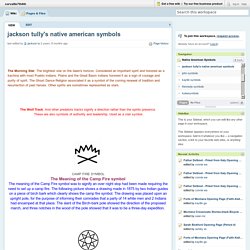 The brightest star on the dawn's horizon. Considered an important spirit and honored as a kachina with most Pueblo Indians. 500+ Occult Symbols and Esoteric Designs - Vector Collection. Download the ultimate, hand-drawn, esoteric and occult vector illustration collection. 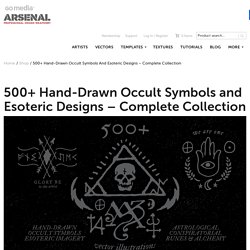 It includes over 500 vector symbols, icons, drawings, and illustrations created in the same hand-drawn style so they all work together to create an unlimited variety of designs. Great for band shirts, gigposters, album artwork, and other works of art. In the mood to create something that looks ancient and old-world? Check. What about something conspiratorial?

*Font used in images is IM Fell Types: How to Use: Follow this Step-by-Step Tutorial This collection includes all of the following: Total: 573 images These are best used with Adobe Illustrator CS5 or higher or comparable vector editing software.