The Genealogy from Adam to Jesus Christ 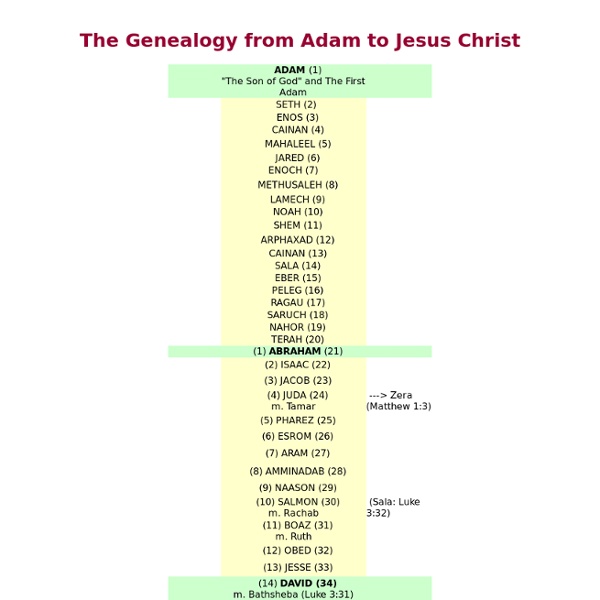 Quotes from Starbucks - Influential Mom Blogger, Parenting, Community 10K Amazing Shares Facebook 3 Pin It Share 7 7 Twitter 0 Google+ 12 StumbleUpon 10K Email -- Email to a friend 10K Amazing Shares × Wisdom from a cup of coffee….. Don't pray for money! - Richmond Christian Education Money is the first thing most people pray for when they are in need; however, people should not pray for money. There were several wealthy people in the Bible, but we read nothing about any one of them praying for money. Solomon prayed for wisdom and God gave him wisdom and riches, but neither Solomon nor Job nor Abraham nor Joseph ever prayed for money, wealth or riches and neither should we. Here is why we should never pray for money. When we pray for money and get it, we recylce it in some way. When we pray for money we never keep it. When we pray for money we are praying for the secondary thing instead of the primary thing that we want. Why shouldn't we pray for money? This question was posed to students in the New Testament course at The Way of Life Bible institute in Richmond, Virginia. Frederick said, "We shouldn't pray for money because the Bible says, 'The love of money is the root of all evil.' Dease said, "God is our source, and He will provide our needs.

Heike Weber Installations | bumbumbum - StumbleUpon Utterly amazing installations by Heike Weber. She draws with permanentmarkers on acrylic floor and walls – surfaces that have reached up to 600 m2. I can’t begin to imagine how time consuming these breathtaking installations must have been. Via TRIANGULATION Passive-Aggressive Note of the Day 5 Freewriting Secrets for Being a &Genius& | Psychology Today - StumbleUpon You've heard of freewriting, certainly. At its most basic, it's about forcing your internal editor to stay away while you splash your most raw and unusual thoughts onto the page. In Accidental Genius: Using Writing to Generate Your Best Ideas, Insights, and Content (2nd edition, revised & updated), Mark Levy tells how he uses freewriting, not only to loosen up his writing muscles, but to solve business problems of all kinds. Levy, author, writing teacher, and marketing strategist, shares a few "secrets" for making freewriting an indispensible tool: 5 Freewriting Tips 1. 2. 3. 4. 5. Levy elaborates on each of those tips, and many more, using anecdotes from many realms. Copyright (c) 2010 by Susan K.

Various quotations | #222 In From up North’s inspiration galleries we present the latest of our findings from the wonderful world of design. Amazing high quality artworks in various categories from great designers all over the globe. Quote by George Bernard Being happy… Sometimes I pretend to be normal… 10 Best Places to Live for Escaping World Conflict | Expatify - StumbleUpon Where would you be the safest if World War 3 broke out tomorrow? Perhaps it’s a grim subject, but safety and distance from world conflict can be a motivating factor in your choice to expatriate. At the very least, conflict around the world can weigh heavy on the soul, and it’s nice to know there are some places still left in the world where you might be left in peace. 10. Switzerland’s long history of neutrality and its tucked away location among the valleys of the Alps still make it a safe bet, even despite having a high number of bordering nations. 9. Costa Rica has a stable democracy, a disbanded military and a national policy of neutrality. 8. There are regions of Papua New Guinea that are still being discovered for the first time. 7. Canada is the second largest nation in the world, yet it only shares a land border with one other country– the U.S.A.– and it is a peaceful border. 6. 5. 4. 3. 2. 1. Comments

25 Reasons Why You Should Dress Up Every Day Photo Credits: 1, 2, 3, 4 A few weeks ago, a reader left a comment that made me think about the things we wear every day and why we wear them. She was asking for advice on what to do when people ask “why are YOU so dressed up?” That comment got me thinking about dressing up and what that means. Since when did it become an unusual thing to put effort into what you wear and have fun with fashion? I was immediately inspired to create this list. So why dress up? Because life’s too short to blend in. Because you’re only young once. Because fashion is a method of self expression. Because you never know who you’ll run into. Because it obviously annoys some people (like the guy who asks why YOU are so dressed up). Because you never know, there’s always a chance you could get snapped by The Sartorialist (or maybe the girls over at Street Spotted)! Because you deserve to look your best at all times. Because you’ll never improve your sense of style if your default look is “I give up”.

Inspirational Quotes - Celebrities, Kids Clothing, Influential Mom Blogger 584.3K Amazing Shares Facebook 4 Pin It Share 148 148 Twitter 25 Google+ 12 StumbleUpon 584.1K Email -- Email to a friend 584.3K Amazing Shares × Hello! It’s me Alison again from Being Alison! I also do Quotes every Friday so if you want to check out what I’ve done in the past I won’t mind you stopping in! It is possible to understand Engineers - Where there's a will, there's a way. Understanding Engineers #1 Two engineering students were biking across a university campus when one said, "Where did you get such a great bike?" The second engineer replied, "Well, I was walking along yesterday, minding my own business, when a beautiful woman rode up on this bike, threw it to the ground, took off all her clothes and said, "Take what you want." The first engineer nodded approvingly and said, "Good choice, The clothes probably wouldn't have fit you anyway." Understanding Engineers #2 To the optimist, the glass is half-full. To the engineer, the glass is twice as big as it needs to be. Understanding Engineers #3 A priest, an ophthalmologist, and an engineer were golfing one morning behind a particularly slow group of golfers. The engineer fumed, "What's with those guys? The doctor chimed in,"I don't know, but I've never seen such inept golf!" The priest said, "Here comes the greens keeper. He said, "Hello, George. The greens keeper replied, "Oh, yes. They were silent for a moment.

How To Treat Others: 5 Lessons From an Unknown Author Five Lessons About How To Treat People -- Author Unknown 1. First Important Lesson - "Know The Cleaning Lady" During my second month of college, our professor gave us a pop quiz. I was a conscientious student and had breezed through the questions, until I read the last one: "What is the first name of the woman who cleans the school?" Surely this was some kind of joke. "Absolutely," said the professor. I've never forgotten that lesson. 2. One night, at 11:30 p.m., an older African American woman was standing on the side of an Alabama highway trying to endure a lashing rainstorm. A young white man stopped to help her, generally unheard of in those conflict-filled 1960s. She seemed to be in a big hurry, but wrote down his address and thanked him. A special note was attached. Sincerely, Mrs. 3. In the days when an ice cream sundae cost much less, a 10 year-old boy entered a hotel coffee shop and sat at a table. The little boy pulled his hand out of his pocket and studied the coins in it. 4.

Best Quotes of All Time It’s been three years since we shared our original list of some of the best quotes of all time, and we felt it was a good time for an update. We’ve added another 25 quotes for you. But these aren’t just any quotes. These are quotes designed to inspire. I know quotes researched online often come in slightly different variations, so if you’ve heard another version of one of these, please share it with us in the comments. Here are our 25 new additions for our list of the best quotes of all time, including some submitted by our readers in response to the original list of best quotes, which you can still find below. “Too many of us are not living our dreams because we are living our fears.” – Les Brown “A goal is a dream with a deadline.” – Napoleon Hill “The road to success and the road to failure are almost exactly the same.” – Colin R. “Twenty years from now you will be more disappointed by the things that you didn’t do than by the ones you did do.” – Mark Twain “Have the courage to say no.