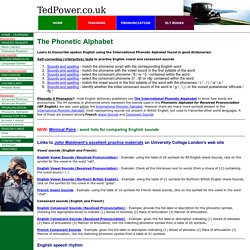 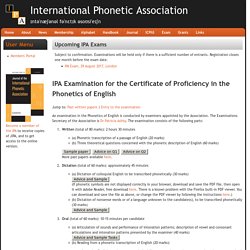 The Examinations Secretary of the Association is Dr Patricia Ashby. The examination consists of the following parts: Written (total of 80 marks): 2 hours 30 minutes (a) Phonetic transcription of a passage of English (20 marks) (b) Three theoretical questions concerned with the phonetic description of English (60 marks) More past papers available here. Dictation (total of 60 marks): approximately 45 minutes (a) Dictation of colloquial English to be transcribed phonetically (30 marks) (If phonetic symbols are not displayed correctly in your browser, download and save the PDF file, then open it with Adobe Reader, free download here. International Phonetic Association. International Phonetic Association. Sounds Archives - The Sound of English. Approximants. English Phonetics: IPA vs American Heritage Dictionary vs Merriam-Webster. This page gives a comparison table of pronunciation symbols for English, used by IPA, and American Heritage Dictionary (AHD) and Merriam-Webster (MW) Dictionary. 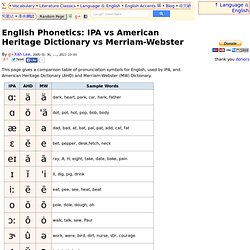 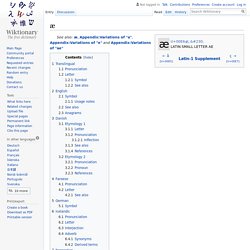 Symbol[edit] æ (IPA) near-open front unrounded vowel See also[edit] English[edit] Symbol[edit] (chiefly dated or linguistic) A ligature of vowels a and e, called ash. Usage notes[edit] Mostly used for words of either Ancient Greek or Latin origin, though also used when referencing Old English texts or using recently derived Old English loanwords.Uncommon in modern times except in linguistic use.Often absent in American English (reduced to e) whenever it has the sound /ɛ/ (SAMPA /E/) or /iː/ (SAMPA /i:/), but sometimes retained (in this form, or as ae) when it has a different sound, as in formulæ/formulae. See also[edit] Key to pronunciations (British and Wo... The pronunciations given represent the standard accent of English as spoken in the south of England (sometimes called Received Pronunciation or RP), and the example words given in this key are to be understood as pronounced in such speech. 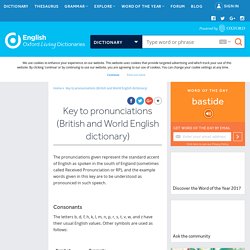 Consonants The letters b, d, f, h, k, l, m, n, p, r, s, t, v, w, and z have their usual English values. Other symbols are used as follows: Vowels. Vowel length - Wikipedia. Vowel length and related features[edit] Among the languages that have distinctive vowel length, there are some where it may only occur in stressed syllables, e.g. in the Alemannic German dialect and Egyptian Arabic. 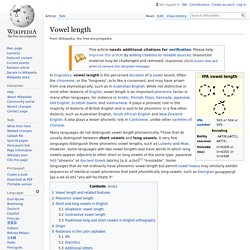 In languages such as Czech, Finnish or Classical Latin, vowel length is distinctive in unstressed syllables as well. In some languages, vowel length is sometimes better analyzed as a sequence of two identical vowels. In Finnic languages, such as Finnish, the simplest example follows from consonant gradation: haka → haan. In some cases, it is caused by a following chroneme, which is etymologically a consonant, e.g. jää "ice" ← Proto-Uralic *jäŋe. 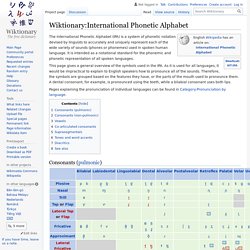 It is intended as a notational standard for the phonemic and phonetic representation of all spoken languages. This page gives a general overview of the symbols used in the IPA. As it is used for all languages, it would be impractical to explain to English speakers how to pronounce all of the sounds. Therefore, the symbols are grouped based on the features they have, or the parts of the mouth used to pronounce them. A dental consonant, for example, is pronounced using the teeth, while a bilabial consonant uses both lips. Pages explaining the pronunciation of individual languages can be found in Category:Pronunciation by language. International Phonetic Alphabet chart for English dialects. This article has information on Canadian English that needs additional citations for verification. 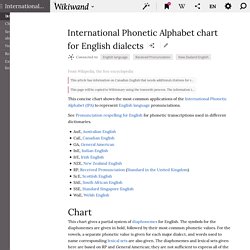 Please help improve this article by adding citations to reliable sources. Unsourced material may be challenged and removed. (March 2009) (Learn how and when to remove this template message) This page will be copied to Wiktionary using the transwiki process. The information in this article appears to be suited for inclusion in a dictionary, and this article's topic meets Wiktionary's criteria for inclusion, has not been transwikied, and is not already represented.