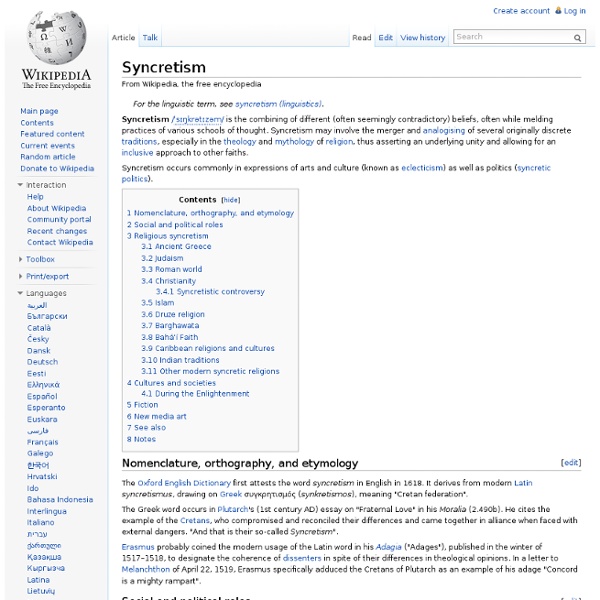 Syncretism /ˈsɪŋkrətɪzəm/ is the combining of different, often seemingly contradictory beliefs, while melding practices of various schools of thought. Syncretism involves the merger and analogizing of several originally discrete traditions, especially in the theology and mythology of religion, thus asserting an underlying unity and allowing for an inclusive approach to other faiths. Syncretism also occurs commonly in expressions of arts and culture (known as eclecticism) as well as politics (syncretic politics). Nomenclature, orthography, and etymology[edit] The Oxford English Dictionary first attests the word syncretism in English in 1618. The Greek word occurs in Plutarch's (1st century AD) essay on "Fraternal Love" in his Moralia (2.490b). Erasmus probably coined the modern usage of the Latin word in his Adagia ("Adages"), published in the winter of 1517–1518, to designate the coherence of dissenters in spite of their differences in theological opinions. Religious syncretism[edit] Related:  neuropharmacology/(religious/spiritual)

Strange loop A strange loop arises when, by moving only upwards or downwards through a hierarchical system, one finds oneself back to where one started. Strange loops may involve self-reference and paradox. The concept of a strange loop was proposed and extensively discussed by Douglas Hofstadter in Gödel, Escher, Bach, and is further elaborated in Hofstadter's book I Am a Strange Loop, published in 2007. A tangled hierarchy is a hierarchical consciousness system in which a strange loop appears. Definitions[edit] A strange loop is a hierarchy of levels, each of which is linked to at least one other by some type of relationship. In I Am a Strange Loop, Hofstadter defines strange loops as follows: In cognitive science[edit] Hofstadter argues that the psychological self arises out of a similar kind of paradox. Strangeness[edit] Downward causality[edit] Hofstadter claims a similar "flipping around of causality" appears to happen in minds possessing self-consciousness. Examples[edit] See also[edit] Tanenbaum, P.

Konkokyo Crest of Konkokyo Konkōkyō (金光教, Konkō-kyō?) or just Konkō, is a new religion of Japanese origin. Founder[edit] Central Worship Hall (Konkōkyō Headquarters) Grand Service Hall (Konkōkyō Headquarters) Bunjirō Kawate (川手文治郎, Kawate Bunjirō? Further, Bunjirō's younger brother by birth, Kandori Shige'emon, became a Konjin-cult medium and faith healer in 1857, and Bunjirō took that as his own impetus to devote himself to Konjin. After the Meiji Restoration of 1868, religious policies of the new government temporarily placed limits on the movement's proselytizing activities, but this provided an opportunity to develop the doctrinal aspects of Konkō faith in works such as the autobiographical Konkō Daijin oboegaki (Memoirs of Konkō Daijin). Beliefs[edit] In Konkokyo, everything is seen as being in profound interrelation with each other. Konkō Daijin taught that one could receive the help of Konjin by "having faith in the kami out of a sincere mind" (jitsui teinei shinjin). Facts[edit]

Francis of Assisi Saint Francis of Assisi (Italian: San Francesco d'Assisi, born Giovanni di Pietro di Bernardone, but nicknamed Francesco ("the Frenchman") by his father, 1181/1182 – October 3, 1226)[1][3] was an Italian Catholic friar and preacher. He founded the men's Order of Friars Minor, the women’s Order of St. Clare, and the Third Order of Saint Francis for men and women not able to live the lives of itinerant preachers followed by the early members of the Order of Friars Minor or the monastic lives of the Poor Clares.[1] Though he was never ordained to the Catholic priesthood, Francis is one of the most venerated religious figures in history.[1] Francis' father was Pietro di Bernardone, a prosperous silk merchant. On July 16, 1228, he was proclaimed a saint by Pope Gregory IX. Early life[edit] The house where Francis of Assisi lived when young Francis of Assisi by Cimabue According to the hagiographic legend, thereafter he began to avoid the sports and the feasts of his former companions. St.

An Interview with Douglas R. Hofstadter, following ''I am a Strange Loop'' Douglas R. Hofstadter is best-known for his book Gödel, Escher, Bach (GEB for short). In his latest book, I am a Strange Loop, he visits once again many of the themes originally presented in that book. The interview below was conducted in September 2007 and was originally published, in Hebrew, in the online culture magazine Haayal Hakore. The interview was conducted by Tal Cohen and Yarden Nir-Buchbinder. The first part of I am a Strange Loop reads like a condensed version of GEB, by explaining the idea of consciousness as a strange loop. I certainly did not believe intelligent machines were just around the corner when I wrote GEB. Am I disappointed by the amount of progress in cognitive science and AI in the past 30 years or so? I am a deep admirer of humanity at its finest and deepest and most powerful — of great people such as Helen Keller, Albert Einstein, Ella Fitzgerald, Albert Schweitzer, Frederic Chopin, Raoul Wallenberg, Fats Waller, and on and on. We'll return to Kurzweil soon.

Transcendence (philosophy) In philosophy, the adjective transcendental and the noun transcendence convey the basic ground concept from the word's literal meaning (from Latin), of climbing or going beyond, albeit with varying connotations in its different historical and cultural stages. This article covers the topic from a Western perspective by epoch: Ancient, Medieval, and modern, primarily Continental philosophy. The first meaning, as part of the concept pair transcendence/immanence, is used primarily with reference to God's relation to the world and is particularly important in theology. Here transcendent means that God is completely outside of and beyond the world, as contrasted with the notion that God is manifested in the world. This meaning originates both in the Aristotelian view of God as the prime mover, a non-material self-consciousness that is outside of the world. In modern philosophy, Kant introduced a new term — transcendental, thus instituting a new, third meaning. Jump up ^ cf.

Sam Harris on Spirituality without Religion, Happiness, and How to Cultivate the Art of Presence by Maria Popova “Our world is dangerously riven by religious doctrines that all educated people should condemn, and yet there is more to understanding the human condition than science and secular culture generally admit.” Nietzsche’s famous proclamation that “God is dead” is among modern history’s most oft-cited aphorisms, and yet as is often the case with its ilk, such quotations often miss the broader context in a way that bespeaks the lazy reductionism with which we tend to approach questions of spirituality today. Nietzsche himself clarified the full dimension of his statement six years later, in a passage from The Twilight of Idols, where he explained that “God” simply signified the supersensory realm, or “true world,” and wrote: “We have abolished the true world. What has remained? Sam Harris by Bara Vetenskap Harris writes: Our minds are all we have. Most of us spend our time seeking happiness and security without acknowledging the underlying purpose of our search. Donating = Loving

Transcendence (religion) In religion, transcendence refers to the aspect of a god's nature and power which is wholly independent of the material universe, beyond all physical laws. This is contrasted with immanence, where a god is said to be fully present in the physical world and thus accessible to creatures in various ways. In religious experience transcendence is a state of being that has overcome the limitations of physical existence and by some definitions has also become independent of it. This is typically manifested in prayer, séance, meditation, psychedelics and paranormal "visions". Although transcendence is defined as the opposite of immanence, the two are not necessarily mutually exclusive. Bahá'ís believe in a single, imperishable god, the creator of all things, including all the creatures and forces in the universe.[1] In the Bahá'í tradition, god is described as "a personal god, unknowable, inaccessible, the source of all Revelation, eternal, omniscient, omnipresent and almighty Thomas J.