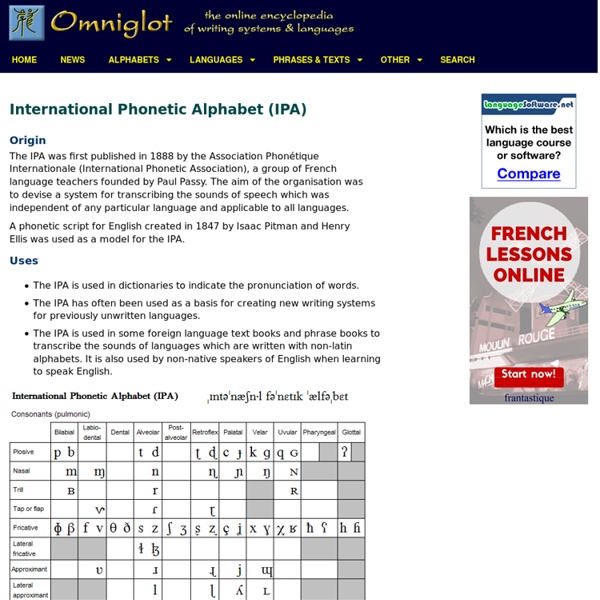 Origin The IPA was first published in 1888 by the Association Phonétique Internationale (International Phonetic Association), a group of French language teachers founded by Paul Passy. The aim of the organisation was to devise a system for transcribing the sounds of speech which was independent of any particular language and applicable to all languages. A phonetic script for English created in 1847 by Isaac Pitman and Henry Ellis was used as a model for the IPA. Uses The IPA is used in dictionaries to indicate the pronunciation of words. Where symbols appear in pairs, the one on the right represents a voiced consonant, while the one on the left is unvoiced. Download an Excel spreadsheet containing the IPA How the sounds of English are represented by the IPA Recommended books about phonetics and phonology Links UCLA Phonetics Lab Data IPA, International Phonetic Association Free IPA fonts

"Born Eunuchs" Home Page and Library The willingness to engage in homosexual activity (particularly intergenerationally) was widespread among men in the ancient Mediterranean region. Women and boys were considered equally tempting sex objects for ordinary men. Therefore, homosexual activity could not have provided a means of distinguishing a minority of men as "gay" the way we do in the modern world. However, the ancients did differentiate based on an unwillingness or incapacity for heterosexual sex. Certain men were known to fundamentally lack arousal for sex with women, and men of this kind were distinguished from the majority of ordinary men on that basis. The innately and exclusively homosexual men of the ancient world inhabited the category of eunuchs. What was called sodomy in the Judeo-Christian tradition, namely the sexual penetration of "males," was criminalized in many ancient cultures. email: aquarius@well.com visitors since 3/1/99 © 1999 Faris Malik.