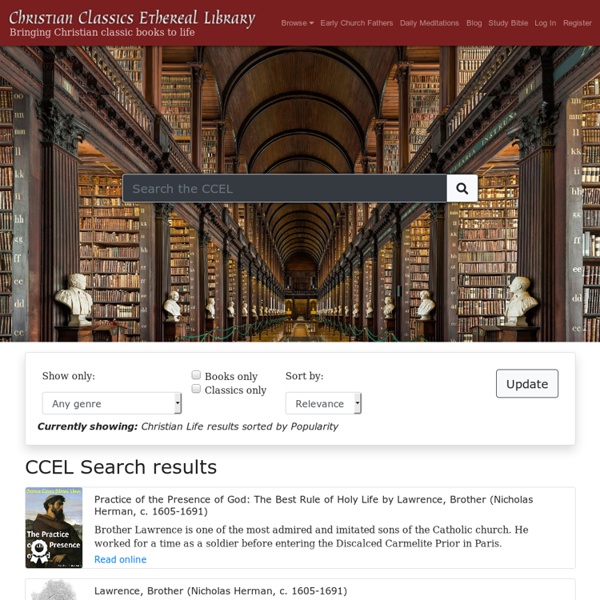 Books and Titles Art | Economics | History | Law | Literature | Music | Philosophy | Political Theory | Religion | Science | Sociology | War and Peace Alphabetical List of all Titles | Liberty Fund Books online These are places to go to if you are looking for books, articles, pamphlets, audio, and other titles: Can Evangelicalism Survive Donald Trump and Roy Moore? For centuries, renewal movements have emerged within Christianity and taken on different forms and names. Often, they have invoked the word “evangelical.” Followers of Martin Luther, who emphasized the doctrine of salvation by faith alone, described themselves in this way. The Cambridge clergyman Charles Simeon, who led the Low Church renewal movement within the Church of England, adopted the label. The trans-Atlantic eighteenth-century awakenings and revivals led by the Wesleys were also often called “evangelical.” In the nineteen-forties and fifties, Billy Graham and others promoted the word to describe themselves and the religious space they were seeking to create between the cultural withdrawal espoused by the fundamentalist movement, on the one hand, and mainline Protestantism’s departures from historic Christian doctrine, on the other.

Bilingual (Latin/English) Hardcover Editions of Aquinas As many readers will already know, The Aquinas Institute for the Study of Sacred Doctrine, headquartered in lovely Lander, Wyoming, still nurtures the ambition -- with the help of Divine Providence and the support of Thomists (and other people who still read books) -- of publishing the Complete Works of the Angelic Doctor in a uniform, hardcover, bilingual edition. Lest this sound like an absurd prospect, it seemed a good time to issue a reminder of the volumes already produced (and ALWAYS in print!) as well as volumes currently in production or in the final stages of editing. (These volumes are available at Amazon either singly or as sets: the Summa theologiae; the Matthew & John; the Pauline letters.)

CHAPTER VIII.: of the holy scriptures. - The Works of John Robinson, vol. 1 Edition: current; Page: [vi]Edition: current; Page: [vii]CHAP.I. Of Man's Knowledge of God.II. Of God's Love.III. Early Church Fathers - Additional Works in English Translation unavailable elsewhere online Early Church Fathers - Additional Texts Edited by Roger Pearse These English translations are all out of copyright, but were not included in the 38 volume collection of Ante-Nicene, Nicene and Post-Nicene Fathers.

Beth Moore: The Evangelical Superstar Taking on Trump For decades, Moore never broke stride. In the past few years, however, she has felt out of step with the evangelical community. During the 2016 campaign, many of its leaders not only excused Donald Trump’s boorish behavior but painted him as a great defender of Christianity—evangelicals’ “dream president,” in the words of Jerry Falwell Jr. Beta versions of Thomas's Summa and NT scriptural commentaries The people behind The Opera Omnia Project are working on a number of translations of Thomas's works, including recent printings of the Summa theologiae and Thomas's New Testament commentaries. To that end they have constructed a web application that they use to create the English translations, entering them side-by-side with the Latin text. Jeremy Holmes, on the contributors, graciously provided me with the URL to this web app, encouraging me and others to peruse it—provided we all take note that it is in beta. Hope on over to and take it for a spin. As this time the Summa and the NT Biblical commentaries are online.

Gutenberg On August 26 2020, the Project Gutenberg website underwent some major changes. These changes had been previewed since early 2020, and visitors to the old site were invited to try the new site, including giving input via a brief survey. The old site is no longer available. If you found yourself on this page unexpectedly, it is because an old page was redirected here. Please use the navigation menus at the top of the page to find what you were looking for.

Benedict Option FAQ What is the Benedict Option? Start with this famous paragraph from philosopher Alasdair MacIntyre’s book After Virtue: It is always dangerous to draw too precise parallels between one historical period and another; and among the most misleading of such parallels are those which have been drawn between our own age in Europe and North America and the epoch in which the Roman empire declined into the Dark Ages. Nonetheless certain parallels there are. A crucial turning point in that earlier history occurred when men and women of good will turned aside from the task of shoring up the Roman imperium and ceased to identify the continuation of civility and moral community with the maintenance of that imperium.