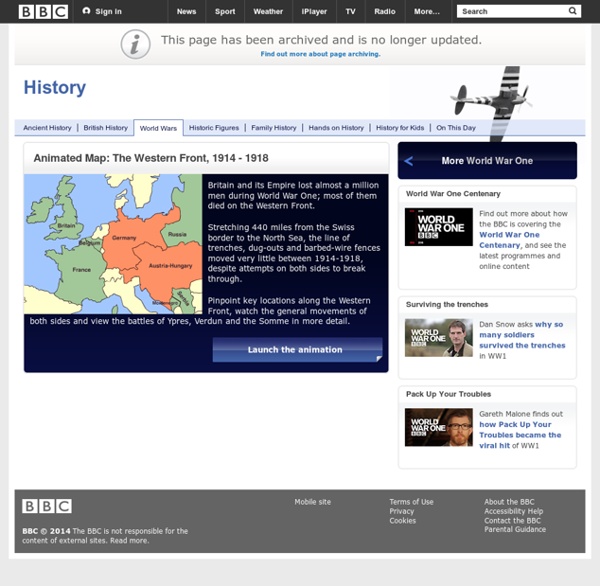 Britain and its Empire lost almost a million men during World War One; most of them died on the Western Front. Stretching 440 miles from the Swiss border to the North Sea, the line of trenches, dug-outs and barbed-wire fences moved very little between 1914-1918, despite attempts on both sides to break through. Pinpoint key locations along the Western Front, watch the general movements of both sides and view the battles of Ypres, Verdun and the Somme in more detail.

World War One - What is a Trench? Trench warfare characterised much of the fighting during World War One, particularly along the Western Front. Trench systems were complicated with many interlinking lines of trenches. Front Line Trench Cross Section Artillery Line After the American Revolution: Free African Americans in the North Activity 1. Meet Sojourner Truth Without revealing her identity, share with the class Sojourner Truth's carte de visite from the EDSITEment resource American Memory. According to the Library of Congress: [these] miniature portraits used as calling cards, were extremely popular during the American Civil War. These photographic calling cards, approximately 21/2 x 4 inches in size, had been invented in France in the early 1850s, and their popularity quickly spread throughout Europe and eventually to the United States, where the corollary development of the photograph album spurred a collecting craze in the 1860s that became known as Cartomania.

The Causes and Effects That Led to World War I Sep 22, 2014 100 summers ago the countries of Europe collapsed quickly into war: it was sudden but also strangely inevitable. Countless books have been written since about the causes of The Great War, but in this video essay, delve.tv offers an alternative history. By tracing the story backwards in time, they stumble upon a very unexpected cause and discover that sometimes the most harmless of things can have terrible consequences. Story Design & Direction: Adam Westbrook Additional Photography: Brett Walsh Animation: Adam Westbrook

Teaching With Documents Skip Navigation. Teachers Home > Teachers' Resources > Teaching With Documents Lessons by Era Why our WWI casualty number are wrong Illustration: John Spooner Search for details of Australia’s dead and wounded in the First World War and the figures thrown up are remarkably similar: of the 331,000 men who embarked from Australia with the Australian Imperial Force (AIF), 60,000 were killed and there were 155,000 admissions for wounding. These statistics are presented, with minor variations, on the websites of the National Archives of Australia, the Australian War Memorial, the Australian War Graves Commission, the Australian Parliamentary Library, and in the records of the British War Office and Australia’s official history of the First World War by C.E.W Bean. Winning this war came at too high a cost for this young nation; for Australia, the First World War was indeed a pyrrhic victory. This means superficially around two out of three soldiers died or were wounded in the First World War. These figures have been quoted in every publication referring to Australia’s casualties since fighting stopped in 1918.

Lesson Plan The Civil War era is one of the most critical and fascinating in our nation's history. The many books about this period written for young audiences provide a rich context in which to learn about the Civil War itself and to explore more basic issues about the nature of human life and society. The following lesson plan for an upper elementary unit on the Civil War contains links to other Internet sites that can provide valuable cross-curricular materials for you and your students. Objectives U.S. enters World War I — History.com This Day in History — 4/6/1917 Apr 6, 1917: On April 6, 1917, two days after the U.S. Senate votes 82 to 6 to declare war against Germany, the U.S. House of Representatives endorses the decision by a vote of 373 to 50, and the United States formally enters the First World War. When World War I erupted in 1914, President Woodrow Wilson pledged neutrality for the United States, a position favored by the vast majority of Americans.

Christmas Truce of 1914 - World War I Starting on Christmas Eve, many German and British troops sang Christmas carols to each other across the lines, and at certain points the Allied soldiers even heard brass bands joining the Germans in their joyous singing. At the first light of dawn on Christmas Day, some German soldiers emerged from their trenches and approached the Allied lines across no-man’s-land, calling out “Merry Christmas” in their enemies’ native tongues. At first, the Allied soldiers feared it was a trick, but seeing the Germans unarmed they climbed out of their trenches and shook hands with the enemy soldiers. The men exchanged presents of cigarettes and plum puddings and sang carols and songs.