Americans at War. The World at War, history of WW 1939-1945. HyperWar: World War II on the World Wide Web. The content of HyperWar consists primarily of official documents produced by various agencies of the United States, United Kingdom and British Commonwealth governments. 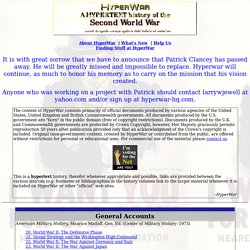 Original (non-government) content, created by HyperWar or contributed from the public, are offered without restrictions for personal or educational uses. For commercial use of the material please contact us. --HyperWar. World War II resources (Virtual Programs & Services, Library of Congress) Compiled by Mark F. 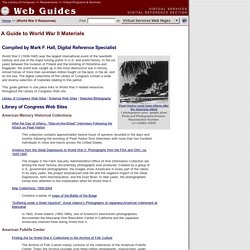 Hall, Digital Reference Specialist World War II (1939-1945) was the largest international event of the twentieth century and one of the major turning points in U.S. and world history. In the six years between the invasion of Poland and the bombing of Hiroshima and Nagasaki, the world was caught up in the most destructive war in history. Armed forces of more than seventeen million fought on the land, in the air, and on the sea. The digital collections of the Library of Congress contain a wide and diverse selection of materials relating to this period. This guide gathers in one place links to World War II related resources throughout the Library of Congress Web site. Library of Congress Web Sites | External Web Sites | Selected Bibliography Library of Congress Web Sites After the Day of Infamy: "Man-on-the-Street" Interviews Following the Attack on Pearl Harbor America from the Great Depression to World War II: Photographs from the FSA and OWI, ca. 1935-1945 February 4 June 6. 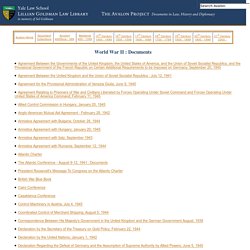