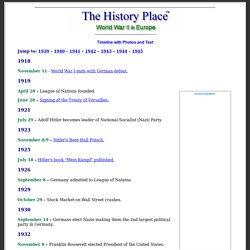 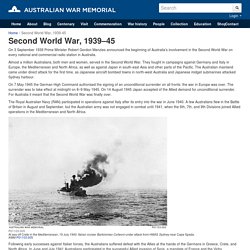 Almost a million Australians, both men and women, served in the Second World War. They fought in campaigns against Germany and Italy in Europe, the Mediterranean and North Africa, as well as against Japan in south-east Asia and other parts of the Pacific. The Australian mainland came under direct attack for the first time, as Japanese aircraft bombed towns in north-west Australia and Japanese midget submarines attacked Sydney harbour. Australia's War 1939-1945. Australians in World War II. The Australian Home Front during World War 2 - Overview. The Home Front - World War 2 An overview by Robert Lewis Initial Reactions When war broke out in September 1939 the Australian Government was much better prepared for it than in 1914. 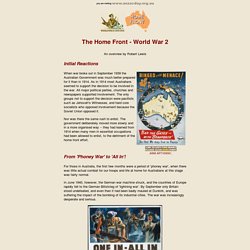 As in 1914 most Australians seemed to support the decision to be involved in the war. All major political parties, churches and newspapers supported involvement. Nor was there the same rush to enlist. From 'Phoney War' to 'All In'! For those in Australia, the first few months were a period of 'phoney war', when there was little actual combat for our troops and life at home for Australians at this stage was fairly normal. In June 1940, however, the German war machine struck, and the countries of Europe rapidly fell to the German Blitzkrieg of 'lightning war'. Home WWII. Unlike World War I, the Second World War was waged much closer to home. 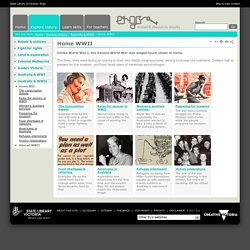 This time, they were facing an enemy in their own Pacific neighbourhood, aiming to invade the mainland. Civilians had to prepare for the invasion, and they faced years of hardships and shortages. Australia entered the war with only a small army: it had to urgently build a large fighting force. Women were ready to serve and suffer in the cause of winning the war. World War II was an opportunity for Australian women to take a step outside of the domestic sphere. The war was a political struggle for Prime Minister John Curtin, while the people prepared for invasion. Everyday life on the home front had to change when basic food items became hard to find. Australians met Americans for the first time and discovered they did not always match the Hollywood image. 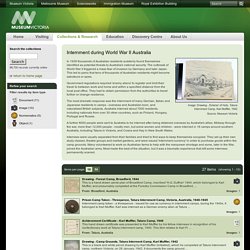 The outbreak of World War II triggered a mass fear of invasion by Germany and later Japan. This led to panic that tens of thousands of Australian residents might become saboteurs or spies. The Japanese bombing of Darwin, Broome and northern Australia. Merchant vessels Barossa and Neptuna burning in Darwin Harbour near the jetty after receiving direct hits during the first Japanese air raid on 19 February 1942. 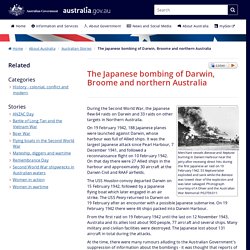 SS Neptuna later exploded and sank while the Barossa was towed clear of the explosion and was later salvaged. Photograph courtesy of A Oliver and the Australian War Memorial: P02759.011. During the Second World War, the Japanese flew 64 raids on Darwin and 33 raids on other targets in Northern Australia. On 19 February 1942, 188 Japanese planes were launched against Darwin, whose harbour was full of Allied ships.

It was the largest Japanese attack since Pearl Harbour, 7 December 1941, and followed a reconnaissance flight on 10 February 1942. The USS Houston convoy departed Darwin on 15 February 1942, followed by a Japanese flying boat which later engaged in an air strike. From the first raid on 19 February 1942 until the last on 12 November 1943, Australia and its allies lost about 900 people, 77 aircraft and several ships.