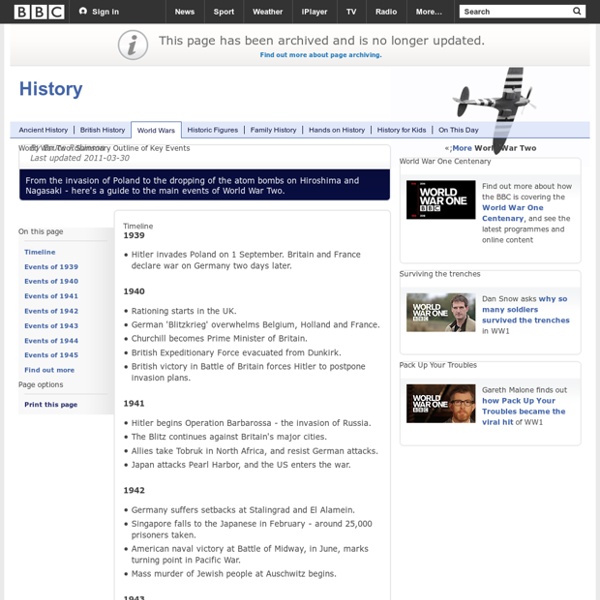 WWII Battles and the Ultimate End - Mrs. Donna Roman APUSH 2018-- WWII battlesAPUSH 2018-- WWII battlesA cause and effect timeline of both the European and Pacific Theatre using my directions. Cause and Effect Timeline for each theatre-- -Using your Google Folder of class-created notes and referencing the simple timelines above, create FOUR cause and effect chart/visual/infographic for the European and Pacific Theatres (2 for each). Consider including wartime conferences where appropriate. Also consider major cause and effect among your events! -Identify the TURNING POINT in Europe and the Pacific. Battles of the Second World War Battles Operations Elkton III Plan Operation Aerial, the evacuation from north western France, 15-25 June 2008 Operation Appease - the battle of Talasea, 6-11 March 1944 Operation Blissful - The Choiseul Raid, 27 October-4 November 1943 Operation Cartwheel - the Reduction of Rabaul (30 June 1943- January 1944) Operation Chariot, the St. Nazaire Raid, Part One Operation Chariot, the St.

News, Articles, Photos & More Travel like a Historian in Massachusetts The state may be home to America's quirkiest historic mansion. Read More Why the U.S. The Battle of Stalingrad The Battle of Stalingrad is considered by many historians to have been the turning point in World War Two in Europe. The battle at Stalingrad bled the German army dry in Russia and after this defeat, the Germany Army was in full retreat. One of the ironies of the war, is that the German Sixth Army need not have got entangled in Stanlingrad. Army Groups A and B were well on their way to the Caucasus in south-west Russia, when Hitler ordered an attack on Stalingrad.

The Battle of Britain: a brilliant triumph that involved far more than just the chosen few At 4.30pm on 14 August 1940, 87 Squadron scrambled to their Hurricanes, quickly got airborne and started speeding towards Weymouth on the Dorset coast. “One hundred and twenty plus approaching Warmwell from the south,” came the calm voice of the ground controller in the pilots’ ears. “Good luck, chaps.” Pilot Officer Roland ‘Bee’ Beamont swallowed hard and began desperately to scan the sky. They were over Lyme Regis and flying at around 12,000ft when Beamont saw them, still out to sea – what looked to him like a gigantic swarm of bees all revolving around each other in a fantastical spiral from around 8,000 to 14,000ft. As the Hurricanes drew closer, Beamont could see there were about 50 Stuka dive-bombers and two-engine Messerschmitt 110s above, and single-engine Me109s above them.

A Black History Internet Scavenger Hunt Send students on a Black History scavenger hunt. Students can learn about famous black Americans while polishing their Internet surfing skills. Included: Four different "hunts" -- for students of all ages. Choose a Black History Internet Scavenger Hunt from the list below. Invite students to read the ten clues on the assigned page. Battle of Stalingrad - World War II The Russians hailed it a “contemporary Cannae,” and the Germans condemned it as a Rattenkrieg (Rat War). Both descriptions were fitting. In the Battle of Stalingrad, Soviet forces surrounded and crushed an entire German army under General Friedrich Paulus, emulating Hannibal’s encirclement and destruction of a Roman army under Aemilius Paulus in 216 B.C. For both sides, Stalingrad became a desperate ordeal of rodentlike scurrying from hole to hole.