The Holocaust History - A People's and Survivor History - Remember.org 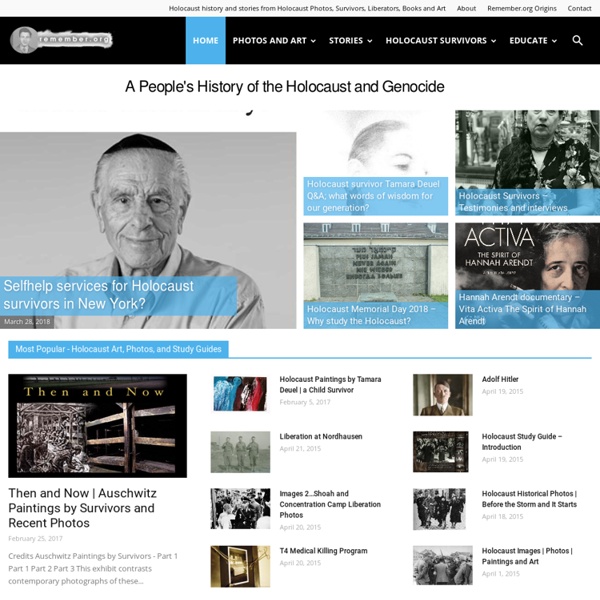 Remember.org shares art, discussion, photos, poems, and facts to preserve powerful memories, like A Survivor’s Prayer to millions of visitors since 1994. Education: History, Lesson Plans, and Resources Learn the facts through lesson plans, research and timelines, including our Teacher’s Guide to the Holocaust. Books by Survivors Listen to survivors through books. Including Abe’s Story, The Last Sunrise, Jan Karski and Courage Under Siege and many others with extensive excerpts and photos available online. How to Find What You Are Looking For..Check out our links pages.Remember.org is organized into 2 sections: Research, areas where you can explore the issues of the Holocaust, and Art, where original art are shared.

The BBC Flew a Drone Over Auschwitz — And the Result Is Haunting Seventy years after the liberation of the Auschwitz-Birkenau concentration camp, the pre-eminent symbol of the Holocaust's horrors, the BBC is giving the world a chance to see the haunting ruins as they've never seen it before. The BBC deployed a camera-equipped drone over site, offering a chilling tour of where as many as 1.1 million people died at the hands of Nazis between 1940 and 1945. Located in southern Poland, it was the largest death camp under Adolf Hitler's "final solution." While images of Auschwitz have permeated popular culture, the under three-minute video gives a sense of the scale of the Nazi regime's systematic murder. The footage shows the railroad tracks that brought people in, the red roofs of the prison blocks where "inmates" were forced to do slave labor and the Birkenau wooden huts where the Nazis executed prisoners. The release of the footage coincides with Tuesday's official memorial service making the 70th anniversary since Auschwitz was freed by the Soviets.

US Holocaust Memorial Museum: The doctors trial: The medical case of the subsequent Nuremberg Proceedings Historical Photographs Brigadier General Telford Taylor, Chief of Counsel, during the Doctors Trial, which was held in Nuremberg, Germany, from December 9, 1946, to August 20, 1947. During testimony at the Doctors Trial, American medical expert Dr.

Holocaust Memorial Day Trust The Holocaust Memorial Day Trust (HMDT) is the charity that promotes and supports Holocaust Memorial Day (HMD). HMD has taken place in the UK since 2001, with a UK event and over 2,400 local activities taking place on or around 27 January each year. The UK played a leading role in establishing HMD as an international day of commemoration in 2000, when 46 governments signed the Stockholm Declaration. The UK Government had responsibility for running HMD from 2001-2005, organised through the Home Office. In May 2005 HMDT was registered as a charity (charity no: 1109348) and the then Home Secretary David Blunkett appointed HMDT Trustees for the first time. US Holocaust Memorial Museum: Nazi Persecution of Homosexuals After taking power in 1933, the Nazis persecuted homosexuals as part of their so-called moral crusade to racially and culturally purify Germany. This persecution ranged from dissolution of homosexual organizations to internment of thousands of individuals in concentration camps. Gay men, in particular, were subject to harassment, arrest, incarceration, and even castration. In Nazi eyes, gay men were weak and unfit to be soldiers, as well as unlikely to have children and thereby contribute to the racial struggle for Aryan dominance. Follow the links on this special focus page to learn more about the Nazi campaign against homosexuals in Germany.

Simulations Can Change the Course of History . . . Classes I went to a Professional Development workshop several years ago with a master history teacher, Eric Rothschild, who spent his career teaching at Scarsdale High School. He was a brilliant workshop facilitator, and I learned more about teaching history in that workshop than in any other professional development experience I'd had up to that point in my career. He ran a workshop on teaching AP U.S. Web - World War II, 1939-45 - Research Guides at Tidewater Community College "The Code Talkers’ role in war required intelligence and bravery. They developed and memorized a special code. They endured some of the most dangerous battles and remained calm under fire.