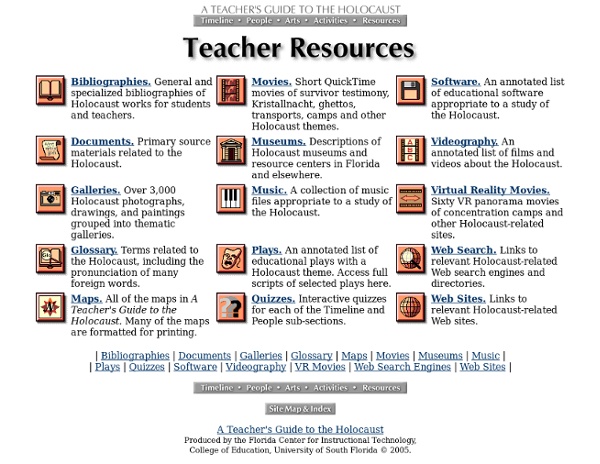 Teachers TV video collection - Primary History - Lesson Starters - The Victorians Skip to main content Jobs TES the largest network of teachers in the world My TES 20 Awesome Web Tools For Teachers & Professors The arrival of internet has brought about significant changes in the way we work and live. That includes the way we teach and study. Classrooms today aren't just about teachers writing on blackboards and students scribbling on paper.

Encyclopædia Britannica's Guide to Women's History For millennia, women have left their mark on the world, at times changing the course of history and at other times influencing small but significant spheres of life. Only in the past century, however, have concerted efforts been made to represent women's contributions more fully in history books. Consequently, changes in status for many women in modern times—the right to own property, to vote, and to choose their own careers—may obscure the accomplishments made by women of earlier eras. In selecting 300 influential women, Encyclopædia Britannica has included both contemporary women who are changing today's world and those whose contributions have endured through the ages.

California Gold Rush - A fun poem for kids The California gold rush took place in the days of the wild west, when thousands of people flocked to the area convinced that they would find gold and make their fortunes. This poem was written in 2009 by Paul Perro. It tells the story of the gold rush in a fun and exciting way, from the perspectives of the two people at the beginning of the story, James Marshall and John Sutter. After you have finished enjoying the poem, please scroll down a little further to find out more facts about the gold rush. Samuel J. Seymour, Last Surviving Witness Of Lincoln Assassination, Appears... Thanks to YouTube, this gem in American history has been preserved. In February 1956, two months before his death, 96-year-old Samuel J. Seymour appeared on the CBS television show "I've Got A Secret." His secret: he witnessed Abraham Lincoln's assassination when he was five years old. Sure enough, Seymour has been widely recognized as the last surviving person in America who had been present at Ford's Theatre the night of Lincoln's assassination on April 14, 1865. According to the Washington Times, Seymour attended the Ford's Theatre performance as a young boy with family friends.

District Six, Cape Town District Six Location of District Six District Six in 2014 District Six memorial plaque Primary History - Home - primaryhistory Directors: Jon Nichol, John Fines, Jacqui Dean and Ray Verrier The Nuffield Primary History principle is that everything published has been taught by teachers or the team. Lessons take the form of a narrative based on work with children. Technology Integration Ideas that Work Technology has become integrated in the classroom in so many ways, that we often don't even think about how we are using it. The Education World Tech Team offers lessons and activities to help educators make better use of technology tools for instruction, and to help students improve their technology skills within the context of the regular curriculum. Included: Integration activities that utilize the Web, PowerPoint, Excel, digital photography, SMART Boards, and more. In more and more schools today, technology is recognized as an instructional tool, not as a subject of instruction. Still, many educators, less familiar and less comfortable with technology than their students, struggle to seamlessly integrate a growing list of technology tools into their regular curriculum.

Juba II Coin of Juba II. Juba II (Iuba in Latin; Ancient Greek: Ἰóβας, Ἰóβα or Ἰούβας; [1]Tifinagh: ⵢⵓⴱⴰ ⵡⵉ ⵙⵙⵉⵏ Yuba wi ssin) or Juba II of Numidia (52/50 BC – AD 23) was a king of Numidia and then later moved to Mauretania. His first wife was Cleopatra Selene II, daughter of Greek Ptolemaic Queen Cleopatra VII of Egypt and Roman triumvir Mark Antony. Early life[edit] Online Projects Are for Everyone Are you tired of locating the "perfect" Internet activity, only to find it full of dead links and confusing directions? Are you bored with P owerPoint? Are you looking for interesting technology integration activities that work the first time, every time?