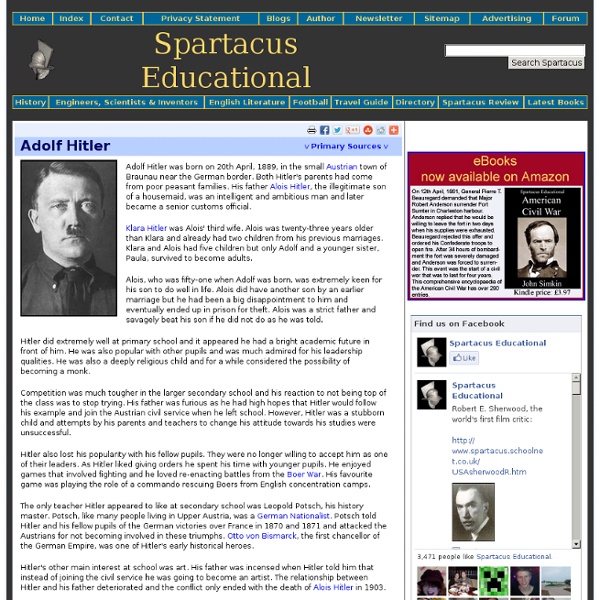 Adolf Hitler was born on 20th April, 1889, in the small Austrian town of Braunau near the German border. Both Hitler's parents had come from poor peasant families. His father Alois Hitler, the illegitimate son of a housemaid, was an intelligent and ambitious man and was at the time of Hitler's birth, a senior customs official in Lower Austria. Alois had been married before. In 1873 he had married Anna Glasl, the fifty-year-old adopted daughter of another customs collector. According to Ian Kershaw, the author of Hitler 1889-1936 (1998): "It is unlikely to have been a love-match. Klara Polzl, Hitler's mother, left home at sixteen to to join the household of her second cousin, Alois Hitler. Franziska saw Klara as a potential rival and insisted that she left the household. The first of the children of Alois's third marriage, Gustav, was born in May 1885, to be followed in September the following year by a second child, Ida, and another son, Otto, who died only days after his birth. Dr.

The SS Black Book The Black Book was the post-war name given to the Sonderfahndungsliste G.B. ('Special Search List G.B'), the list of prominent Britons to be arrested in the case of a successful invasion of Britain by Nazi Germany in World War II. The list was a product of the SS Einsatzgruppen and compiled by Walter Schellenberg. It contained the names of 2,820 people, British subjects and European exiles, living in Britain who were to be immediately arrested if Unternehmen Seelöwe, the invasion of Britain, succeeded. The list was appended to the 'Informationsheft GB', a 144 page handbook containing information on important aspects of British society including institutions such as embassies, universities, newspaper offices, and Freemasons' Lodges.

Dunkirk Dunkirk, and the evacuation associated with the troops trapped on Dunkirk, was called a "miracle" by Winston Churchill. As the Wehrmacht swept through western Europe in the spring of 1940, using Blitzkrieg, both the French and British armies could not stop the onslaught. For the people in western Europe, World War Two was about to start for real. The "Phoney War" was now over. Bombing of Tokyo Bombing of Tokyo (東京大空襲, Tōkyōdaikūshū?), often referred to as a series of firebombing raids, was conducted as part of the air raids on Japan by the United States Army Air Forces during the Pacific campaigns of World War II. The US first mounted a small-scale raid on Tokyo in April 1942. Strategic bombing and urban area bombing began in 1944 after the long-range B-29 Superfortress bomber entered service, first deployed from China and thereafter the Mariana Islands. B-29 raids from those islands began on 17 November 1944, and lasted until 15 August 1945, the day Japan capitulated.[1] The Operation Meetinghouse air raid of 9–10 March 1945 was later estimated to be the single most destructive bombing raid in history.[2] §Doolittle Raid[edit]

The most brutal battle in history Germans fighting for every inch of the road to Stalingrad, 1942 [] Four-and-a-half-million men deploying 600,000 vehicles, 3,700 tanks, 750,000 horses, 1,800 bombers and fighters and half a million guns streamed eastwards on a 1,800-mile-long front at 3.15am on the morning of June 22, 1941. They were the bearers of a New World Order whose cruelty would beggar belief. This was the start of Operation Barbarossa, Hitler’s assault on the Soviet Union intended to wipe out communism, the Jewish race, and to give Germans the “living space” upon the vast Russian steppes that the Führer had promised his people in Mein Kampf. Battle of Stalingrad - World War II The Russians hailed it a “contemporary Cannae,” and the Germans condemned it as a Rattenkrieg (Rat War). Both descriptions were fitting. In the Battle of Stalingrad, Soviet forces surrounded and crushed an entire German army under General Friedrich Paulus, emulating Hannibal’s encirclement and destruction of a Roman army under Aemilius Paulus in 216 B.C. For both sides, Stalingrad became a desperate ordeal of rodentlike scurrying from hole to hole. This monumental battle is justly considered a turning point in the war on the Eastern Front and one of the most crucial engagements of World War II. The invading Germans saw the conquest of Stalingrad as essential to their campaign in southern Russia, since from this strategic point on the Volga River they could launch further assaults in the Caucasus.

The Battle of Stalingrad The Battle of Stalingrad is considered by many historians to have been the turning point in World War Two in Europe. The battle at Stalingrad bled the German army dry in Russia and after this defeat, the Germany Army was in full retreat. One of the ironies of the war, is that the German Sixth Army need not have got entangled in Stanlingrad. Army Groups A and B were well on their way to the Caucasus in south-west Russia, when Hitler ordered an attack on Stalingrad. From a strategic point of view it would have been unwise to have left a major city unconquered in your rear as you advanced. However, some historians believe that Hitler ordered the taking of Stalingrad simply because of the name of the city and Hitler’s hatred of Joseph Stalin.

Second World War 1939 - 1945 Our records cover the entire conflict from Churchill's desk downwards. Read the PM's signed orders and top level diplomacy with Roosevelt and Stalin alongside reports from all theatres of war and every aspect of the situation on the Home Front - from what was shown in the nation's cinemas to recipes for British kitchens. Imperial War Museum Horrible Histories Spies exhibition: Amazing gadgets of WWII heroes from rat bombs to pipe pistols The Imperial War Museum in London pays tribute to our spy heroes - and reveals the bizarre gadgets dreamt up to help them James Bond-style spy gizmos were in use long before 007 first strode onto the screen. All through the Second World War, courageous men and women of the Special Operatives Executive used bizarre gadgets to collect enemy secrets and send the info back to base, always in peril of their lives.