The defiance of Britain as it endured eight months of German bombing 70 years ago is etched on the collective memory and immortalised in the phrase "Blitz spirit". 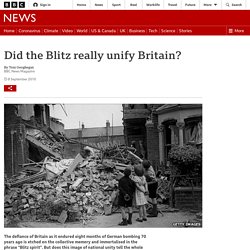 But does this image of national unity tell the whole story? Even for those lucky enough not to have been there, the sound of the sirens is enough to evoke those nights of 1940 when British cities were under constant attack. For eight consecutive months, every dawn brought a new terrible toll - more bodies, more craters in the street, more buildings reduced to rubble and more fires.

People emerged from air raid shelters, from under railway arches or merely from under the stairs, to see if their homes were still standing, or if their neighbours were still alive. Then they dusted themselves down and went to work. This period has become part of British folklore and the Blitz spirit a byword for stoicism, invoked at times of need, like after the 7/7 bombings in London. "There was endurance in the face of an external danger. The first raid on London by the Luftwaffe. The Blitz Around Britain. The 'Blitz' – from the German term Blitzkrieg ('lightning war') – was the sustained campaign of aerial bombing attacks on British towns and cities carried out by the Luftwaffe (German Air Force) from September 1940 until May 1941. 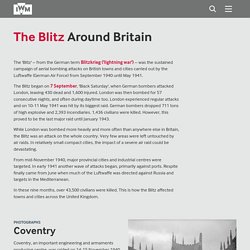 The Blitz began on 7 September, 'Black Saturday', when German bombers attacked London, leaving 430 dead and 1,600 injured. London was then bombed for 57 consecutive nights, and often during daytime too. London experienced regular attacks and on 10-11 May 1941 was hit by its biggest raid. German bombers dropped 711 tons of high explosive and 2,393 incendiaries. 1,436 civilians were killed. However, this proved to be the last major raid until January 1943. London History: A Look at The London Underground During World War II. Millions of people travel on the London Underground every day, but few of them have ever taken shelter there or know fully how their everyday commute played such a large role in World War II. 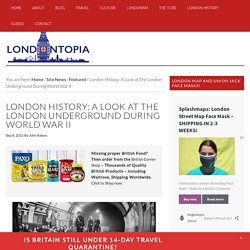 London Can Take It: 10 Interesting Facts and Figures about the London Blitz You Might Not Know. Between 7 September 1940 and 21 May 1941, Nazi Germany launched a bombing campaign against major cities in the United Kingdom. 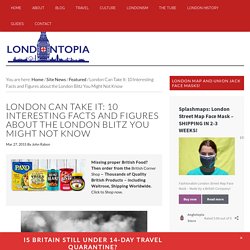 The Nazis targeted a total of 16 British cities, with Birmingham, Liverpool, and Plymouth hit 8 times, Bristol 6, Glasgow 5, Southampton 4, Portsmouth and Hull 3, and nearly every other major city at least once. London, though, got the worst of it with 71 attacks. Despite the relentless pounding by the bombs, London remained resilient and outlasted a campaign that ultimately did little to hurt Britain’s war effort. Check out ten interesting facts and figures from this trying time in the city’s history. Phoney Baloney Many people expected an immediate attack from Nazi Germany after Britain declared war on 3 September 1939, yet no attack came. Meaning “Blitz” is short for “blitzkrieg” or “lightning war”. World War 2 Clips - BBC Teach. H1MIN: V1 FLYING BOMB. Secret German V2 Film Discovered (1946) Rationing in WWII (British Homefront) The 2nd Great Fire of London - St Pauls Cathedral in WW2. Military Records Blog - Tag Archives: Blitz. 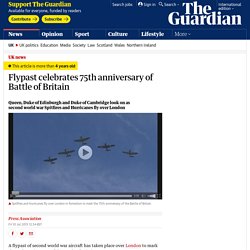 Spitfires and Hurricanes flew over Buckingham Palace on Friday as the Queen, Duke of Edinburgh and Duke of Cambridge looked on. The planes from the Battle of Britain memorial flight were joined by contemporary Typhoon jets, which produced a deafening roar. Among the guests invited to witness the flypast were six second world war RAF pilots, dubbed the “few” by the wartime prime minister, Winston Churchill. Squadron Leader Duncan Mason, from RAF Coningsby, who led the flypast in a Spitfire, said: “For us, taking part today was an incredible honour. “Events like these don’t often happen, but today gave us – the RAF and the nation – the opportunity to commemorate and recognise those extraordinary feats 75 years ago. The 75th anniversary is likely to be the last major milestone at which the veteran airmen will be fit to take part. German Bombing Targets - Horrible Histories.

The Blitz : German bombing campaign against Britain in 1940.