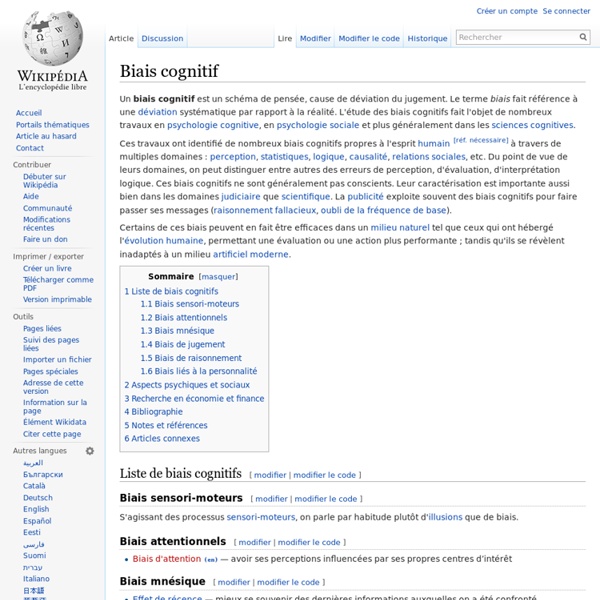 Illusion of transparency - Wikipedia The illusion of transparency is a tendency for people to overestimate the degree to which their personal mental state is known by others.[1] Another manifestation of the illusion of transparency (sometimes called the observer's illusion of transparency) is a tendency for people to overestimate how well they understand others' personal mental states. This cognitive bias is similar to the illusion of asymmetric insight. Experimental support[edit] For her PhD dissertation in psychology at Stanford University, Elizabeth Newton created a simple test that she regarded as an illustration of the phenomenon.[2] She would tap out a well-known song, such as "Happy Birthday" or the national anthem, with her finger and have the test subject guess the song. People usually estimate that the song will be guessed correctly in about 50 percent of the tests, but only 3 percent pick the correct song. Public speaking and stage fright[edit]

The Mathematician's Glossary of Non-Mathematical Terms All right. After having done some heavy-duty math this semester, we have decided to slack off a bit for good and ponder on, hmm…a different kind of mathematics altogether. “What?”, you ask? Well, if you are reading this, chances are that either you are non-mathematical, or you have been doing math for quite a while now. Skim reading is the new normal. The effect on society is profound Look around on your next plane trip. The iPad is the new pacifier for babies and toddlers. Younger school-aged children read stories on smartphones; older boys don’t read at all, but hunch over video games. Parents and other passengers read on Kindles or skim a flotilla of email and news feeds. False attribution False attribution can refer to: Misattribution in general, when a quotation or work is accidentally, traditionally, or based on bad information attributed to the wrong person or groupA specific fallacy where an advocate appeals to an irrelevant, unqualified, unidentified, biased, or fabricated source in support of an argument.[1] Fallacy[edit] The fallacy of false attribution is a type of appeal to authority, where the proponent either hides or puffs up the credentials or credibility of the source to enhance an argument.

The Difference Between Pedagogy, Andragogy, And Heutagogy by Terry Heick Jackie Gerstein’s passionate thinking about learning is some of my favorite to read. She is rarely pulled down by trend or fad, but is unquestionably progressive and forward-thinking in her approaches to learning and thinking about learning. Nut Island effect The Nut Island effect describes an organizational behavior phenomenon in which a team of skilled employees becomes isolated from distracted top managers resulting in a catastrophic loss of the ability of the team to perform an important mission. The term was coined by Paul F. Levy, a former Massachusetts state official, in an article in the Harvard Business Review published in 2001. The article outlines a situation which resulted in massive pollution of Boston Harbor, and proposes that the name of the facility involved be applied to similar situations in other business enterprises.

Information cascade An Information cascade or informational cascade is a phenomenon described in behavioral economics and network theory in which a number of people make the same decision in a sequential fashion. It is similar to, but distinct from herd behavior.[1][2][3] An information cascade is generally accepted as a two-step process. For a cascade to begin an individual must encounter a scenario with a decision, typically a binary one. Second, outside factors can influence this decision (typically, through the observation of actions and their outcomes of other individuals in similar scenarios).