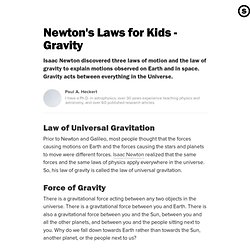 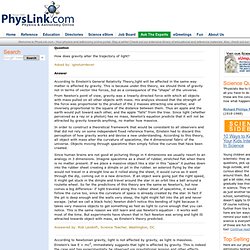 Asked by: ignotum4ever Answer According to Einstein's General Relativity Theory,light will be affected in the same way matter is affected by gravity. This is because under this theory, we should think of gravity not in terms of vector like forces, but as a consequence of the "shape" of the universe.

From Newton's point of view, gravity was a linearly directed force with which all objects with mass pulled on all other objects with mass. In order to construct a theoretical framework that would be consistent to all observers and that did not rely on some independent fixed reference frame, Einstein had to discard this perception of how gravity works and devise a new understanding. Since human brains are not good at picturing things in 4 dimensions we usually resort to an analogy in 3 dimensions.

Answered by: Rob Landolfi, Science Teacher, Washington, DC dF = 0 and d*F = 0. Newton's Laws for Kids - Gravity. Galileo Drops the Ball - Virtual Experiment. In around 1590 Galileo Galilei (1564-1642) climbed up the Leaning Tower of Pisa and dropped some balls to the ground. 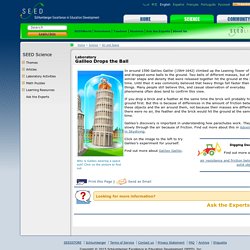 Two balls of different masses, but of similar shape and density that were released together hit the ground at the same time. Until then it was commonly believed that heavy things fall faster than light things. Many people still believe this, and casual observation of everyday phenomena often does tend to confirm this view. If you drop a brick and a feather at the same time the brick will probably hit the ground first. But this is because of differences in the amount of friction between these objects and the air around them, not because their masses are different. Galileo’s discovery is important in understanding how parachutes work. Click on the image to the left to try Galileo’s experiment for yourself.

Find out more about Galileo Galilei. ‎wps.pearsoncustom.com/wps/media/objects/3713/3803102/SCI321_Ch01.pdf. Drawing Free-Body Diagrams. Free-body diagrams are diagrams used to show the relative magnitude and direction of all forces acting upon an object in a given situation. 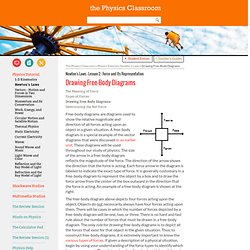 A free-body diagram is a special example of the vector diagrams that were discussed in an earlier unit. These diagrams will be used throughout our study of physics. The Meaning of Force. A force is a push or pull upon an object resulting from the object's interaction with another object. 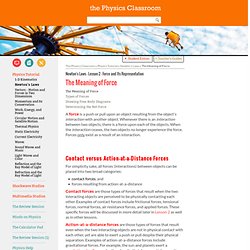 Whenever there is an interaction between two objects, there is a force upon each of the objects. When the interaction ceases, the two objects no longer experience the force. Forces only exist as a result of an interaction. Contact versus Action-at-a-Distance Forces For simplicity sake, all forces (interactions) between objects can be placed into two broad categories: Types of Forces. Create online tests - ClassMarker. Mrs. Nunn: Forces flashcards. Engineering Interact - Interactive science & engineering for 9-11 year olds. Determining the Net Force. If you have been reading through Lessons 1 and 2, then Newton's first law of motion ought to be thoroughly understood. 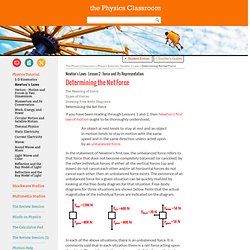 An object at rest tends to stay at rest and an object in motion tends to stay in motion with the same speed and in the same direction unless acted upon by an unbalanced force. In the statement of Newton's first law, the unbalanced force refers to that force that does not become completely balanced (or canceled) by the other individual forces. If either all the vertical forces (up and down) do not cancel each other and/or all horizontal forces do not cancel each other, then an unbalanced force exists. The existence of an unbalanced force for a given situation can be quickly realized by looking at the free-body diagram for that situation. Free-body diagrams for three situations are shown below. In each of the above situations, there is an unbalanced force. Observe in the diagram above that a downward vector will provide a partial or full cancellation of an upward vector. Teachers — Resources For The Classroom. Construction of Free-Body Diagrams.