Blue Feed, Red Feed. What is this? 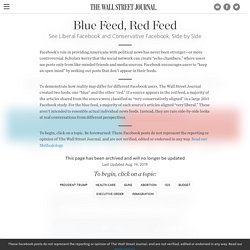 Recent posts from sources where the majority of shared articles aligned “very liberal” (blue, on the left) and “very conservative” (red, on the right) in a large Facebook study. PI TeensandTech Update2015 0409151. Aussie teens and kids online. The internet is an integral part of the lives of young people in Australia, with most going online regularly to learn, keep in touch with friends and have fun. 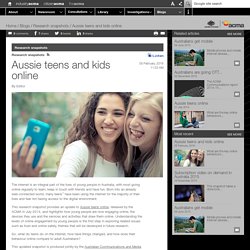 Born into an already web-connected world, many teens1 have been using the internet for the majority of their lives and fear not having access to the digital environment. Why Deadpool in X-Men Origins: Wolverine is Actually Way Better Than The 2016 Deadpool. Social media news consumers at higher risk of 'information bubbles,' IU study says: IU Bloomington Newsroom: Indiana University Bloomington. First large-scale empirical analysis of online news-seeking behavior compares diversity of news found on search, social Dec. 14, 2015 BLOOMINGTON, Ind. -- Indiana University researchers have found that people who seek out news and information from social media are at higher risk of becoming trapped in a "collective social bubble" compared to using search engines. 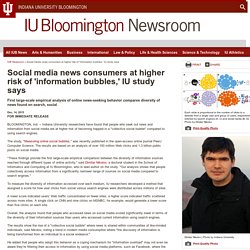 The study, "Measuring online social bubbles," was recently published in the open-access online journal PeerJ Computer Science. The results are based on an analysis of over 100 million Web clicks and 1.3 billion public posts on social media. Proof that the news is scripted. The aggressive political interview: it's not just Leigh Sales and Emma Alberici. YouTube is 10 years old: the evolution of online video. Allow me to make a bold statement: YouTube, at 10 years old, is the most interesting place on the internet. 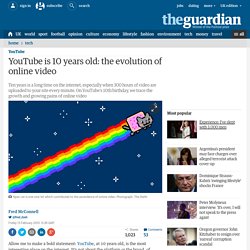 It’s not about the platform or the brand, of course, but rather the sheer amount of content it hosts and its diversity. 300 hours of video are uploaded to YouTube every minute. TV, TiVo, OTT: How television-watching has evolved. Per a 2013 Nielsen study, the number of American houses with TV units has been dropping since 2011. 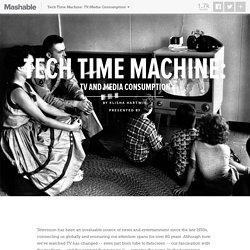 In fact, the U.S. had more than five million Zero-TV households in 2013, up from just over 2 million in 2007. People are making the switch from traditional cable companies to watching videos online on their mobile phones, or through streaming services such as Netflix, Hulu, Amazon Prime, etc. in a trend called “cord-cutting.” In an April 2014 report by Experian Marketing Services, they reported that “cord-cutting" had grown by 44% in the past four years, with 7.6 million households using high-speed Internet for streaming or downloading videos instead of traditional cable or satellite television.

Australian music across four decades – how our popular music has changed over time. Turn autoplay off Edition: <span><a href=" Sign in Beta. 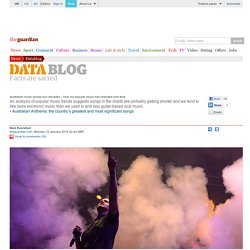 6 Subtle Ways The News Media Disguises Bullshit As Fact. As anybody who has ever wistfully imagined Keith Olbermann and Bill O'Reilly fighting to the death over a pit of lava knows, most media outlets are biased. 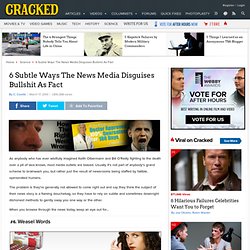 Usually it's not part of anybody's grand scheme to brainwash you, but rather just the result of newsrooms being staffed by fallible, opinionated humans. The problem is they're generally not allowed to come right out and say they think the subject of their news story is a flaming douchebag, so they have to rely on subtle and sometimes downright dishonest methods to gently sway you one way or the other. When you browse through the news today, keep an eye out for... When someone uses language that implies a definite fact without stating it outright, they're using weasel words. A history of video games in five anecdotes - A Short History of Video Games.

The history of video games is not just a history of technology, but one of creativity. 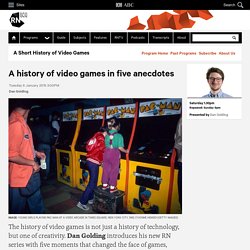 Dan Golding introduces his new RN series with five moments that changed the face of games, from Alan Turing's chess game to Pac-Man, a video game about eating, for women. Humans have always played. That’s the first thing I go back to when thinking about the history of games and play—we can’t return to the start of this story because play actually predates any kind of recorded memory. Is Gender-Flipping The Most Important Meme Ever? There’s an old analogy about boiling a frog alive. 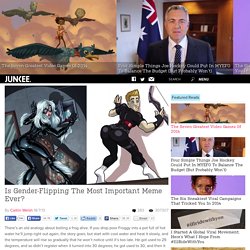 If you drop poor Froggy into a pot full of hot water he’ll jump right out again, the story goes; but start with cool water and heat it slowly, and the temperature will rise so gradually that he won’t notice until it’s too late. He got used to 29 degrees, and so didn’t register when it turned into 30 degrees; he got used to 30, and then it was 31, and so on. At The Movies: Data reveals Margaret and David's likes and dislikes. Updated. 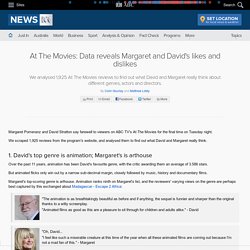 More Proof That News is Controlled by a Central Script Writer. Privacy Lost - Four Corners. By Martin Smith, PBS Frontline Updated October 6, 2014 21:32:00 Monday 6th October 2014 When a contractor from America's National Security Agency (NSA) downloaded tens of thousands of top-secret documents from a highly secure Government network, it led to the largest leak of classified information in history - and sparked a fierce debate over privacy, technology and democracy in the post-9/11 world. In leaking the files, Edward Snowden had not only exposed classified information, he also exposed how the US Government had co-opted major tech companies to help it spy on millions of people in the United States and around the world - including Australians.

That surveillance did not simply mean detailing the source and destination of communication, but the communications themselves. The program has special significance in the wake of new government legislation in the process of being passed in Australia. Australian Government to cut all funding to local games industry. The Australian game development scene has been dealt a massive blow overnight, with the latest Federal budget completely gutting the Australian Interactive Games Fund. The fund, announced in November 2012 by Simon Crean, had $10 million remaining for the 2014 – 2015 financial year. Senate Estimates: Who's advising Brandis on copyright policy? What’s the issue with Piracy in Australia? IiNet's Steve Dalby, explains why the Australian Government's approach to fighting piracy is completely backwards -- and won't work. This guest post contributed by our Chief Regulatory Officer at iiNet, Steve Dalby. Another news cycle, and yet again we see the recycled claims suggesting Australia is the worst nation in the world for Internet piracy.

This may not actually be the case, but there can be no debate that work still remains to be done to effectively combat piracy. The Australian Government is readying legislation, if news reports are to be believed, which would require ISPs such as iiNet to send infringement notices to our customers while, at the same time, blocking certain websites which provide access for customers to download and share unauthorised content. We believe the Government is heading down the wrong path if they’re serious about protecting copyright. Combating piracy. How the year 1999 changed cinema forever. It's not an entirely perfect science, as you're going to discover, to determine one year as a turning point in modern cinema. The Internet map. The map of the Internet Like any other map, The Internet map is a scheme displaying objects’ relative position; but unlike real maps (e.g. the map of the Earth) or virtual maps (e.g. the map of Mordor), the objects shown on it are not aligned on a surface.