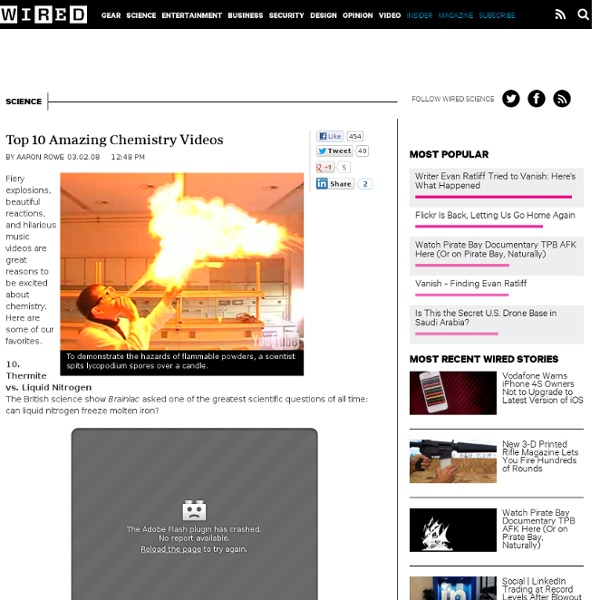 Fiery explosions, beautiful reactions, and hilarious music videos are great reasons to be excited about chemistry. Here are some of our favorites. 10. Thermite vs. Liquid Nitrogen The British science show Brainiac asked one of the greatest scientific questions of all time: can liquid nitrogen freeze molten iron? 9. 8. 7. 6. 5. 4. 3. 2. 1. If you have not had enough yet, check out the brilliant collection of Edward Kent.

Chemistry Now The National Science Foundation (NSF) has joined forces with NBC Learn and the National Science Teachers Association (NSTA) to celebrate the International Year of Chemistry by creating "Chemistry Now"--a weekly, online video series that uncovers and explains the science of common, physical objects in our world and the changes they undergo every day. The series also looks at the lives and work of scientists on the frontiers of the 21st century... More. This video explains and illustrates the molecular structure of sodium chloride (NaCl) crystals; the structure and symmetry of crystal lattices; and why one crystalline solid, salt, melts another, ice. Babies See Pure Color, but Adults Peer Through Prism of Language When infant eyes absorb a world of virgin visions, colors are processed purely, in a pre-linguistic parts of the brain. As adults, colors are processed in the brain’s language centers, refracted by the concepts we have for them. How does that switch take place? And does it affect our subjective experience of color? Such tantalizing questions, their answers still unknown, are raised by this developmental shift in color categorization, described today in the Proceedings of the National Academy of Sciences. To test the phenomenon, a team of British and English researchers asked adults and infants to focus on a briefly flashing target circle. Sometimes the target appeared in the subjects’ right visual fields – roughly speaking, the right half of a person’s field of vision, which is transmitted from the eyes to the brain’s left hemisphere, where language processing also takes place. Does this mean that adults and infants see the same colors differently? But might adults see colors differently?

chemsoc - for everyone interested in the chemical sciences We want everyone to experience the excitement and value of the chemical sciences. Our members and supporters reach out to connect people - from schoolchildren to scientists to political leaders - with chemistry. Whether you want to attend or run an event, set up a meeting or spend a few minutes writing an email, find out in this section how to get involved. Also in Campaigning & outreach: CampaigningFind out about our current campaigns and see how you can get involved in a way that suits you. PolicySee how we help to shape policy debates by providing expert information and leading the development of policy in key areas. OutreachFind out what we are doing to bring the chemical sciences to a wide range of different audiences, and how you can get involved. Tackling global challengesChemistry can help us avoid dangerous climate change, generate energy sustainably, feed the world, and tackle disease and illness.

How Much Sleep Do You Really Need? Sleep is one of the richest topics in science today: why we need it, why it can be hard to get, and how that affects everything from our athletic performance to our income. Daniel Kripke, co-director of research at the Scripps Clinic Sleep Center in La Jolla, Calif., has looked at the most important question of all. In 2002, he compared death rates among more than 1 million American adults who, as part of a study on cancer prevention, reported their average nightly amount of sleep. Q: How much sleep is ideal? A: Studies show that people who sleep between 6.5 hr. and 7.5 hr. a night, as they report, live the longest. Morbidity [or sickness] is also "U-shaped" in the sense that both very short sleep and very long sleep are associated with many illnesses—with depression, with obesity—and therefore with heart disease—and so forth. I think we can speculate [about why people who sleep from 6.5 to 7.5 hr. live longer], but we have to admit that we don't really understand the reasons.

How Believing Can Be Seeing: Context Dictates What We Believe We Scientists at UCL (University College London) have found the link between what we expect to see, and what our brain tells us we actually saw. The study reveals that the context surrounding what we see is all important -- sometimes overriding the evidence gathered by our eyes and even causing us to imagine things which aren't really there. The paper reveals that a vague background context is more influential and helps us to fill in more blanks than a bright, well-defined context. This may explain why we are prone to 'see' imaginary shapes in the shadows when the light is poor. Eighteen observers were asked to concentrate on the centre of a black computer screen. Every time a buzzer sounded they pressed one of two buttons to record whether or not they had just seen a small, dim, grey 'target' rectangle in the middle of the screen. "Illusionists have been alive to this phenomenon for years," continued Professor Zhaoping.

Chemical & Engineering News: What's That Stuff? You might ask yourself... What's That Stuff? Ever wondered about what's really in hair coloring, Silly Putty, Cheese Wiz, artificial snow, or self-tanners? C&EN presents a collection of articles that gives you a look at the chemistry behind a wide variety of everyday products. Sort: Alphabetically (Text Only) | Most Recent

A Beginner&#039;s Guide to Muslim Bioethics | Wired Science from When Sunni and Shiite scholars disagreed over the ethics of cloning animals, I wondered whether there were other bioethical conflicts in the Muslim world. Are Muslims split over stem cell research and genetically engineered crops? Generally speaking, do they approach biotechnologies in the same way — or variety of ways — as Western cultures? I posed the question to a handful of Muslim bioethicists. The first to respond was Brown University anthropologist Sherine Hamdy. Wrote Hamdy, I think it would be easy and reductionist to make this into yet another ‘Shiite vs. Would it be a bit too easy and reductionist, I asked, to then say that Muslims are less inclined to take an absolutist position and instead base their judgments by weighing the risks and benefits of each case? King Faisal University bioethicist Hamza Eskandarani [pdf] followed up with a list of medical and reproductive technologies permitted under Sharia law: Interesting stuff, and in some ways more progressive than I expected.

Classic ChemBalancer - Welcome This is the classic version of Chembalancer that teaches you how to balance equations for the first time. To play it, just press the "Start Game" button above. To play the other versions, click here. Teachers: Classic Chembalancer is for students who are learning to balance equations for the first time. Awards for original Classic Chembalancer site © 2005 Sulan Dun. Health | Single brain cell&#039;s power shown There could be enough computing ability in just one brain cell to allow humans and animals to feel, a study suggests. The brain has 100 billion neurons but scientists had thought they needed to join forces in larger networks to produce thoughts and sensations. The Dutch and German study, published in Nature, found that stimulating just one rat neuron could deliver the sensation of touch. One UK expert said this was the first time this had been measured in mammals. The complexity of the human brain and how it stores countless thoughts, sensations and memories are still not fully understood. Researchers believe connections between individual neurons, forming networks of at least a thousand, are the key to some of its processing power. However, in some creatures with simpler nervous systems, such as flies, a single neuron can play a more significant role. This could mean that, within a single neuron, different synapses could be storing or processing completely different bits of information.

Periodic Table of Elements and Chemistry