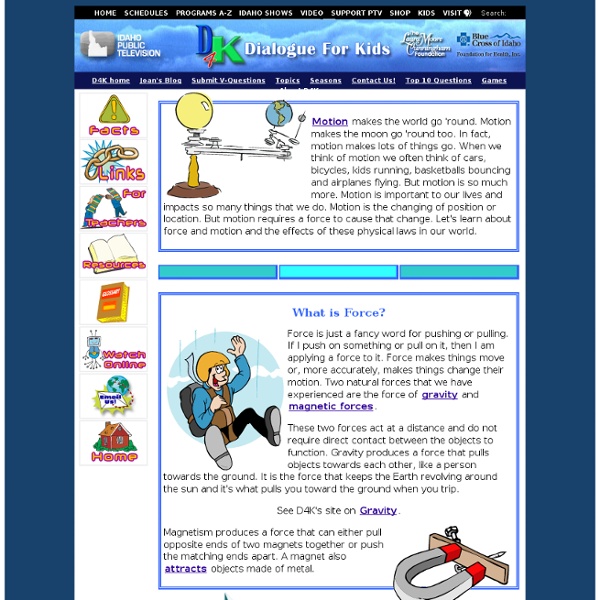 Motion makes the world go 'round. Motion makes the moon go 'round too. In fact, motion makes lots of things go. When we think of motion we often think of cars, bicycles, kids running, basketballs bouncing and airplanes flying. But motion is so much more. Motion is important to our lives and impacts so many things that we do. What is Force? Force is just a fancy word for pushing or pulling. These two forces act at a distance and do not require direct contact between the objects to function. See D4K's site on Gravity. Magnetism produces a force that can either pull opposite ends of two magnets together or push the matching ends apart. Types Of Contact Forces There are 6 kinds of forces which act on objects when they come into contact with one another. Let's investigate how these forces can be seen in our lives. Normal Force A book resting on a table has the force of gravity pulling it toward the Earth. Applied Force Frictional Force Tension Force Spring Force Resisting Forces What is Inertia?

Isaac Newton Facts, Quotes, Gravity, Laws of Motion, Universal Gravitation Born in England, Isaac Newton was a highly influential physicist, astronomer, mathematician, philosopher, alchemist and theologian. In 1687, Newton published Philosophae Naturalis Principia Mathematica, what is widely regarded to be one of the important books in the history of science. In it he describes universal gravitation and the three laws of motion, concepts that remained at the forefront of science for centuries after. Newton’s law of universal gravitation describes the gravitational attraction between bodies with mass, the earth and moon for example. Newton’s three laws of motion relate the forces acting on a body to its motion. The first is the law of inertia, it states that ‘every object in motion will stay in motion until acted upon by an outside force’.

Motion: Laws of Motion There was this fellow in England named Sir Isaac Newton. A little bit stuffy, bad hair, but quite an intelligent guy. He worked on developing calculus and physics at the same time. During his work, he came up with the three basic ideas that are applied to the physics of most motion (NOT modern physics). The first law says that an object at rest tends to stay at rest, and an object in motion tends to stay in motion, with the same direction and speed. You can see good examples of this idea when you see video footage of astronauts. The second law says that the acceleration of an object produced by a net (total) applied force is directly related to the magnitude of the force, the same direction as the force, and inversely related to the mass of the object (inverse is a value that is one over another number... the inverse of 2 is 1/2). Or search the sites for a specific topic.

Newton's Laws of Motion The motion of an aircraft through the air can be explained and described by physical principals discovered over 300 years ago by Sir Isaac Newton. Newton worked in many areas of mathematics and physics. He developed the theories of gravitation in 1666, when he was only 23 years old. Newton's first law states that every object will remain at rest or in uniform motion in a straight line unless compelled to change its state by the action of an external force. The second law explains how the velocity of an object changes when it is subjected to an external force. F = m * a For an external applied force, the change in velocity depends on the mass of the object. The third law states that for every action (force) in nature there is an equal and opposite reaction. You can view a short movie of "Orville and Wilbur Wright" explaining how Newton's Laws of Motion described the flight of their aircraft. Activities: Guided Tours Newton's Laws of Motion: Navigation .. Beginner's Guide Home Page

The Car and The Wall According to Newton's first law, an object in motion continues in motion with the same speed and in the same direction unless acted upon by an unbalanced force. It is the natural tendency of objects to keep on doing what they're doing. All objects resist changes in their state of motion. In the absence of an unbalanced force, an object in motion will maintain its state of motion. This is often called the law of inertia. The law of inertia is most commonly experienced when riding in cars and trucks. But what would happen if the passengers were not wearing the seat belt? If the car were to abruptly stop and the seat belts were not being worn, then the passengers in motion would continue in motion. Now perhaps you will be convince of the need to wear your seat belt. For more information on physical descriptions of motion, visit The Physics Classroom Tutorial. Newton's First Law of MotionInertiaState of MotionBalanced vs.