Scientists Can Now Extract, Record and Return Information To the Brain 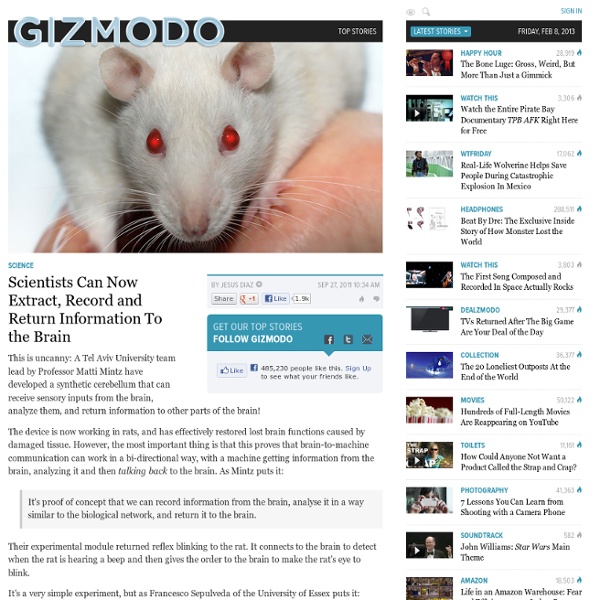 A paralyzed woman flies a fighter jet with her mind Back in February of 2012, a paralyzed 55 year old mother Mrs. Jan Schuermaan participated in an experiment led by a team of researchers at the University Of Pittsburgh School Of Medicine. The team of researchers implanted electrode grids with tiny contact points originally meant to control her arm and hand movements. With a simple computer algorithm, signals gathered from individual neurons were grouped into patterns. “Within a week of the surgery, Ms. After 2 years since the surgical implants of the electrode grids, Mrs. The project of DARPA was to control a Multirole fighter called F-35 (picture below) in a simulator purely by her mind. Surprisingly, Mrs.

Cyborgs – scientists create biological tissue with embedded wiring Under its human skin, James Cameron’s Terminator was a fully-armored cyborg built out of a strong, easy-to-spot hyperalloy combat chassis – but judging from recent developments, it looks like Philip K. Dick and his hard-to-recognize replicants actually got it right. In a collaboration between Harvard, MIT and Boston Children's Hospital, researchers have figured out how to grow three-dimensional samples of artificial tissue that are very intimately embedded within nanometer-scale electronics, to such an extent that it is hard to tell where one ends and the other begins. Putting aside futuristic cyberpunk dreams, embedding electronics deep within biological tissue has concrete and immediate uses in the applied sciences of today, because it could lead to a finely tuned, two-way communication link between the biological and the synthetic. So far, our attempts at creating an intimate blend of lab-grown tissues and nanoscale electronics have led to mediocre results at best. Share

​Minute machines dive inside a living creature for first time — RT News Published time: January 23, 2015 16:10 Reuters / Phil Noble Researchers at the University of California have managed to implant acid-powered, self-destructing micromotors inside a living animal for the first time. It's hoped the tiny devices could help tackle maladies such as peptic ulcers in the future. The tiny machines just 20 micrometers long and roughly a human hair's width, managed to deliver nano-particles to the stomach of a mouse without any side effects. The self-propelled devices, made of polymer tubes and coated in zinc, self-destruct without leaving any traces of harmful chemicals. “The body of the motors gradually dissolves in the gastric acid, autonomously releasing their payloads, leaving nothing toxic behind,” Professors Liangfang Zhang and Joseph Wang, who lead the research, wrote in the journal ACS Nano. While the machines dissolve, they deliver their vital contents into the stomach tissue.

DARPA Program Seeks to Use Brain Implants to Control Mental Illness Researcher Jose Carmena has worked for years training macaque monkeys to move computer cursors and robotic limbs with their minds. He does so by implanting electrodes into their brains to monitor neural activity. Now, as part of a sweeping $70 million program funded by the U.S. military, Carmena has a new goal: to use brain implants to read, and then control, the emotions of mentally ill people. This week the Defense Advanced Research Projects Agency, or DARPA, awarded two large contracts to Massachusetts General Hospital and the University of California, San Francisco, to create electrical brain implants capable of treating seven psychiatric conditions, including addiction, depression, and borderline personality disorder. The project builds on expanding knowledge about how the brain works; the development of microlectronic systems that can fit in the body; and substantial evidence that thoughts and actions can be altered with well-placed electrical impulses to the brain.

Functional 3D Brain Tissue Successfully Grown From Stem Cells The ultimate goal of stem cell research is to create functional replica tissues and organs for use as replacements in times of injury or disease, or for use in the development of drugs and other therapeutic techniques. Getting tissues to grow in the lab in three dimensions has been challenging across the board, but this is especially problematic for structures in the nervous system. Beyond getting the neurons to grow at all, they must be connected in a very particular manner in order to function. A major step forward has been taken on this front by a team from RIKEN Center for Developmental Biology in Japan, who state in Cell Reports that they have successfully grown 3D functional brain tissue that has even grown with proper patterning. The brain tissues were grown from human embryonic stem cells, and growth factors were added in series throughout development. Read this next: Richard Dawkins Reads Hate Mail From “Fans”

​Scientists learn to selectively erase and restore memories in brain Published time: June 04, 2014 23:41 Edited time: June 06, 2014 23:19 Reuters / STR Wiping out memories at a press of a button – just like with a ‘neuralizer’ from the Men in Black movie – may soon become a reality. Researchers have managed to erase and then restore lost memory in genetically modified rats with a flash of light. The study by researchers from University of California in San Diego, published in Nature journal , is the first cause-and-effect evidence that strengthening or weakening connections between neurons in the brain can influence particular memories. “We can form a memory, erase that memory and we can reactivate it, at will, by applying a stimulus that selectively strengthens or weakens synaptic connections,” study senior researcher Dr. The neuroscientists’ findings may hold big potential for the treatment of such diseases as Alzheimer's and post-traumatic stress disorder (PTSD). AFP Photo / Marco Longari

Artificial Neurons Can Communicate in the Same Way as Human Neurons Synopsis This artificial neuron contain no ‘living’ parts, but is capable of mimicking the function of a human nerve cell and communicate in the same way as our own neurons do. Summary To date, the primary technique for neuronal stimulation in human cells is based on electrical stimulation. Scientists discover whole new state of matter Most people are familiar with some of the common states of matter: solids, liquids and gases. Scientists also recognize a fourth state of matter — plasma — that is commonly observable here on Earth, as well as a host of other states that can only be created in the lab, such as Bose–Einstein condensates and neutron-degenerate matter. Jahn-Teller metals can now be added to this list, a state which appears to have the properties of an insulator, superconductor, metal and magnet all wrapped into one. It's the material's superconductivity which might be the most interesting trait, however. It has the potential to achieve superconductivity at a relatively high critical temperature ("high" as in -135 degrees Celsius as opposed to the sub -243.2 degrees Celsius required by many ordinary metallic superconductors), which is significant for the science of superconductivity. Related on MNN:

Worm ‘Brain’ Uploaded Into Lego Robot Worm ‘Brain’ Uploaded Into Lego Robot Can a digitally simulated brain on a computer perform tasks just like the real thing? For simple commands, the answer, it would seem, is yes it can. While there are already similarly capable robots using traditional software, the research shows a digitally simulated brain can behave like its biological analog, and the demonstration has implications for big brain projects. The BRAIN Initiative in the US and the Human Brain Project in Europe aim to map the human brain’s connections and, one day, to simulate the brain digitally. But when it comes to simulating brains in silica—it’s sensible to start simple. C. elegans. C. elegans is an eminently humble creature, and for that reason, an extensively researched one. The worm’s brain contains 302 neurons and 7,000 synapses. The robot, as you can see in the video, moves a little like a Roomba, with one critical distinction—the Roomba’s collision avoidance mechanism was written in by programmers.

Tiny Scallop-Like Robots Designed To Deliver Drugs Through The Bloodstream To Treat Diseases - Futurism Synopsis Researchers in Germany have developed a "scallop-inspired" tiny robot small enough to travel through the bloodstream, and it doesn't require an engine or batteries Summary The idea for the new robot was inspired by the scallop, which moves around by opening and closing a pair of shells. The robot moves through a non-Newtonian fluid by performing what looks like horizontal jumping jacksThe tiny bots can be printed on a 3D printer, and many of them could be directed at once with a single magnetThe team doesn’t have any particular applications in mind for their robots, but it’s clear that they could be used to send medication to single spot, such as to kill tumors

IBM Develops a New Chip That Functions Like a Brain - NYTimes.com Photo Inspired by the architecture of the brain, scientists have developed a new kind of computer chip that uses no more power than a hearing aid and may eventually excel at calculations that stump today’s supercomputers. The chip, or processor, is named TrueNorth and was developed by researchers at IBM and detailed in an article published on Thursday in the journal Science. The chip’s electronic “neurons” are able to signal others when a type of data — light, for example — passes a certain threshold. The processor may thus be able to recognize that a woman in a video is picking up a purse, or control a robot that is reaching into a pocket and pulling out a quarter. The chip contains 5.4 billion transistors, yet draws just 70 milliwatts of power. Today’s conventional microprocessors and graphics processors are capable of performing billions of mathematical operations a second, yet the new chip system clock makes its calculations barely a thousand times a second. The first, Dr.

Researchers Connect Animal Brains To Share Thoughts and Solve Challenging Problems - Futurism | Futurism Successful experiments have shown that it is possible to link brains to make an "organic computer" that can synchronize thoughts and communicate between minds. Organic Computing Brains consistently beat computers in tests of reasoning, offering a creativity and logic that computers are only picking up now through deep-learning. Two Brains are Better than One At this point, you may be wondering: how exactly do they connect the brains? Another experiment created a brainet out of multiple rats, this time using their brains as a communication mechanism. A Future with Telepathy Although Nicolelis’ study produced significant results through brain linking, there are moral and practical issues that arise from the brainet procedure. Still, Nicolelis’ experiments have a ways to go before mind reading becomes reality. “I can imagine surgeons coordinating surgery together or mathematicians visualizing the solution to a problem together.

Scientists 'reactivate' Alzheimer's patients' memories Scientists in America are hopeful of a breakthrough in curing Alzheimer's, following a study that shows a way of bringing back the lost memories of dementia patients. Researchers at the University of California, San Diego School of Medicine have erased and successfully reactivated memories in rats, offering hope that the same can be achieved with humans. The study, published next month, is the first to show the ability to selectively remove a memory and then reactivate it. This is done by stimulating nerves in the brain at frequencies that are known to weaken and strengthen the connections between nerve cells, called synapses. Roberto Malinow, a professor of neurosciences and senior author of the study, said: "We can form a memory, erase that memory and we can reactivate it, at will, by applying a stimulus that selectively strengthens or weakens synaptic connections. Photo / Thinkstock - Independent